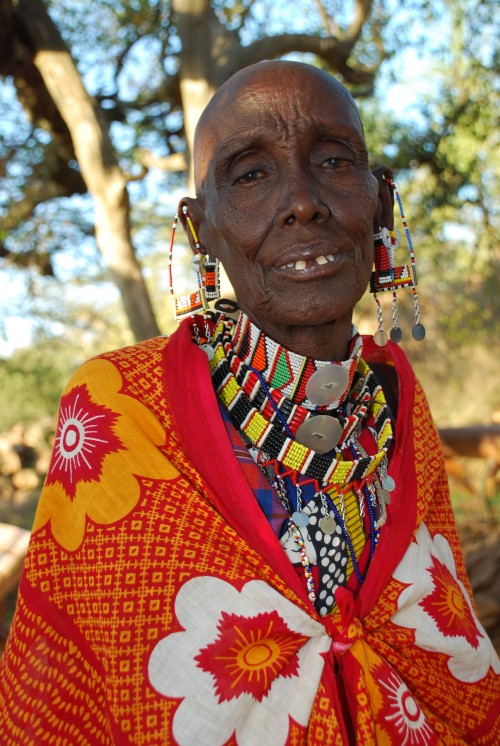 Encounter with the Masai tribes of Kenya

Passing through the forest, we soon set our eyes upon the

dreams and I could not but involuntarily exclaim:” What

Fried Eye notes– We are bringing before you some of our special posts in every issue as a part of special promotions on our part to offer better visibility to those deserving articles. This article had already been published previously but we believe you will enjoying going it through again.

At first sight it looked strange that there were men and women walking alongside the roads with heavy loads – closer look revealed that each tribe’s person was carrying part of their hut, walls, doors and roof strung to their shoulders. The elders were in the front followed by women. Adolescent boys and girls were herding cattle. These are the Maasai pastoral nomadic tribes of Kenya. They walk for miles carrying their homes on look out for fresh pastures where they will re-assemble their homes in a circular formation. The circle of huts (known as Enkang in Maasai – Maa language) is surrounded by acacia thorn bushes which act as barbed wire to keep wild animals at bay. Maasai ancestors originated from North Africa, they followed the course of River Nile conquering many tribes on the way to eventually settle in the lush green valleys of escarpment in Kenya and Tanzania. The rift valley known as the escarpment was result of volcanic action that created Mount Longonut, lakes and massive sunken valleys. The lava provided fertile pastoral land where they graze their cattle. Their migration continued to south of Kenya to Tanzania. Today, their homeland is bounded by Lake Victoria to the west and Mount Kilimanjaro to the east including picturesque Ngorongoro Crater which also shelters one of the most beautiful wildlife lion country havens.

They are very tall, handsome and almost sharp Arabic features. The warriors carry spears and a double edged flat knife called Simi. Originally, they wore animal skins. Indian traders who migrated to Kenya introduced them to blankets – selling these from their shops called Duka in remote areas. Maasai men are hunters and women/girls role is as gatherers. It is a male dominated society and polygamy is a norm. Additionally, circumcision rite brothers have a right over each other’s wife. Maasai men have pierced ear lobes and these lobes have been stretched until a hand can be put through. Sometimes to stop from dangling they wrap it around the ear. Women, remove gourds from jungle vines, clean these and use as storage utensils for milk and honey. Apart from these roles girls also build huts and perform domestic cooking chores. Women and adolescent girls construct their dwellings known as Manyatta. It is constructed using branches for wooden structure and plaster is made of cow dung and mud. The walls and roofs are detachable which can be carried with them to their next stopping place.

Tribal hierarchy is led by the Maasai elders who often organise bonding ritual blood drinking sessions within the tribes. The cow’s jugular vein is pierced with arrows and blood is collected in gourds which are passed around the men folk. Adolescent boys and girls romp together. However separation of sexes occurs when the boys gather for manhood ceremony. These are communal circumcisions and the participants acquire the title of Moraine. This is the right of passage to adulthood. Those who are circumcised together also become brothers with right to each others wife. In the old days they had to prove their manhood by killing a lion with a spear single-handed. Nowadays this is illegal and banned. However, the practice of lion hunting is still existent but in search of lions that prey on their livestock or threaten a particular area of inhabitants.

Cattle are integral part and parcel of Maasai lives. They believe that when the earth and sky split, God bequeathed cows to them. As all the cattle belong to them according to God’s edict, it therefore follows that rustling and stealing herds from other tribes in not sinful. They believe that they were placed in the centre of universe by God as the chosen people.

The material wealth is measured in number of cows a man owns. A woman’s worth depends on how many cows will her father demand for dowry. Since Maasai practice polygamy, a man with many wives is considered wealthy because he has been able to get many wives by parting with his cattle.

“The traditional Maasai calendar has no designated holidays. It is divided into twelve months belonging to three main seasons: Nkokua(the long rains), Oloirurujuruj(the drizzling season), and Oltumuret (the short rains). The names of months are very descriptive. For example, the second month of the drizzling season is Kujorok , meaning “The whole countryside is beautifully green, and the pasture lands are likened to a hairy caterpillar.”*(source – Everyman.com)

Having read about the Maasai tribesmen, their culture and traditions in our geography lessons, our teacher arranged for a field trip for us to live amongst the Maasai in a Manyatta for a week. We set off from Nairobi and travelled through the picturesque rift valley. At the bottom of the rift valley is a church built by Italian prisoners of war. Though missionaries tried to convert Maasai, they have steadfastly refused to yield their beliefs, culture and traditions. This church has never been attacked by them.

Further on past the church – one is travelling at the floor of the rift Valley – past Mt Longonut. It is about 1500 meters high. We stopped here to climb the mountain which is easy climb and has a crater at the top. Next to the mountain is Lake Navivasha. It is a beautiful fresh water lake. Nearby is Lake Nakuru which is home to the flamingos. Maasai legend states, “the day these lakes dry, the mountain will erupt spewing out red hot lava” – the lakes keep the lava cool. We walked around the crater looking down into the depths from where lava emanated once upon a time. Wild animals live in the crater. Our first encounter was with Maasai warriors who appeared out of nowhere with menacing spears whilst we were descending. This apparently turned out to be the advance guard sent by the Manyatta elders to escort us. We were naturally treated with great curiosity by Maasai women and girls. Though men and boys were curious but it would be against their tradition to show it. Women and girls, touched and felt our hair as they had never had close encounter with straight hair men. After customary exchange of gifts, we sat down for a feast. Two goats were slaughtered to honour the guests. I declined to drink blood. Maasai girls built wooden fire on which the goats were roasted. They also made a maze meal for us called Ugali to be eaten with meat. The roasted meat is known as Nayama Choma. Each one of us was given a knife to tear the meat of the goat. This communal eating was great bonding session. Home made brew blew our heads off. Indians had introduced them to vegetable salad which they call Kuchumbri.

Staying in these huts, each individual hut is called Enkaji was quite an experience. At night it was scary as it appeared all the wild animals in the jungle howled relaying messages about presence of strangers in Manyatta. We went herding with Maasai Moran – circumcised boys who are now considered as men. They were surprised that at our ages, we hand not undergone this ceremony. We saw women create elaborate designs of beads, necklace and wrist bands. They also mix lava rich red soil with ochre to anoint their skins and hair. It is in reality really sun cream – protection against the sun heat and rays. They also introduced us to their dance – standing in circle, chanting and jumping sky high – as they continued jumping up, it induces a trance. We were quite dizzy trying to keep up with them.

We returned with pleasant memories of encounters with the Maasai. Males do not display emotion which would be akin to admission of weakness of character. Some women and girls wailed. Some asked us to return to make a baby for them with long straight hair. We returned to Nairobi taking a detour via the house where Joy Adamson and George Adamson of Born free fame lived. Their residence abounds with bushy tailed colobus Monkeys. The bottom of the garden borders with another lake called Crater Lake. During our visit George was away on safari and she met us. She was very pleasant lady though had fame of being very cantankerous towards humans.

In 2008, I travelled through the Maasai Land, climbed Mt. Longonot our favourite childhood haunt, went past several Enkang – but the one where I stayed had moved on to fresh pastures with their huts – Instead, I saw that the Maasai were now trading handicrafts made by them, selling to tourists, refusing to have a photo taken unless they were paid in cash. They also only accepted American dollars – spoilt by American tourists. Maasai now go to rural schools and some have started wearing western attire. However, hardcore of the Maasai tribe still retain their culture, traditions and beliefs and have refused to convert or move to the cities.

My nephew has purchased a farm in the Maasai area. It was during this visit that we were warned that two rogue lions were at large. One Maasai girl who had been herding cows and sheep witnessed lions kill one sheep. She ran to the village and another Maasai girl who was on vacation joined us for the lion hunt. She was now working as a receptionist in one of five star hotels in Nairobi city. Though she was adamant about Maasai traditions, beliefs – her role in their society had changed with education. Others will follow the suit. One of the most prominent Maasai is Cabinet Minister of Kenya – Professor George Saitoti.

In the Maasai lands one also find some cafes for the tourist trade – The favourite snack is Maru’s Bhajia pioneered by one Gujrati trader in the 1930’s. Several Gujrati shop owners selling provisions in this area speak fluent Maasai language. Exposure to them has also changed Maasai cuisine- they utilise similar tadka to prepare some dishes. Tadka cuisine is called Karoga cuisine.

My close encounter left a lasting impression on my mind of these fearless warrior tribes.

Their pastoral lands are now being acquired by developers who want to spin out high rise apartments to carter for growing urban population. This development not only cuts through their lands but also migration routes of wild animals. Maasai too are one of the tourist attractions nowadays and earn money by performing traditional dances for the tourists. Part of the dance routine is to invite one of the tourists to pretend being a Maasai and dance like them.

In large cities like Nairobi, Maasai are in demand as low paid – night watchmen. Their reputation as fierce warriors with spears provides a backdrop to employ them. Little can a spear wielding night watch man can do faced with armed robbers wielding guns and machine guns.

A traditional dance that has been debased to appease the tourists. Maasai warrior appear to be irresistible to western women, and especially sophisticated white European women from many parts of Europe and America, who carry off their lovers to the west by marrying them. They have glare of publicity in tabloids but most marriages flounder with the ex-massai lover heading back to where he belongs.

One day we may have to launch a campaign to save the Maasai culture, traditions and beliefs.

A trip to the Land of Thunder Dragon