Bhutan – In Pursuit Of Happiness

“Who gave you the bright idea to travel in Bhutan on a bike now?” I was asked this question a number of times as I travelled through Bhutan in January. I never mentioned that it was my “bright idea!”  It was a right question too. We never saw any other biker in those 10 days that we stayed in the tiny Himalayan Kingdom.  It was bitterly cold!

The snow took a heavy toll on us and the bikes…the lack of oxygen in the higher altitude made breathing a little difficult for the bikes as well as the riders. They were missing and were having a tough time pulling…I could have set things right by adjusting the mixture screw but didn’t have the courage to take off the gloves.

Well, snow or rain, I decided that I am going to enjoy my tour of Bhutan. It has been almost 25 years since I had been in the Land Of The Thunder Dragon and this time I intended to travel much more than I did all those years back.

Jaigaon borders the Bhutanese town of Phuntsholing and it is a typical border town – loud, crowded to the brim and chaotic. After the long stretches of open roads, the last 5 kms to Phuntsholing took us an eternity to cover. We shared the road with overloaded truck, buses and impossibly crowded mini buses with the handyman calling for more passengers and honking like crazy, carts pulled by huge oxen, autos, brightly coloured rickshaws, bicycles and people. It is a wonder how crossing a simple gate leads to a different world altogether…literally.

As soon as we crossed the Dragon gate, the cacophony ceased altogether. The traffic moved in an orderly manner, there were no three wheeler, no overloaded trucks and buses and certainly no animals on the road. No one seemed to be in any tearing hurry to get anywhere soon. As we walked down to the immigration office, we were pleasantly surprised to see the cars stop whenever we wanted to crossed the street and we never had to lift our hands to signal the cars to stop like we do here!  And I guess we were the only ones who were honking as we rode on the highway.  Some drivers did give us some dirty looks as we overtook and I wondered why.  But then I realised that we were honking even when they readily let us pass as soon as they saw us in the rear view mirror.  After a few days in the kingdom, we also got used to riding without blowing the horn and in a much disciplined manner. The threat of getting hauled up by the police in a foreign land also turned us into extremely decent riders almost overnight.

It is absolutely amazing that even in this age of high end technology, Bhutan has, to a very large extent, managed to hold on to its tradition and custom.  One is not allowed into government offices without their traditional attire. We had to sit outside as our agent went into the Home Department and Immigration offices at Phuntsholing and Thimpu to get our travel permits.  The people still greet you in the traditional manner, a handshake and a little bow or with a folded hand greeting. Even at busy shopping centers, the shopkeepers will hand over the money with the left hand supporting by the right hand. It is a humbling experience.

For more than a millennium, this tiny Himalayan kingdom has lived in isolation. Set in between India and China, the country was given the miss by most travelers both due to its geographical position and by govt. policies. Although this has kept much needed development away, it has also saved the country from the ravages that invariably comes with development.

Very often, Bhutan is referred to as the last Shangri-la and with very good reasons too. Almost three quarters of Bhutan is still forested and the Govt. has designated about 25 per cent of this as National Parks and other protected area. The natural beauty is all encompassing mist covered hills, ancient pagodas and monasteries perched on high hills with sheer drops, sacred forests, crystal clear rivers and snow covered high mountain passes.

After we finished our paper works (permits till Thimpu) we hit the road to Paro.  The roads are wide and very well laid and all along the way we could see personals of BRTF working on the highway. Paro is about 160 kms from Phuntsholing but the journey took at least 3 hours more than what it should have. We couldn’t help but stop every few kilometres. The cameras came out and everyone went click! click! click! The mesmerizing landscapes got the better of us and we decided to let it be that way.

Paro has the only airport in Bhutan with some good hotels too. Since January is an off season, we got some very good bargains. Motorcyclists are always look for cheap stay options. What we can save on accommodation, we can spend on some fuel and travel for some extra miles!

Roads in Bhutan were not always this good. Till about the 1960s, when the country started opening up to the outside world, there were no roads, no vehicles, no telephone and electricity. Poverty and illiteracy were very high.  But that is all in the past now.

King Jigme Singye Wangchuk, the father of the present King Jigme Khesar Namgyel Wangchuk, worked hard since his ascent to the throne in 1972 to make the country prosperous. He coined a new and innovative phrase to measure the wealth of his country… ‘Gross National Happiness.’ To outsiders, it might seem a marketing tool but it ain’t.  The men on the street swear by this phrase. Gross National Happiness is after all guided by a set of rules – sustainable development, environmental protection, cultural preservation and good governance. And by the look of it, the monarchy has been able to live up to its own guidelines.

As we rode ahead of Paro, we saw an example of cultural preservation. We visited the Paro Dzong, the oldest Dzong in Bhutan. It was destroyed in a devastating fire many years ago and lay in ruins. It is now a protected monument and the magnificent ruins stand silently atop a hill and look down to the valley below. One look at the ruins and one is sure to think aloud ‘how on earth did they make this huge structure right out of the cliff?’

Construction is strictly monitored and is not haphazard.  The administration in our hill stations can surely learn the art of sustainable development from Bhutan.  Logging and mining is at very controlled rate and the only natural resource that Bhutan really seems to have exploited is water, there are a lot of hydropower projects and they sell the power to India.

Tourism is also a big source of income but the Government has managed to keep cheap tourism out. While Indians pay the normal rates, westerners have to shell out USD250 per day. Although it takes care of the accommodation, food, car rental, guide and sightseeing, it is still on the higher side.  But this also keeps out the unwanted backpacking hordes. Just look what the backpackers did to places like Manali.  They come in hordes, stay in really cheap places and they contaminate more than they contribute to the economy.

Paro to Thimpu is another stretch of great road. As we entered Thimpu, we became very well behaved. I can’t recall the last time when I rode at such controlled speed for such long distances! Cameras along the highway, Police on bikes ….I didn’t want to take any chances in the Land of Happiness. I didn’t want to be the sad one behind bars!

Thimpu is just as clean, beautiful and disciplined. Somehow I felt that life here moves as in a conveyer belt, very orderly and in a straight line. But I was wrong to a large extent. The people are extremely fond of their King, enamoured is a better choice of word.  In this 21st century, absolute monarchy does not exist anywhere else. The monarchy is constitutional everywhere as people want more freedom and democracy. But in Bhutan, when King Jigme Singye Wangchuk abdicated his throne in 2006 and bought in democracy, there were people who mourned. They mourned because they could not imagine a life without their beloved King as the absolute leader and also because they were sceptical of the new system of democracy. 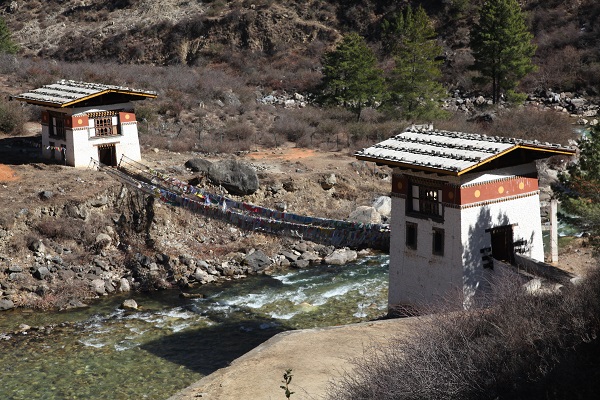 We did a day trip to Punakha to see the amazing Punakha Dzong. I had seen picture of the Dzong and forever wanted to visit it. It stands in between two rivers and from vantage points, it looks absolutely riveting. When the water rises, the reflection of the white, yellow and burgundy Dzong on the water is something that one can gape at for a very long time.

The Dzong is huge and houses some Government departments as well as the religious sections. Exploring the Dzong with the heavy boots, jackets and bags sure works up an appetite and at a lovely eatery along the way, we had some red ride, dal, boiled vegetables, beef with cheese and some large pieces of fried pork.  I forgot that tobacco products like cigarettes and zarda are banned in Bhutan and went to a shop to buy cigarettes. A monk with burgundy stained teeth that matches his burgundy robes, smiled and said that a smoke might be relaxing at that moment but it might get me into a lot of tension if I get caught! One can legally import a limited number of smokes but only for personal consumption and after paying a 100 per cent tax. I decided it is not worth the trouble and I can very well stay without a smoke for 10 days.

Back in Thimpu, we visited the museum which has a very impressive collection of artefacts from a very early period of Buddhism.

The sun goes down rather early and after dark, there is not much that you can do although there are some lovely restaurants and bars in the city centre. The place abounds in karaoke bars and snooker clubs. We visited some karaoke bars where young girls and boys sang and if you request a song or dance, you will have to shell out. You can sing in some bars and they have a good collection of songs.

For all the traditional lifestyle that is evident everywhere, I also saw a whole lot of western culture among the younger generation. The Kingdom allowed TV only in 1999 and with half of the 7 lakh population below the age of 25 years; they took to it like fishes to water. MTV culture reigns. I visited a lot of the pagodas and they were full of elderly people going in circles with their prayer wheels, sitting and chanting prayers and spinning huge prayer wheels and some were prostrating continuously….without a break. There were few young people there.

It has been 8 years or so of democracy now and although the nation has by and large managed to hold on to King Wanchuck’s idea of Gross National Happiness, some evils of modernisation is bound to creep in. that’s inevitable.

For me, it has been a very Happy tour of Bhutan and it converted me into a much disciplined road user and a responsible citizen too. Riding a motorcycle in Bhutan in Happiness indeed!!

It is an amazingly beautiful country. Travel with a sense of responsibility and you will enjoy it immensely. But if you act in an irresponsible and rash manner, the Thunder Dragon will strike you down…Beware!!