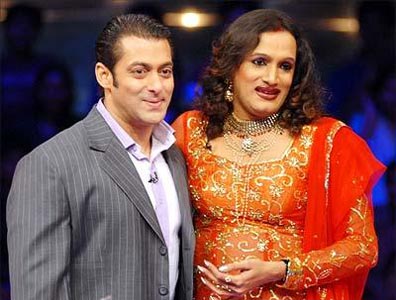 “It will not do you good to be seen with me nor will it be beneficial to me” she said to me. I had not expected her to come at my bidding to the vacant parking lot, but she did come true to her words. And some tense and nervous moments later, she spoke my mind. That sentence was the essence of what it all was about-A great divide between her world and mine.

Who was she? Was she rich and I was poor? Was she uneducated while I had ‘foreign’ degrees to boast of? Was she of a different caste, religion or community from mine? Was she a woman of the night while I earned my bread in a manner society deemed respectable?

Maybe a little of all, but none as starkly different as what she was!

Begging is a common sight in Indian streets and traffic points and so are the eunuchs – the gaudily dressed and brightly made up faces, who come up to the halting cars, with their characteristic claps. Somewhere in this scenario you might miss out another common scene- of car windows sliding up fast, faint clicks of locking doors and averted gazes- bit apprehensive, bit nonchalant. There is a different way how people behave towards the two groups of alms seekers. While the rag pickers are hurriedly shooed away, people are slightly differential towards the eunuchs. Differential yes, because they are feared, but with a hint of loathe.

Ask any Indian about the hijras and you will elicit a snigger, some myths, but you will hardly get any hard facts other than Wikipedia fed medico legal anatomical physiological statistics and information.

It’s another world altogether, to which no one had been. And whoever had been there, never comes back to tell the tale. So there remains a divide, some myths and a whole lot of misconceptions.

Hijras are feared as well as despised not as much for their physical attributes than for their mannerisms. Aggressive,

uninhibited, they are quite vociferous in their demands as well as curses and abuses. Many in fact fear their abuses more than anything else.

In spite of my self-delusional neo thinker attitude, I too am no different from the others in that I am quite wary about the third gender. There were whispers of transsexuals involved in crimes, from petty to severe ones- of prostitution, kidnapping, extortion, drugs, mafia, but of course these were just whispers that made the rounds with no recorded proof to sustain anybody’s claim. There were reports of one or two such crimes where the perpetrators were the transsexuals, but nothing much to substantiate a supposedly huge nexus. Yes, but people were wary of them

And then I met Sudama.

I expected a barrage of curses and cuss words when I refused her money the first time, but she didn’t. “Bhagawan bhala kare . Sukhi rakhe” was all she said. The second time I refused, she had said, “Koi nahin behen. Jab ho tab dena”. And she had my attention after that. I mostly used to give her the spare change when I used to meet her after that in return for some well meaning good wishes.

When one day I just felt, I had to sneak a peek in to their world, their closely guarded world. She was ready to talk but talking without attracting attention was difficult.

We were both from different worlds and perhaps never the twain shall meet, but for the moment we did meet.

She told me about the classes of eunuchs. The Hijras , Hijris and the mongas. Being from a medical field I tried to correlate with her descriptions. Though Hijras and Hijris were self explanatory but who were mongas?

“They have the goods but they stop functioning.”

Reason? Did they stop functioning or were they operated upon? She avoided my question and again stressed on what mongas were.

Where did they stay?

“We have our colonies.” She didn’t specify the location. I was an outsider. It was not for me to know. But it is common knowledge that mostly they reside in the slums and the sleazy underbelly of the city.

She had come of her own accord to the colonies like most of them, which were headed by a senior member or ‘gurus’ as they used to call them. Their physical conditions and the sexual orientation leave them not much choice but to leave the society and their ties behind and find company with people who are like ‘them’. People are not kind towards a differently oriented or a differently-abled person in the society. Either they are shunned or they are ridiculed.  At least the differently-abled have government sponsorships and aids. In India such reforms and transgender friendly laws are yet to be formulated.

With almost nil job opportunities and high amount of school dropouts they are left with no other alternatives or worse ones. And so they resort to begging at traffic points in their marked areas.

“I have no ties with my blood relations… They are my family now,” her expression masked.

What about toli badhais or the song and dance performances at birth and marriages?

“It’s not for us. Only the ‘upper crust’ of the colony goes to them.”

Upper crust! I was surprised while she explained – “Yes we have our caste systems too just like in your society. And the jobs are assigned as per their castes. A Brahmin will handle the rituals and prayers …So I do not go to the toil badhais. I am here till the beat policeman comes at ten am and then we leave…some days I get to sing bhajans after my work here…”

While most of the Hijras used to earn a living by begging and toil badhais, it was said there were many who resorted to prostitution.

“Yes, there are a few who do not come to beg with us. They stay back to serve clients… but as it is, sexual activity is rampant in the colonies,” she added with an embarrassed chuckle. “Every member of the community resorts to it willfully. The desire is always there… some do it frequently, some not. But every member indulges in it.”  It was a candid confession which had devastating implications. Though the numbers were not circulated officially, the Hijra population was still strong and was under the ever growing threat of HIV and other STDs.

Almost cut of communicatively from the mainstream population, they have very little access to health facilities, education and other civic amenities. Though a few NGOs were trying to reach out to them in their society for education, health education and rehabilitation into the mainstream, the results were yet to show. However some of the states like Andhra and Tamil Nadu were showing signs of progress in that area with political as well as legislative representation of the eunuchs.

“We have our own schools, treasury system and vaids. The government does nothing for us but we are self sufficient… Hijras are a rich lot behen. Do not worry about us. Hijras and beggars never die poor. So we are happy and a satisfied lot.”

Unlike a misconception I had about their registration and enrolment in the society’s records, she said they were never a problem. She busted the myth into pieces with a laugh. “Records and papers are not at all a problem. Sab bann jaata hain. Everything is in proper order… However we keep a safe distance from the law enforcers. The action is mutual… We are God’s special devotees and we would love to be left at peace to ourselves in our world… If you can spare a little for us well and good. If you can’t, then some other day! You will always have my blessings in any case”

What about your curses, I asked

“The curses cannot harm you. Charity is something that should be done out of one’s own accord. One should not be forced for it. No one can curse you for that behen. The curse will bounce back!” she assured.

Did her guru teach her that?

“I am a devotee of Sant Nirankari. I attend his sermons and assemblies …but yeah my guru also says so.

They did go out in public gatherings, mingled, shopped, pampered themselves at beauty parlors and watch a movie at times but they tried their best to keep out of our way. Attempt at discretion wasn’t however an easy thing. And they do attract quite a lot of stares and jeers where ever they went.

A myth that went around was that Hijras had a strange way of cremating their dead. They curse, abuse, kick and cuss the mortal remains before being cremated, so as to will the soul never to return in that form. I decided to check that out even if it was a sensitive matter.

“No one from your respectable society will touch us behen. We perform our rites and rituals ourselves with due respects and deep mourning. It’s fate and circle of life and rebirth. Everybody has to go through them. Doesn’t help much to lament or curse the fate, is it? “

It was a parallel universe from ours but was she in a bubble of denial? Or was that bubble for my benefit? What would I have said about my world if I had to describe it to her? Probably I would have told her about my child, my job, workplace where I share a cup of coffee with my colleagues over easy banter. Would I tell her about the cut throat competition at work, office politics, relationship issues, the ugly fights over parking space? Probably not!

There are always two sides of a coin. Two phases of 24 hours-Night and day! A good and a bad side to everything. Both our worlds too followed the same principle. The question was how did two worlds come into being? The problem was not in the incorporation due to legislation or administration or building a set of similar rules and laws for their world. The incorporation was a problem because we did not have a place for them in our minds.

It was not about building a safe and secure world for them, another planet It was about the fact that they had to leave our world for no moral fault of theirs.

It was time for her to leave. I asked her if I could take a snap of hers. She smiled “Only for your memory. Please do not publish it any paper.” I felt guilty, because that was exactly what I had in my mind.

I decided to put forward a step towards the great divide. “Let’s click our snap together. For memories sake,” I said.

Photo Ref: Lakshmi Narayan Tripathi – A social worker and one of the best known transgenders in India. She has managed to come out and creative awareness and also generate employment opportunities for people like her. This picture is from Dus Ka Dum, after which Salman Khan promised help to her.  She has nothing to do with this piece except that she is one of the people fighting for the cause of the transexuals.

When the odds meet