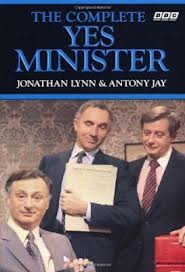 I sat laughing hard (in the process irritating my dad, who sat watching the local news channel) reading the book I held,

when a TV footage showing some people protesting against a government venture came up. That, doubtlessly, made me chuckle harder than ever, inviting a glare from my father that said to me clearly that I should be off. The piece of literature I sat reading (and contemplating) was not a book of jokes, not a Shakespearean comedy, not even my 9 year old brother’s latest story “The Flying Dinosaur” (for which I had suggested the title Archaeopteryx lithographica, but unfortunately for me, he translated it as ‘bullshit’).

The Complete Yes Minister (by Jonathan Lynn and Anthony Jay) is, in very plain words, a book to remember. Written in the form of a British Cabinet minister’s journal and complemented by memos exchanged between administrative officials, the book has been inspired by the sitcom Yes Minister that became quite a rage in the whole of Britain in the 1980s. What makes this book appealing even after two decades that have ushered in an era that seems to share no similarities with the times in which the sitcom was telecast? To this, I would answer that the book, in essence, is a satire on the people in power; it contains the very basic imagery of government departments which still remains immune to decay by time and people. It is very British, in humour as well as in its candid revelations.

On that particular day, I had just finished reading the chapter ‘The Right to Know’. The Right Honourable James Hacker MP, Minister for Administrative Affairsis in an inadvertent dilemma when he decides to take up a scheme for developing the countryside, and as expected, meets with protests. The nature of the problem is sensitive: a place is on the verge of losing its protected status, known for the badgers dwelling in it. It is Sir Humphrey Appleby, the Permanent Secretary of the Department of Administrative Affairs (DAA) who tackles the situation for him (and as he says, there are some things that it is better for a minister not to know).

The humour is raw and relatable: no out of the way jokes, just plain truths that have always stared at us in the face. A particularly good one is the definition of committees given by Hacker. “You know what committees are. Always squabbling and procrastinating and wasting everyone’s time”. Yet another one is when Hacker is reminded that even men, being a part of nature, are animals: “Obviously I knew that already. I’d just come from the House of Commons.” Hacker makes interesting observations that “every paper has to pander to its particular reader” and “…she said in her most scathing tones, the voice that teenage girls specially reserve for when they speak to their fathers”.  Perhaps this was the part I liked best, when Hacker examines the information supplied to him by his department about the upcoming project: “Either they give you so little information that you don’t know the facts, or so much information that you can’t find them.”

What makes this book particularly likeable is the entertainment that educates. It is hilarious in essence but contains deep wisdom embedded within. In today’s context even, the observations hold true: most ministers are seen to evade questions; rarely do they have a very good idea of the state of affairs. Furthermore, the role of social media has been emphasised- though technology was not that developed then- newspapers have been critically mentioned of, and their role in moulding public opinion. In yet another chapter (“The Greasy Pole”) the editors make an interesting suggestion that I would like to reproduce here:

“There are times in a politician’s life when he is obliged to take the wrong decision. Wrong economically, wrong industrially, wrong by any standards- except one. It is a curious fact that something which is wrong from every point of view can be right politically. And something which is right politically does not simply mean that it’s the way to get the votes- which it is- but also, if the policy gets the votes, then it can be argued that the policy is what the people want. And, in a democracy, how can a thing be wrong if it is what the people will vote for?”

This certainly got me pondering, and so did numerous other such observations.

In all, the book is entertaining and makes for an absorbing read. To make a huge understatement, I’d say that The Complete Yes Minister is a treat for the mind to feast on.

The Importance of Villains