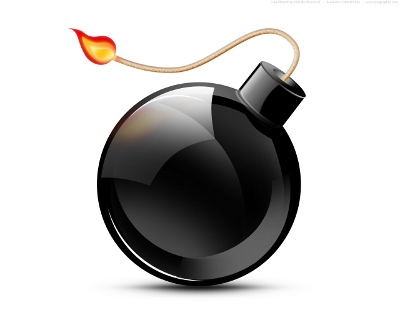 Fried Eye says- After those serious issues that we covered, we need a small break and what better that some light moments brought to us by our guest, Siddhesh Kabe who is a humorist and blogs in www.sidoscope.co.in in this futuristic fiction which brings a new meaning to the word “Saving for a Rainy Day.”

Can a bomb come under the purview of the phrase – saving for a rainy day? Read on to know more They sat there eating dinner in an awkward silence. As the forks and the spoon clanged on the glass plates, they both realized there was not a single topic in the world they would like to discuss.

Outside the glass window,70 feet above the ground floating over the atmosphere were alien ships. They had declared war on planet earth two days ago- Every radio, transistor and television had picked up the message.

Lawyers from all over the world tried to identify some clause about alien invasion in the Geneva Convention but sadly there was none. Because most laws and constitution were written in olden days when an alien’s existence was debated, hence the alien attack did not come under any law or constitution for that matter. Since there was no legal boundary where planet earth ended, everyone assumed the aliens had invaded the earth just as they crossed the ozone layer. With no help from the legal point of view, the world was at its wits end on what to do with the aliens.

He sat there as diligent as ever. It was a pity that he was here chasing a mirage, hoping that this would possibly be the one solution to save the earth, if this failed, well… he had no plan B. No one had any plan B.

It took him forty years to identify this place and another ten years to sit on the table. In front of him was professor… well… The Professor. (The professor-five years ago-it had been proved that the degree held by the professor was a fake.)

‘So,’ he finally said breaking the awkward silence.

‘Enjoying the steak?’ the professor smiled, showing his blackened teeth.

‘Yes, it is really good. Where did you learn to cook like this?’ he asked.

‘When you live all by yourself for 80 years, you do cultivate culinary skills,’ he smiled, ‘I also learned a lot from the cooking shows on television.’

“Yes 80 years, I have been planning the destruction of earth for last 80 years,” the professor beamed proudly.

“So… you are in super villain business for last 80 years…” he asked again, “That means you started when you were…”

“Just 10,” the professor smiled, “I was 10 years old when I determined I will be destroying this planet.”

“To be frank,” the professor tried to recollect, “I don’t remember but I think it had something to do with a puppy or an ice cream or maybe both.”

“Yes, I think a puppy stole my ice cream…”

“So you decided you will destroy the planet…?” he asked, “…that’s horrible! Couldn’t you just order a new ice cream?”

The professor considered the thought for a moment, “You are right. That never occurred to me., Know any place where I can get special flavored ice cream?”

“What flavor do you want?” he inquired.

“Shit flavored…” the professor said, “…You know the brown color…”

“Oh I am sorry, did I put you out of appetite? My apologies! … you see, that was a s…” the professor paused, “Let’s say special flavored ice cream. It was one of its kind and I think that was the last piece.”

“Oh… wonder who makes ice cream like that…” he said.

“My dad.” The professor answered abruptly.

‘Yes, it was his old factory, my father’s. He made real special ice cream to fool your friends. See, it was his genius- it used to be some stupid flavored ice cream and it would look just like real normal flavors. Then you see their expressions as they puke over the ice cream…” the professor beamed.

“Yes…ahem… yes it does seem nice,” he quietly bit in to the salad.

“Yes, but you know the government, they mess with everything. I gave a rat flavored ice cream to my puppy who died of viral infection. One small incident and the government shuts down the whole factory, can you imagine?” the professor said.

“They are just like mom. My mom, I mean. I was feeding the blood flavored ice cream to my friends and she stopped me, IMAGINE!! Dessert ?”

“That’s a normal flavored ice cream I hope,” he asked looking at the magenta colored cream over the chocolate sauce.

“I call it, the bleeding woman…” professor smiled, “My favorite.”

The conversation was going to epic proportions of awkwardness.

He cut in between.

“I am curious…,” he said, “finally coming back to the main topic. You send me a text message that you had a means of fighting this aliens and saving this world. Why?”

The professor looked at him and smiled again, “I have installed the SMS pack on my phone, 1500 SMS per day, only local. It is beautiful; I keep on texting random people every day picking number from the telephone directory. It gives me a purpose in life.”

“No n!… I meant… oh wait, you have a telephone directory of mobile phones?” he asked curiously.

“Yes, genius isn’t it? I went into malls in disguise and offered free samples of my ice cream posing as a salesman for the telephone numbers. It took me ten years, but I have most of the numbers on the planet. I have cross referenced the table with name, addresses and all.”

He was jolted back to reality, “No no! that’s not what I meant when I asked why. Ok, I meant why you would like to save the planet? I mean your entire life you plotted on destroying it. It took you 80 years to build this machine, isn’t it?”

“Oh that…,” the professor mood dropped, “You know I am a super villain…”

“The primary role of the villain… nay, a super villain is territory. Planet earth is my territory and these creatures…” he pointed to the ships hovering above them in air, “… they threaten my existence by destroying the world before I do. If there is anyone, anyone at all who is going to destroy the planet it would be ME,” he rose up as he spoke, then coughed and sat down, “Sorry for that, I do get carried away.”

“They beat you in destroying the world before you. Sad no?”

“Yeah, I don’t believe in karma, but I think it has finally caught on. I planned to destroy the planet on this Friday,” the professor said, “But given the circumstances my machine can be fueled to destroy only those invaders.”

“I love Friday, it’s the day when you fry the planet, sounds a ring to it? And the earth was fried on a Friday…” professor beamed.

“Oh… so you mean this Friday?”

“Yes, it was my birthday this Friday.” The professor beamed, “Will you send me a card?”

“Get me one of those aliens will you? No need to pack, will try a new steak.” The professor beamed, “So here are the keys to the machine.”

“It will work only once?” he asked.

“Yup, only once, actually it was build to destroy the world, there was no need for a dry run on it, was there? And the core is fueled by Anti matter, the amount which is inside, it took me 20 years to collect it from collisions,” the professor smiled, “It was fueled for one time use only… which we will be using to destroy those aliens.”

“I have found a purpose in my life,” the professor smiled, “I got 13 lakh more numbers to send SMS too. I have developed this super computer, which gives me information about the person I want to send SMS about his personal life, aspiration, job profiles and all that. It then generates me classic abuses and messages to text, most of them respond back.”

“Oh… where do you collect the information from?” he asked finishing his dinner and wiping hands on the towel.

“Facebook of course,” the professor said, in a matter of fact way.

“Let me give you the instruction manual, it’s as simple as riding a bicycle… only emits radiation as it moves.”

They both walked outside in the open as two buddies. The aliens never stood a chance.

The Flood Menace in Assam: A Review