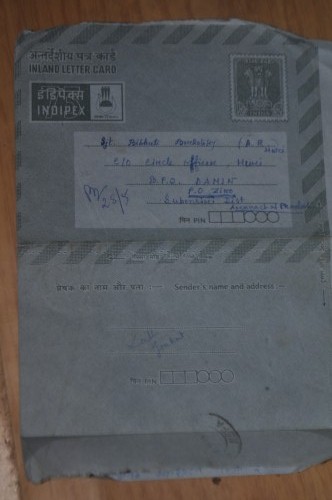 I’m posting an inland letter sent to my Dad from Jorhat when he was in Ziro. The letter was sent to him on 26/4/1970 and it reached him on 28/5/1970. It took 1 month since Ziro was a remote place and it needed 10 days from Jorhat to Ziro including 7 days of walking.

I saw the blue inland letter in her hand

Love from home, I thought with a smile

The other day I was in Post Office, I wondered if they still have those blue inland letters. It has been a long time since I came across one. I know that Post Cards still exist as I have come across it and received a few with non important messages. I remember while I was still a kid, Deuta used to write letters to Aita (his Ma) and got replies in Inland Letters. At that time, Inland Letters were considered classy and only poor men and misers used to write letters in Post Cards. I was not allowed to write letters in Inland letters as I would waste most of the space. It was a standard thing that I don’t have much to say, and therefore my letters would be short and hence I should use Post Cards. We can come back to that later on in some other post. Envelopes were considered expensive as they cost double the price to convey the same message. Envelopes were used only when you have to say things more than an inland letter could say and it generally meant that the issue is serious and a matter of grave concern.

I remember one of my uncles who used to use every inch of the letter. The one we used to call a ‘Paisa Vasool Chitthi’ (Value for Money Letter). Ma used to say that people of his (my uncle’s) age write letters like that and it was a school of thought that said we should not waste any amount of resource.

I remember the Kong (Elder Sister in Khasi), who used to come every day with loads of those inland letters and now I hardly see the postman with an inland letter in his hand. Nowadays, most of the letters that are posted in the red letter box are envelopes; most of the others are either couriered or sent through registered or speed post. Inland letters are lost somewhere, amidst the memory of time, when there was no internet.

P.S. – If I wrote this in an inland letter, I would have used hardly 2 pages. 1 page would have been completely wasted. A big crime, a guilt that will always stay in my mind forever.

Inland letter- as the author says is a relic of the past in a way. In those times when people had no cyberspace to scribble their notes, they had instead sent those lovely blue notes to be their voice to distant places. And so it had build many relationships, strengthened bonds, or in a tragic twist had maybe bore sad tidings of an end. E mails, social network have made life easier, but the joy of a letter after many days of waiting, from your beloved will always remain priceless.

A little bit of statistics for you –

2 Annas inland air letter was the first postal stationery of Independent India. It was issued in 15th September 1948 from a few selected post offices

You can use the private inland letters provided it satisfies the specifications.

Inland letter is priced at Rs 2.50 now and is still available.

Relatively yours – A realty check
You ask C replies.