Surovi Sishu Panchayat – Being the change 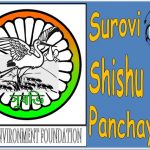 Everybody talks about change; about bringing about a change in the society they live in, the necessity of change as well as endless suggestions and ideas- that could change your life- to change everything around them, everything but themselves. However, how many people do we see actually making that effort to bring about some changes in the environment they live in? Mostly, we only see people complaining about the ‘system’ and always holding someone else responsible for making things right. Rarely do we find people like Rihan Ali and his platoon of youngsters- the Surovi Sishu Panchayat of Guwahati, Assam who take it upon themselves to literally ‘be the change they want to see’.

It was in 2007 while volunteering in a project organized by UNICEF, Assam, Rihan came  across an eight year old girl child in a destitute home at Jalukbari, Guwahati, who was  allegedly brought illegally, without a Visa from Bangladesh by her own parents, who fled  the scene when they were caught, leaving their young daughter’s fate in the hands of the  Assam Police, who handed her over to the destitute home. She never understood why she  was separated from her family; neither did she understand why she was made to live  among unknown people in an unknown place. Her parents never returned. Her story struck  a chord in Rihan’s heart and he pledged to work for children like her, who were exploited  and forced to spend a desolate childhood. He realized that children too, like everybody  else, had rights, which they were not even aware of.

In 2009, in association with Gandhi Smriti and Darshan Samiti in Guwahati, Rihan organized a summer camp for school children, in which many students were given training in personality development and other basic skills. Most of these children were from marginalized backgrounds. During the same time Gandhi Smriti and Darshan Samiti had also started a few children’s panchayats in Tinsukia and Dibrugarh, in association with Kasturba Gandhi Memorial Trust, Assam Branch. Following suit, and with guidance and help from the same, Rihan started Surovi Sishu Panchayat by bringing together a few of the young people he met at the summer camp.

On 8th July, 2009, Surovi was formally launched. However, they had to start, with practically no funds. With whatever little Rihan could manage on his own, they began to conduct small awareness programmes, took care of drop-out students and taught them in the space outside the schools. Besides child issues, they also tried to raise awareness and generate action on several societal and environmental issues like the cleanliness of public places and tourist spots.

However, finding no response from the respective authorities and committees responsible for  accomplishing such tasks, Rihan along with his squad of Surovi Sishu Panchayat, decided to step  onto the field themselves. They started taking out cleaning sprees in these locations, on their own.  These continued for two months continuously. From streets to parks to tourist spots and other  public places, they started moving from place to place, giving ‘makeovers’ to these places as well  as attracting the attention of the public, some of whom started to step forward in their support.

In a Shiva temple at Panikhaiti, Tamulbari, a very disgusting thing was seen happening. People, who seemed to have lost all kinds of civic sense, were seen to use the temple compound as toilets and relieve themselves when nature called. Without caring a pinch about the religious issues or anything else for that matter, Rihan and the kids started to clean the temple compound every day. Gradually, people stopped messing up the place and the authorities too came forward to help in the preservation of the place. Soon, Surovi also got permission to develop the compound of the temple as a park, which is now known as the ‘Surovi Park’. 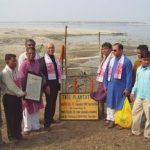 Surovi is not simply about bringing about changes in the society, but an important aspect of it is the huge change that has been seen to be brought in the lives of the children of Surovi Sishu Panchayat ever since they have joined the panchayat. From being passive participants in the society, these children have been able to come up to the forefront, develop confidence and an identity of their own, and making a mark which promises them of a bright future.

“I have been associated with Surovi since 2010. It has given me the opportunity to explore my talents and shortcomings. The qualities of leadership which I have learnt through Surovi’s programmes have enabled me to become an important part of my village. The people come to me and seek my help when they are in trouble or when any disputes occur in my village. Surovi has given me a new identity and I am very thankful to our volunteer sir Rihan for letting me to be the member.” says Islam, a student of Class XII.  “Last week I helped a pregnant woman while she delivered her child in the hospital as neither her husband nor any of their family members knew how to deal with the legal proceedings of the hospital. I even donated my blood as some complications had taken place. It feels great to be the reason of other’s happiness.” he continues.

Priyanka Chettry, another young member of Surovi, also has similar experiences to share. She says, “I was a shy, unconfident, passive school girl. But after my association with Surovi I am not the same girl. I am confident enough to address a gathering and I can actively participate with the matters concerning my locality. Surovi has given me the platform to explore my talents. It has helped me to be an extrovert and most importantly it has helped me to understand the real motto of my life. I’ve learned here to balance my social life along with my studies. In my XIIth board exam I was able to secure distinction marks. It was quite surprising for everyone because I was a mediocre student and when they asked me that how I managed all that I proudly replied that undoubtedly the hard work was mine but my source of inspiration was Surovi. Surovi has not only helped me to be socially active but it has also given me an opportunity to explore my other side.”

A major turning point for Surovi came when UNICEF came forward with a Media Literacy  Programme for young children, in which the children from Surovi participated. Under the guidance of  UNICEF volunteers, they came up with their first publication- ‘Mukta Akash’, a news journal, which  was completely participatory as a medium for the children, of the children and by the children.

Soon, they were noticed by the members of The Peace Gong, which is an initiative of the Gurudev  Rabindranath Tagore Foundation, New Delhi. The Peace Gong is a global children’s newspaper  aimed at giving young children a platform to write and develop understanding of issues of social concern, thus encouraging and preparing them to contribute towards a culture of peace and nonviolence through media literacy. The members of Surovi also became the first bureau of Peace Gong in Assam. It was through Peace Gong that Surovi gained more publicity and popularity, which meant more funds and support started flowing in. Today, Surovi has about 200 young children as its members.

“If we have to deepen our democracy in today’s context, it would imply a redefinition of governance. We have to make our young people understand that today governance is not simply what governments’ do or want to do. Young people must be able to critically understand that governance is about the process and systems of decision making, which mobilize and utilize public resources for common public good.” Says Prof T K Thomas, Chairperson of the Gurudev Rabindranath Tagore Foundation, New Delhi which promotes Shishu Panchayats in different parts of the country. “They need to be alert on the significance of openness and transparency of the process and systems of decision making and should be accountable to the citizenry. They should also be able to contribute to critical public discourses. Through the Shishu Panchayats, children learn to take a collective decision on what requires to be done in their community and contribute to democratic governance. One important areas of work of Surovi is wildlife and environmental conservation. To take forward the process of sustainable development, we need to encourage this effort of Surovi so that children and youth take the leadership in biodiversity and wildlife conservation and ensure a harmonious relationship between nature, human and wildlife.” He adds. 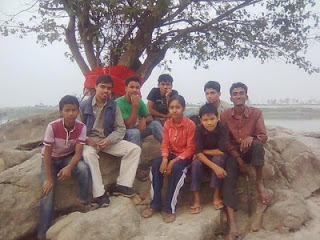 While Surovi Shishu Panchayat has been taking up different causes including education, health, sanitation, gender equality and personality development, it has been seen that nature and wildlife conservation have also emerged as significant intervention areas. One noteworthy initiative in this regard is the awareness development programmes held in tribal villages. Such a field study was also conducted in Shyampathar, a tribal village in Amchang Wildlife Sanctuary, where they surveyed the living conditions of the people, which are heavily affected by the constantly degrading environment. Here, Surovi tried to raise awareness among the people about sustainable development and measures of environmental protection. In their opinion, with the steady growth of population, sensitizing and ensuring community participation is the key to maintaining the harmonious relationship between human and wildlife.

With their motto as “Children for peace, youth for peace and people for peace”, Surovi has the spirit and the potential to go a long way. Indeed, what is there that cannot be achieved if you have your heart in it? All one needs is the courage to ‘be the change’ rather than merely wishing for a change.