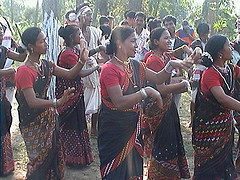 When you think of the spring season, what are the things that spring to your mind? Colours! Flowers! Love! Merry making and festivals! Right?

There are some words or abstract images associated with the spring season which are universal- earth, fertility, romance, festive thoughts- be it the May pole or even the Bihu tolis (or Bihu grounds). No wonder, spring is usually celebrated with much fanfare in most parts of the globe and in many cultures as the New year, where people ready themselves for the next sowing season. The insinuation to fertility and seeding is palpable in most of the rituals of the spring festivities.

Even North East of India has an amazing array of celebrations and rituals for this time of the season. After much efforts and promotion, people all over the world have become aware of the Rongali bihu as the mainstay spring time festival of Assam, but are the people aware of Chapcharkut from Mizoram, The Garia puja of the Tripuris, Myoko or Mloko festival of the Apatanis, Moaste and Tsichye from Nagaland, Cheiraoba and Lai Haroba from Manipur? And there are so many more if we consider the sub tribes of the hills too in the same breath.

Springtime, the beginning of the sowing season has an amazing effect on man as the landscape changes from the dull grey to the fresh green and  symbolizes new beginnings, hopes , newer dreams and urges and is considered the best time for festivities which are marked by rejoicing and merry making.

Some tribes start early to welcome the spring season, as in the Apatanis who hold a Morom festival in the month of February, in preparation of the season.

The Tripuris worship their deity Garia after seven days of springtime revelry.

The Mizos celebrate Chapcharkut with three –four days of merriment.

The Mloko or Myoko festival is marked by animal sacrifice for the Gods in a flower garden, followed by community feasts and rejoicing.

The Moaste and the Tsichye are the spring festivals of the Aos and the Rengmas of Nagaland.

The Konyaks of Nagaland too celebrate the season with dancing and singing.

Even the Bihu from Assam if scrutinized minutely, will be seen incorporating in its rituals, diverse traits of Austric , Mongoloid and Aryan origins.

Many of the hill tribes of Assam observe their unique version of their own spring festival. Ali –ai-Ligang of the Mishings, Bahgiye vishu of the Deuri , Boisakhu of the Rabhas.

In fact, many of the features of the ceremony and celebrations are common among the various tribes, as in – ceremonial reception to elders, gifts to friends and relatives, community feasts with money and materials gathered as reward from households by group of singers and dancers, rituals for welfare of cattle and so on.

The spring time festivals are mostly related to the sowing season, as the earth is in its most fertile during spring.

The people see the fertility of the field usually linked to their own amorous and emotional urges, characteristic of the aura of romance in the air and hence the rituals and the song and dance are heavily influenced by sensuousness.

“As a women embraces her lover,so may the earth take the seed of the rice into her womb”

Bihu dance is seen in its most intense form amongst the Mishings. A Mishing romantic number depicting the agony of a deserted lover is so full of drama, that it has been said to bring tears to most of the listeners.

It is the music and love of her beloved that makes an Assamese girl restless during Bihu season which can be seen from the following lines :

“When you blow your pipe yonder

And tune your fingers play

My eyes move for a passing glance

Beyond the precincts of the gateway

The shuttle falls, as my hands quiver,

Though I sit with the loom well nigh” 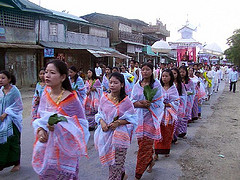 The entire process of creation is enacted during Lai Haroba through the medium of dance, right from the meeting between the God and the Goddess, sowing of human seed in the womb, birth and growth of a child.

The North East of India is a colourful land of colourful people and a colourful life.     Not even poverty, natural disasters and insurgency can bog down the spirit of the people here. Come spring and every year people forget their day to day woes, world issues, national and political matters to rejoice as one common spirit.

Every spring the blue hills and the green valleys come alive with celebrations of life and nature!

One has to be in the land to experience the throbbing, pulsating, jubilant moments of the festivals.

So , the coming spring, where do you intend to be?

The Luxury of Language
Editorial