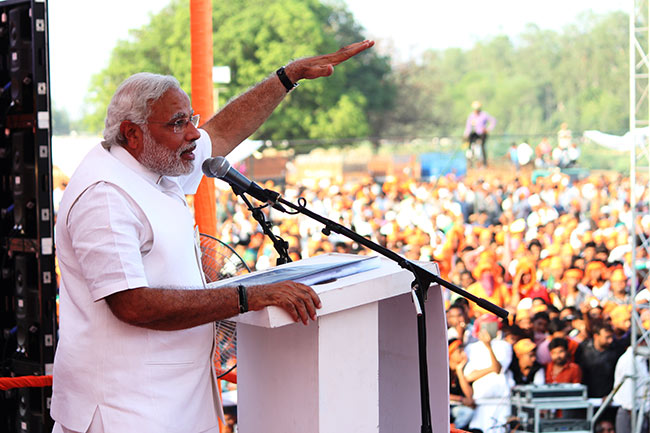 [This is a piece of satire and should be considered as one. The writer is a senior journalist based in Assam.]

Modi government is planning a cultural revolution, we are told. Very soon our school curricula, art and cinema, science and technology and libraries will be ‘cleansed’ of western culture. According to reports culture minister Mahesh Sharma and HRD minister Smriti Irani are going to prepare a road map to look after this matter which is much more important than rising prices (To control the rising prices we need to give some time to the government).

This is going to be a whole new world of opportunities ahead for us. I have too many expectations from this. In tune with other bans the government should also impose bans on everything western to protect our culture. Only bans can protect this civilisation.

It will be inspiring to see our PM (India Pradhan Mantri, not a western Prime Minister) get rid of his BMWs and go for a desi car or no car at all as the modern motor car was invented by an impure westerner. Soon we will have a PM travelling by a bullock cart or a chariot with his entourage travelling on foot. He and other ministers will not go on foreign tours for a while because the western planes will be wiped out and reinventing the Pushpak Rath will take some time. They will also stop carrying fountain pens and ball pens, mobile phones, laptops and everything. The netas and babus will happily give up air conditioners, washing machines, phones, electricity, TV, radio etc. Thus it will save a lot of money for the nation. But most importantly we will be spared of listening to people like Sakhshi Maharaj and Prabin Togadia along with the Owaisis and Azam Khans because there will be no TV. The only concern will be the absence of Baba Ramdev’s Astha Channel. But anyways he can sell noodles along with Ambani. There will be no Mann Ki Baat as there will be no Radio. No more tweets and no more trolling on Social media. All the VIPs and VVIPs will throw their Lal Battis away. After all Lal Batti or the red beacon is a western influence.

It will also change our dressing style, no more shoes, jeans, skirts etc. The RSS guys will have to give up their favourite shorts and shirts. We will also see our soldiers and policemen on horseback yielding swords. However the government will need a Ministry of Women’s Dressing as some women might want to dress up like Urvashi, Menaka or the women depicted on Khajuraho and other ancient temples. They may also start following the ancient Indian fashion of Kanchuli (equivalent to a bustier), or may start adopting the traditional topless culture that was prevalent among women of Kerala till the first part of the last century. We will need a separate ministry to tame such women. The women in the cow belt might start demanding ancient Hindu Swayamvar system or the right to decide who she is going to marry. Therefore the government will have to enact new laws to put a time frame to the definition of Indian or Hindu culture. With the new law the traditions prior to the days of Khap Panchayats will not be regarded Hindu. Also the self styled custodians of Hinduism like the Bajrang Dal and Ram Sena will have to be given exclusive right over Hinduism. I am sure the BJP will get this done by hook or by crook.

For sure we are going back to our glorious past. But the question is which time period of our glorious past will be chosen by the people who we voted to power to end UPAs corruption? Definitely we are not going back to the days when Hinduism meant openness of the mind.  We are definitely not going back to the dark days when Hindu scholars described the Quran as Allopanishad. But we will go back to the glorious days when people like Anandi Gopal, Anandaram Barooah were socially ostracised for crossing the seas. As wiping out English from India is also an RSS agenda so the BPOs will shut down and will be a great relief for millions of youngsters because they will have no workplace to go and hence will be free to devote their time and energy to constructive activities like disrupting film festivals, burning books and beating up or killing people. Soon we will go back to the glorious days when girls were not allowed to go to school but we are definitely not going further back in time to the age of Gargi and other female scholars.

Our libraries will be Indianised so that the young people learnt to respect Hinduism. But the government must make sure that only the ideology of the Sangh and the self styled Sadhus affiliated to the Sangh should represent Hinduism and not the ones who are opposed to it. Hindu organisations like the Akhara Parishad which is opposed to the Sangh ideology should never get a chance to make their arguments known.

We are convinced that to prove Hindus are not weak we need the Hindu version of the Taliban. I am sure the present Indian government is wise enough to be able to out-Taliban the Taliban in no time. By the way the government should ban meat but should not stop members of ABVP, HYCP, Bajrang Dal from drinking and smoking. KIMADHIKAMITI  (meaning: That’s all. Why say more?).