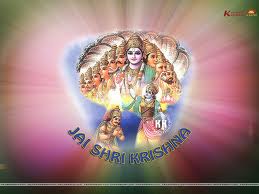 He was sitting by the side of the fire outside his tent, staring at it with unblinking eyes. The last nine days of incessant fighting was slowly taking its toll. Seasoned warrior he was, but he felt his skills to be grossly inadequate for such an intense war. If his friend and guide had not been there for him unfailingly, he would have been long dead, he thought, sending silent gratitude to the high heavens.

“Thinking about me, Parth”, emerged a mellow, reassuring voice from behind.

“How do you always know what I’m thinking Vasu,” came a miffed reply from Parth. His gaze steady, though pensive.  “And what always bewilders me is that why can’t I detect your approach? I can easily pinpoint others’ location even in the dark and pierce them with my arrows” he asked motioning towards his fabled weapons lying beside him. Vasudev sat opposite to him, face to face, his smiling visage clearly visible by the light of the fire.

“I hope you have no such hostile intentions for me. Think about my wives, what will happen to them, and the ones that I haven’t married”, Vasudev joked.

An involuntary smile escaped Parth’s tense lips. “I wouldn’t waste my arrows on you; A tip to Balaram is enough, he will do the rest”.

“But you still haven’t answered my question?” Parth said looking up to one of the most enchanting faces of Aryavarta. No wonder womenfolk fell for him at the drop a peacock’s feather, he thought without removing his gaze. The fire cast shadows in different angles at his perfect facial curvatures making him more enchanting.

“Always the perpetual archer, never for a moment keeping your mind away from the target”, remarked Vasudev, the enigmatic smile never leaving those perfect lips even for a second. “And my ability to catch unaware an archer who can find his target even in the dark is because of what I am. And by now you know what or exactly who I am” he added, “But why are you not at the council? Your brothers were anxious. I came to look for you. I thought I would find you here, your usual retreat at the time of inner turmoil”.

Parth was tired not physically but emotionally. He was impervious like any other kshatriya to displeasures of the flesh, but the mind was always a bother, although that was not the primary reason behind his not attending the discussions. The prior deliberations for the next day’s war always assigned only one task for him – Engage and obliterate Pitamah. “What is the point of my joining this pre battle counseling sessions? Whereas others are at liberty to choose their opponents I’m stuck with one entity. His arrays of weapons are as exquisite as his skills. Any strategy I’ve employed against him has been repelled with equal ferocity” he blurted out.

“You are the only one in this camp who can duel with him in his assorted weaponry. And your last nine days’ display, pitted against him, should give you satisfaction. He is not going to kill any one of you five brothers. The other four can hardly resist him. Imagine others fighting him- Dhristadumnya, Satyaki, Abhimanyu, he would dispatch them to the other world in just a few seconds. You are protecting your army from annihilation in his hands,” Vasudev gave a considerate smiled.

” Don’t flash me your soothing smile. I had barely overcome the guilt for fighting my mentor and now…..” Parth looked away in the darkness of the forest bordering Kurukshetra.

“And now I’m unable to finish him and get over it. Fighting him is a torment for me. The sooner he is out of the equation the better it is” Parth finished, referring to the personal demons gnawing his soul. He was always Bhisma pitamaha’s favorite. And now to fight him, was a sort of denial of the unconditioned love he had, for the father figure, who had showered upon him generously from his reservoir of affection.

“Fighting grandsire is not denying your affection and respect for him. His allegiance to the Hastinapur throne compels him to take Kaurava’s side whereas you are fighting for your rights. Prakriti ordains that one fights for his rightful due when not delivered to him or her. You are just following this basic tenet of nature”, Vasudev tried to clear his friends conscience; “Outside the battlefield he remains the old grandsire who took you up in his arms when you were a kid. But in the war he is just another adversary, and a formidable one at that. If something happens to him in your hands, you shall not be blamed in any way.”

“There are no ifs or buts in a war. You leave them yojans behind when you leave your first arrow. You either win or lose. Kill or get killed. Grandsire’s allegiance lies towards the wrong side instead of the wronged side. Anything happening to him would be because of it.” Vasudev finished.

Neither Parth nor Vasudev spoke, cherishing the lull before the next day’s rigor. The only sound was of the fire that crackled as some night bird’s doleful monotone reached his ears. The night deepened and the air became chilly. Parth added some more logs to the dying flame. The position of the stars indicated it to be mid night. His friend had entered the Yognidra, the semi-trance sleep in the customary cross-legged position. In this transcendent state, he could sense everything he wants to know in the three worlds. Having nothing better to do Parth contemplated on having some sleep.

He called up one of the guards standing near his tent. The sentry jerked up in attention. He went near Parth, standing in attention in front of him waited for a command, “Aagya maharathi.”

“Bring me my mattress here. I would be sleeping here tonight.” Parth commanded him. The guard brought out the mattress from the tent and laid it near the fire. Bowing his head, he went back to take his watch. Adding some more dried logs in the fire so that it would not die quickly he laid in the mattress under the canopy of the night sky. He tried to forget his troubles looking at the star dotted sky above hoping that sleep would soothe him in her lap. But she had become a sly mistress, playing hide and seek with him. Insomnia was making it impossible to not to think about his task. “Will I be able to overcome grandsire,” He wondered aloud.

“No” a cold voice said. Parth was alarmed to hear it from his friend.  His eyes were open focused at some distant point in the dark forest. “You are just enough match for him. A sishya of Parshuram in warfare, Ganga-Putra blocked his mother’s flow with his mere arrows. Not even his Guru could defeat him, acknowledging him to be an equal. And if that is not enough, he has been granted a boon from his father Shantanu of Itccha- Mriytu, of chosen death”. Vasudev’s voice was hard as granite.

“Is there no way to overcome him?” Parth asked, concerned.

“There is, he doesn’t take up arms anybody other than a man. If we put someone of that credential in our chariot you will have a clear shot at him.” Vasudev spoke like a death god pronouncing a doom.

“But this is Outrageous Vasudev! Not to mention that there is no woman warrior fighting for us, this very notion is an outright violation of the code of war. How can you suggest assaulting an unarmed warrior! That too Pitamah! It would be a disgraceful act of cowardice”. Parth was agitated. No longer lying, he was sitting, looking defiantly at Vasudev.

“Codes, disgrace, where were these words, when you were cheated in the Pasa game by Duryodhana and Shakuni? Where were these when your wife was dragged publicly to the Hastinapur court when she was menstruating? Guru Drona, Kripacharya along with Pitamaha,- were mute spectators. They did nothing to stop the injustice. Look back, Parth.”

Parth recalled the numerous atrocities done on them by the Hastinapur court, his mind slowly filling with rage.

“And you will be relieved to know that we have got someone who exactly fits that description, your wife’s eunuch brother, Shikhandi.” Wonder dawned in Parth’s mind. How could he miss Shikhandi? Of course, he was a eunuch.

But Parth still could not get used that idea, “It, doesn’t seem right Vasudev.”

“This is a war. Here you have to do lot of things which doesn’t seem right. Hard, cold and occasionally ugly decisions are to be taken to win it. Grandsire is the bedrock upon which the Kaurava army stands. Take it away and they fall.”

Vasudev’s arguments seemed logical. And yes, they had to win this war. Kaurava’s had to be exterminated. Pandava’s had to win back their due which was snatched from them. And for that if he had to sacrifice both his ethics and affection, so be it.

“I believe there is no other way”, Parth closed his eyes with resignation.

He needed some serious sleep now. He sensed that the next day was going to be an extracting one. As the fire began to die Parth spoke aloud “I’m going to get some sleep.SubhratriVasudev.”

The night birds monotone became pronounced as the night entered the darkest pre-dawn phase, as the fire began to die.

Fried Eye Says- Hope you enjoyed this creative offering from our guest writer Bhrigu Talukdar on the occasion of Janmashtami which falls on the 22nd of August. Thanks!

Khaadi – A fashionable lifestyle by Shristi and Ratika Saxena

A student in the deptt. of Mass Communication and Journalism... and a fanatic quizzer...