The romance that gave you goosebumps

Love is in the air. Okay, we can overlook the love lost between Shah Rukh Khan and Shiv Sena because this is supposed to be the Valentine’s week after all. And I am sure it would be terrible to not celebrate it in style… and with movies. Movies have always been a great way to celebrate. No secrets that movies are for the love birds when it comes to spending some time with each other. Sitting cozy by each other, one hand into popcorn and the other in the partner’s hand and a lovely movie taking us into a world we would fancy…
And even though My Name is Khan could possibly be your choice of movie for the week for its lovely message or for the love story, we dug into the history of Hindi cinema to find some movies which we believe are some of the best told love stories in the industry – movies we are sure could leave you feverishly wanting to fall in love all over again and to be one of those characters. Read and hopefully you lay your hands on some of the DVDs and watch them till we come up with our next issue. That one solves two purposes – first you are entertained, second think about us (We love the second reason better).
So here we go… and kindly note that this isn’t a certified list of best movies, nor is it in any particular order.

There are films and there are legends. Kagaaz Ke Phool is one film that is more than a legend. Many would rate it as one of the best movies made in India. In its time (1959), however, not many thought so. But then when it was re-released in 1984 in France and Japan, it attained a cult status. A tragedy, Kagaaz Ke Phool was said to be semi-autobiographical and strangely stands as the start of downfall in Guru Dutt’s career. There are many other trivia associated with this Guru Dutt and Waheeda Rehman starrer, but nothing is as compelling as the movie itself.

Now this is one movie we don’t even need to de-abbreviate. Dilwale Dulhaniya Le Jayenge, better known as DDLJ, is easily one film that is almost on everyone’s list of favourites. No wonder the film has gone on to become the longest running film in India and the second longest running film in the world. It recently completed 15 years of screening at the Maratha Mandir theatre in Mumbai. And even today the film draws audience. The film made Shah Rukh and Kajol superstars, made Aditya Chopra a huge name and gave a new trend to the way love stories were after the obscure 80s!

Though it was not the first movie that dealt with extramarital relationships, the way it was done was nothing but remarkable. The film didn’t do too well at the box office, but still remains fresh collective memory. It also happens to be the last movie where Amitabh Bachchan and Rekha acted together. Interestingly, like their characters in the film, an extramarital relationship between Rekha and Big B was also the talk of the town back then. The relationship unlike the one in the film was of course never confirmed, nor did it reach any conclusion.

Mughal-e-Azam was the most expensive movie of its time. And it was also the first time Hindi cinema went colour, though it was just for one song. Extravagant and elaborate sets, and mind blowing dialogues – Mughal-e-Azam went to make history in the box office. It was the story of prince Salim and his lady love Anarkali from the Mughal era. The two characters were played by Dilip Kumar and Madhubala. Mughal-e-Azam gave us the immortal song, pyaar kiya toh darna kya.

A book by RK Narayan, Guide inspired Dev Anand so much that he decided to make it into a movie that would be his entry into Hollywood. As a producer, Dev Anand made two versions of the film – in English and Hindi. While the English flopped, the Hindi version made history and Dev Anand an even bigger star. Guide happens to be a love story involving a married woman and tourist guide and how life takes them on a ride of fame to dust! This one is remembered as one of Dev Anand’s finest performances. 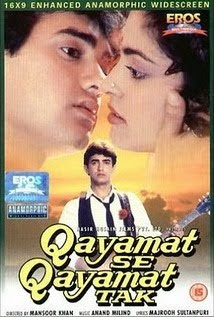 Though this is not Aamir Khan’s first film like always believed, but then this was his first as a hero. And he made sure he made everyone laugh and then cry with this film. Aamir Khan and Juhi Chawla leave their warring families behind to live a life alone, in a world they create for themselves. With loads of ‘aww’ moments this one is often rated by many as one of the best Valentine day watches.

Devdas is one book that has inspired filmmakers so often that they have went on to make not one or two but almost ten movies based on the book, in many languages. While the first one was made in 1927 by Naresh Mitra, P C Barua made the first Hindi version in 1936 starring KL Saigal as Devdas. The latest one, which is actually was quite a deviation, is DevD which was released last year. With a story as compelling as Devdas, each film has been loved. We of course have softer corners for Bimal Roy’s 1955 classic starring Dilip Kumar and Sanjay Leela Bhansali’s 2002 epic starring Shah Rukh Khan. Both these movies have been equally successful at the box office and award functions. We really can’t overlook P C Barua who was so smitten by the story that he actually made the film thrice: in Assamese, Bengali and Hindi!

Post the disaster of Mera Naam Joker, Raj Kapoor needed something to reinstate his financial standings. Especially since that film took ages to make. And he introduced his son Rishi Kapoor opposite another newcomer— the stunning Dimple Kapadia. Bobby gave love stories a new found josh, which so many directors went to try in their own way, some successfully. Young rebellious love is not restricted to an era. Bobby was a hit and remains a hit with the youth! It is needless to say that not only did Raj Kapoor’s banner fly again, he also gave Bollywood two new stars.

Commitment phobia was probably dealt with in Bollywood, at least not in this way. Salaam Namaste hit the nail right on it’s head when it comes to the way modern relationships work out. It not only dealt with the phobia, but also showed living in as a preferred way of life among the youth. Clearly this film as path breaking as any other and the audience loved every bit of it. Saif Ali Khan plays a person who hates hospitals and doctors and is ever reluctant to get in to institution of marriage. And Preity Zinta played his partner who decides she would give birth to her babies with or without marriage.

Aapke Pao Dekhen. Bohot haseen hai. Inhe Zameen par mat utariyega maile ho jayenge. You can’t help falling in love with these lines. The whole film is nothing less. One of the most adventurous love stories of it’s time Raj Kumar and Meena Kumari breathe life and romance to make this a must watch. The story is about a forest ranger falling in love with a courtesan and how they took on the world to stay together. To think of it, this movie almost never got made after a couple of people signed for it died and some walked out. Kamal Amrohi deserves a salute for giving as Pakeezah.

Love does not always have a happy ending. And also you could find love in the strangest of places. If you don’t believe in this, watch Amar Prem and you might just start believing in that. Amar Prem stands amar in the mind of anyone who has seen in. A love story between a rich married man and a prostitute, Amar Prem was no less revolutionary than any other movie. Yeh Aansu Poch Daalo Pushpa… I hate tears. Rajesh Khanna and Sharmila Tagore play parts in a love story, which was never expressed and a love story where the lovers lived but never together! This one is a masterpiece by Shakti Samanta.

Just when you thought love stories could be so rebellious than it makes you go against the whole world, Sanjay Leela Bhansali made Hum Dil De Chuke Sanam. HDDCS had a completely new story where the husband tries helping his wife return to her lover though he loves her a lot. And by the end of the journey the wife falls for her husband! Salman Khan loses his girl yet again as Ajay Devgun proves that giving is a more significant way of expressing love. 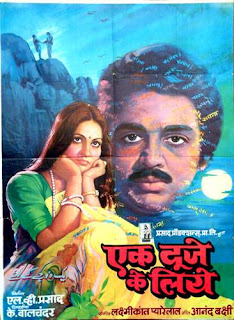 While movies are still being made on how love knows no barrier, K Balachandar showed us just that in 1981 with Ek Duuje Ke Liye. The story was about a Tamil guy falling in love with a Hindi girl, both incapable of communicating to each other through their respective languages. Add to that their parents despise each other and the whole universe seems to conspire to separate them. But they unite in death. Ek Duuje Ke Liye is almost a sure shot way of getting yourself some tears. Kamal Haasan and Rati Agnihotri are just brilliant.

After ages of love stories where the protagonists were sure about their love, Hum Tum brought on to the big screen the sensibilities of the Generation Y. While love remains as strong, there is also a strong sense of confusion. Kunal Kohli’s Hum Tum not only gave Saif Ali Khan a National Award, it gave young girls and boys a chilled out love story that they could identify with.

There are many other films we are sure you would love to watch. So many other names right from classics like Pyaasa to trendsetters like Jab we Met, Love Aaj Kal and Kuch Kuch Hota Hai… and of course Lamhe and Baghban. We mean no disrespect to any of these great works. Just be entertained and show more love!

The media is free to record our lives: Amitabh Bachchan
Sound resolution!