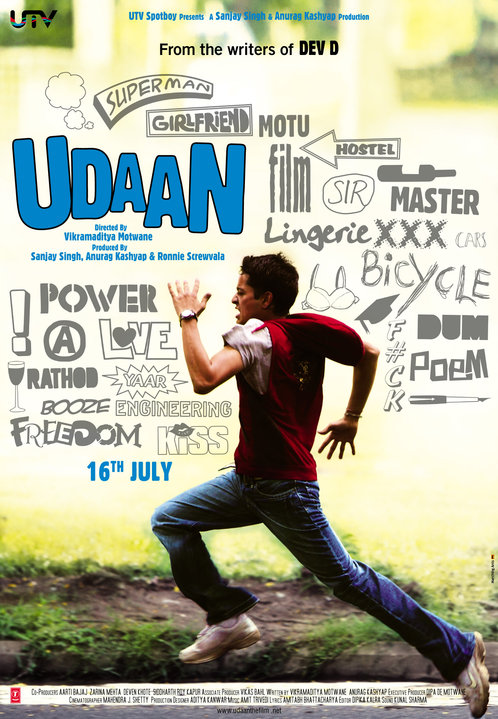 We have the right to freedom, freedom of speech and freedom of religion but what about the freedom  to dream? It may  not be a fundamental right in the constitution but it is fundamentally right to pursue our dreams. This has been dealt with in movies like Taare Zameen Par and 3 Idiots but Udaan is about fighting against all odds and finding the strength within to realise your dream.

The movie starts off with Rohan (Rajat Barmecha), a 17-year-old boy, who studies in a boarding school. He’s a motherless child whose father (Ronit Roy) has not bothered to see him for the last 8 years.

But now he has to go back to Jamshedpur to his hardhearted father as he’s expelled from school.

The plot of the film is about Rohan trying to live with his uncaring father and his step brother (Aayan Boradia) and trying fulfill his dream. He is forced to study engineering by his father but his heart

lies in writing. The scene where he sees metal being pounded by the machines seems to him like his father trying to mould him the way he wants to. Despite all the problems in his life, Rohan manages to keep his dream alive. He takes all his angst out on paper. He takes his father’s car out at night for a spin without his knowledge, befriends three college seniors and drinks and smokes to forget his worries.

The repetitive nature of the plot makes you wonder if Kahaani khatam hai ya shuruwaat hone ko hai? (Is it the beginning of the story or the end?) But far from being a drag, it emphasizes the hesitating decision making of the protagonist. It’s a situation where a person is not able to decide if he should stand up for himself or give up. So, there are instances that show the character fight-give up-fight and give up again.

Newcomer Rajat Barmecha looks fragile and innocent but during the course of the film not only do you feel that the character of Rohan is maturing but also that Rajat is growing as an actor. This development is effectively captured in the morning jogging scene. Ronit Roy manages to play the role of a strict father without overdoing the anger, the guilt and the selfishness of an uncaring father. Aayan Boradia, who plays the role of Rohan’s step brother, wins your heart. The little one manages to show how his character retains his innocence despite his ordeal with his brutal father.

Monjot Singh (the sardar from Oye Lucky Lucky Oye) plays his small part so well that you remember his dialogues even after watching the film. He brings in some comedy into the dramatic film. Same goes for

Anand Tiwari (the guy who became famous with the Jaago Re ad!). His Mishter Appu character comes at a time in the film when you miss having Manjot Singh’s humour. Ram Kapoor plays the affectionate

uncle (Ronit Roy’s brother) who seems to be the only person who cares in Rohan’s monotonous life in Jamshedpur.

Amit Trivedi’s inspiring music and Amitabh Bhattacharya and Anurag Kashyap’s apt lyrics give you hope and does not divert your attention from the film. Cinematography by Mahendra Shetty sets the mood of the film and the background score complements it. Udaan got critical acclaim because it is a sincere effort by director Vikramaditya Motwane but it deserved a better response from the audience.

In an interview, he suggested that some of his own experiences with his father (who has separated from his mother) helped him make the film better. This movie is written by Vikramaditya Motwane and Anurag Kashyap in such a way that it appeals not only to youngsters but to the adults too. Everyone will identify with the angst, the helplessness and the true sense of aazaadi (freedom) in the 17-year-old boy’s story. And all this is achieved without over the top budget, big stars or an item number. A truly commendable effort indeed!