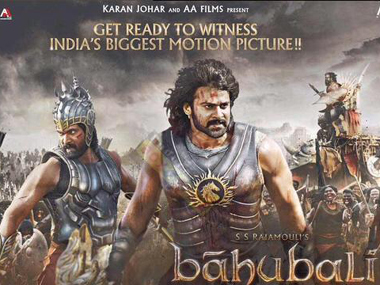 When you go in to watch an SS Rajamouli film, you probably need to be willing to suspend your beliefs. Beliefs in physics… or for that matter belief in anything. He is the man who had scored with almost laughable concepts like Eega (Makkhi). Once you are willing to accept that a 100 feet fall from a rocky waterfall does not hurt a man even a wee bit, you should be ready to watch this master director’s latest – Bahubali: The Beginning.

But then nothing prepared me for what I saw for most part of the first half of this massively mounted film. Promoted as the most expensive Indian film ever, Bahubali promised a spectacle of visual effects. And considering Rajamouli has successfully blended VFX into his stories in his past films I expected him to manage this too. Alas! What I got to see is some dismal work; so bad that it just reminded me of some DD shows. So bad that I was almost unsure which is worse, this of Rajnikanth’s Kochadaiiyaan! For most of the first half of the film I was left in a lurch, unsure what to expect… and why! Incredulous sequences, shoddy CG, continuity jerks… the list is just bad. That’s when Rajamouli rises, like a phoenix. The second half of the Bahubali overcomes all that was messed in the first half of the film. As if it signified the rise of the hero… And suddenly there is not just some compelling screenplay, but one of the best choreographed war sequences I have ever seen in Indian cinema. My friend who accompanied me to the film was in fact left at the edge of his seat, in excitement and anticipation. And my belief in Rajamouli was reinstated.

Special kudos should also go to Sabu Cyril (Production design); Peter Hein (Stunts) and the sound department. Of course the actors are every bit perfect too. Be not surprised if you see girls whistle as Prabhas (Bahubali) does unimaginable aerobatics and flexes his biceps!

Rajamouli is not just one of his kind; he is one of the best that we have in the country. The man not just has a vision but repeatedly manages to reign it into reality…

Bahubali in its essence is probably inspired from the Mahabharat. Only this one has a different end.  It is an epic revenge saga – a son to avenge his father. This is Game of Thrones of its own kind! And as it ends, it feels almost as addictive as the American TV show! I certainly can’t wait to watch the concluding part that releases early 2016.