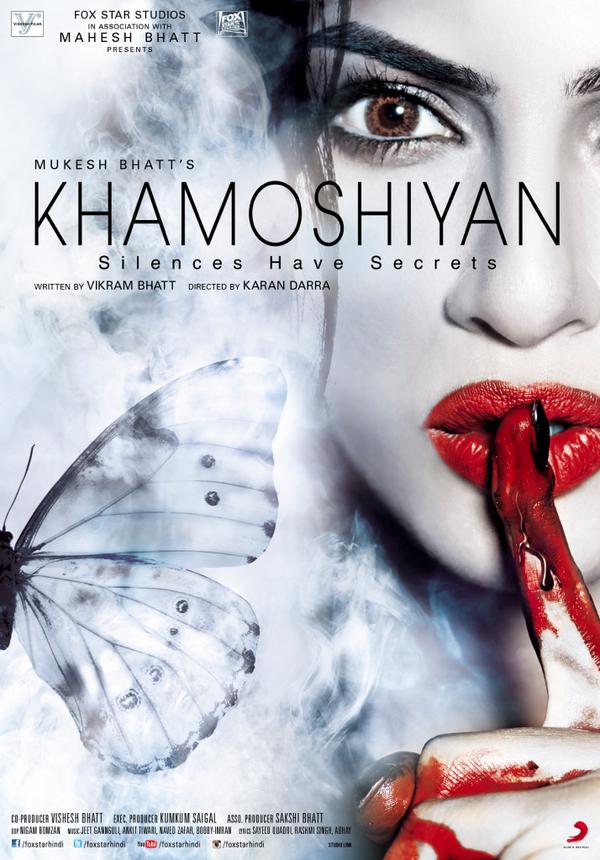 A viewer’s pain: The horror of watching Khamoshiyan Shhhhhh… let’s not talk about watching this one!

With the release of the teaser of Mahesh Bhatt’s Khamoshiyan, speculations did arise about the film possibly elevating the standard of Bollywood’s horror genre but once again it has been proved that in India, ghosts do not scare! No doubt the film has all the requisite ingredients to allure the audience: a sexy diva, two handsome hunks and a couple of titillating scenes (though poorly performed), but on the whole it fails miserably to make any substantial impact on the audience’s mind.

The story starts with Kabir (Ali Fazal) getting bashed by his ex-girlfriend’s present husband for deliberately leaking an MMS in order tocreate commotions between them and his subsequent expedition to some really picturesque locations to ‘find’ a story for his next novel (Yes, Kabir is a writer whose last book was published several years ago). His quest for a story lands him in an isolated and spooky hotel (or perhaps a house) where he comes across the conventional Bollywood temptress Meera (Sapna Pabbi) who is the receptionist-cum-chef-cum-manager-cum-cook-cum-waiter and the only living entity in that magnificently colossal building. Meera’s attributes (mostly physical) and highly ‘philosophical’ words entice Kabir in no time. On his very first night’s stay in the hotel, he dreams of being seduced by her but his fantasy is disrupted by some unusual happenings in his room that scare the life out of him but, unfortunately, not of the audience. With every passing day his affinity towards Meera escalates before he observes some mysterious traits in her that motivate him to find out the secrets surrounding her life. His endeavor does yield fruitful results when he finds out that Meera has actually been trapped in that hotel by her deceased husband’s (Gurmeet Singh) spirit who had been a worshipper of Satan in his life and this revelation renders Kabir the messiah of Meera’s emancipation. He leaves no stone unturned to free his ladylove from the stranglehold of her husband’s evil spirit.

‘Khamoshiyan’ is undoubtedly one of the most disappointing films that have and will hit the theatres in 2015. The storyline is obnoxious and utterly predictable; the ‘secrets’ are disclosed prematurely resulting in loss of interest even before it is built.  There are one or two scenes that are somewhat scary but the incorporation of the ‘portal’ and black magic paraphernalia render the story acutely bizarre and unconventional. Moreover, the exceedingly philosophical discourses between the actors tend to weary the audience at times. Performance wise, all three actors have done well but the lack of a substantial plot and a well-carved script obscures their efforts. The only good thing was the music that comes in as a momentary relief in between the lousy story. Conclusively, it can be stated that after ‘BABY’ and ‘PK’ ‘Khamosiyan’ is not the film one would like to buy tickets for!