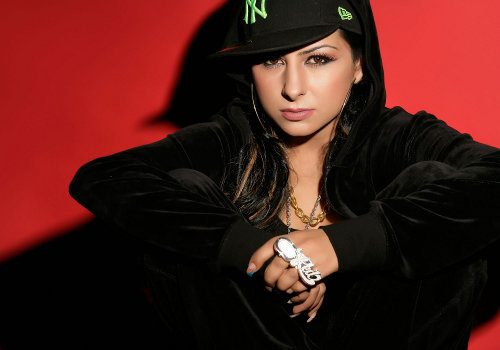 Fighting it out: Hard Kaur When 11-year old Taran Kaur Dhillon reached UK in 1991 with her family she was in for a lot of change. She had to deal with discrimination, learn English and also cope-up with extreme reactions from the Indians who were too protective about their culture. And amidst all these she figured out that she wanted to be someone different. Inspiration came in form on hip-hop music and rap. She decided that rapper is what she wanted to be and worked on herself. And when she was ready, she took to stage and showed her talent. Today we know her as Hard Kaur, who claims to be India’s first and only female rapper!

We at Fried Eye spoke to the rapper and returned quite inspired and awed.

When HK reached UK she was called a ‘Freshy’- a term used for people who just immigrated to the country and are not familiar with the ways there. “It was terrible but I used tell them that one day I will become the freshest!” she says in an UK accent. And when she did start talking in English the Indians were upset. “They used to say why I speak n English. Now what am I supposed to speak in when I am in England. All Indians there know Punjabi as that’s officially accepted,” she says. But the accent does not take away her love for India and her culture. “I am proud to be an Indian and a Punjabi,” she says adding that being a Punjabi also gives her spirit to fight adversity. And how she has fought it this far! “You don’t know what I have gone through. UK is very male dominated. Girls can’t do it. These boys get so bad. My shows used to get cancelled. Then I found out what was happening and started sending bhai log to them. Everything was sorted!” she says without any regret. “They have always believed that Indians don’t fight back. But they have only known the older generation. Our parents always preferred staying safely but our generation gives it back! I believe we are better and that was a prominent part of my songs too when I started,” she explains.

Becoming a rapper was not easy. Among other hurdles was opposition from her family. “My mother tried forcing me to learn singing and dancing. But that was not me. Singing meant I would have to be girlie. Rapping was more like what I wanted to be and I decided to get into that. But then there was no point just being one if I could not be among the best. I trained myself for over ten years,” HK says. She taught herself the art of rapping till she was confident that she could take on any challenge once she goes into the streets.

She was doing pretty well and on the verge of going to America when her mother told her that she should try India. That’s when she did ‘Ek Galasi’, which became so popular in India that she discovered a whole market for her talent. “‘Galassi’ was supposed to be a cheeky song which I expected to be banned. But it became a hit!” she laughs. “I came to India to do a few shows and then I met Shankar, Ehsaan and Loy who asked me to come over to their studio to jam. Move You Body in Johnny Gaddaar followed and today I have done quite a few numbers in Bollywood!” she says And as she rises in the industry she says that she never had to struggle except in one thing. “The struggle is not to be a whore!” she says. “It’s about staying the same rather than being the same as everybody else. What’s the use if you turn out to be the same as everybody around? I am different and I like it this way. And people like me too!” she adds explaining her stand. Her aim right now is to become far more popular, earn good money and make rapping a more accepted art in India. “You think of Bappi Lahiri when you think of disco and you think of me when you think about
Hip hop. People are getting educated but there is a long way to go. Lot of people do not know what rap is and they need to be educated. And also right now what I am doing in Bollywood is a rather diluted form on actually rapping.

Now she is even getting into acting! She has done a role in Akshay Kumar’s soon to release ‘Patiala House’ and HK says she had good fun doing it. “Beside the fact that the character is really funny I connected with the script. It is about Indians in London, people who stay in Southall,’ she says. “And now I am looking forward to act more. I am actually hoping to do a villain’s role some day. That will be awesome fun. Maybe something like Kill Bill!” she quips.

Amidst these, the 30-year old also negates pressure from her mother to get married. “But thankfully my mother keeps changing her mind every week. One week she is after me to get married, next week she will say I can follow my dreams. I tell her I am busy right now. I have to earn money first,” comes her trademark laugh. Hard Kaur is here to stay!

Dancing with Prabhu Deva was scary: Madhuri
Films that you could gift your date!