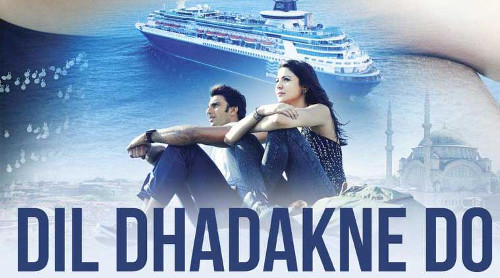 Dil Dhadakne Do: When Life Sails like a Cruise

To revel in watching Dil Dhadakne Do, you have to understand two things-one, Dil Dhadakne Do is not ‘Zindagi Milegi na Dobara’, and two, Dil Dhadakne Do is not a ‘family drama’ in the truest sense of the term. Then what is it? Well, it’s a movie, a film that is unique and beautiful in its own way. Written by Zoya Akhtar and Reema Kagti and directed by Akhtar, Dil Dhadakne Do is about the hypocrisies of the elitist life; it’s about the nothingness that underlies the extravagance of the so called sophisticated upper class existence. The story revolves around a rich and erudite family fathered by a self-made entrepreneur Kamal Mehra (played splendidly by Anil Kapoor), his wife Neelu (Shefali Shah) and their two offspring Ayesha (Priyanka Chopra) and Kabir (Ranveer Singh) who goes on a cruise to celebrate their 30th anniversary. Okay, let me speak no more about the story; I leave it upon you to discover. Now, there was a rumor prior to the release of the film about a guest appearance of Amir Khan. To speak the truth, it half a rumor! Amir is there all right. But not as a guest. In fact, Amir plays the most important role in the film, the narator who, although happens to be a dog, almost facilitates the anagnorisis. It’s rather Farhan Akhtar who happens to be the charismatic guest.

Dil Dhadakne Do, the title may seem a little out-of-place in the beginning, is a commentary, a reflection on how covetous and pseudo-sophisticated the modern civilized world has become and Zoya triumphs in her endeavor to foreground the ‘realities’ of a society that a bourgeoisie always aspires to become a part of. She has persuasively managed to juxtapose romance, humor and drama without letting any character, which are quite in number, look detrimental. However, on a severely critical note, the film drags a bit too far in the pre-interval phase but the post-interval is a treat to the eye, festooned by the flawless performances of Ranveer, Rahul, Priyanka, Anushka, Farhan, Anil and most importantly, Shefali (I wonder why we don’t get to see more of her in Bollywood). The climax is a bit dumb and the sudden disappearance of Anushka from the frame tends to leave the viewers in a “Oh Ranveer should have met her!” state of mind. Keeping aside such ‘it-could-have-been’ blemishes, the film conveys a number of messages that is sure to impinge the minds of all those who have watched or are planning to watch it. After all, it teaches you to listen to your heart, let it beat and stand for yourself.