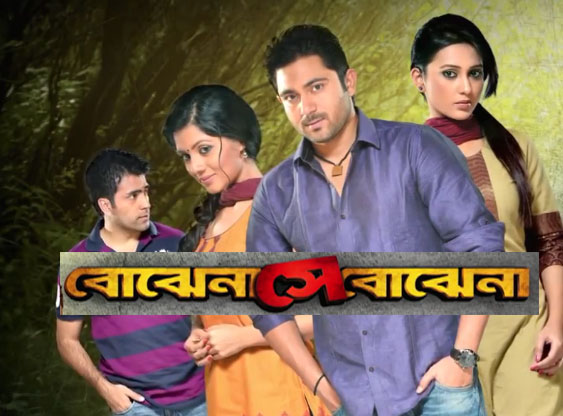 Okay, so I have finally watched the much talked about Bengali movie ‘Bojhena se Bojhena’ of 2012, directed by Raj Chakraborty, and I could not refrain from jotting down my experience even before the end-credits rolled. The movie begins with a head-on collision of two rocket buses and, well, people die, most them being the ones whose role were to, well, just die. The story then goes into flashback where we are briefed on the lives of a few, very few boarders of the bus. And the rest? Come on, they are just supposed to die.

The first story, no, the love story that you are subjected to is that of Joyeeta (Payel) and Avik (Abir). Joyee has come to Kolkata for a job-interview. She arrives late at night and spends the entire night in the bus depot, STANDING! She was supposed to be received by her aunt who, quite unpredictably, has to cater to her husband who has had a stroke the previous night. Alone and naïve Joyee has no idea where to go and STANDS there seeking help from random people. And this is where the main twist comes! A handsome Avik arrives at the depot and, you would not believe unless you see it, offers to help our lady in trouble. Now, when I say ‘help’ I don’t mean the help that you and I would offer to someone we are not acquainted to; Avik’s help is of the elevated kind that starts with assisting Joyee in finding the address of the place of her interview to actually dropping her there. Wait, the help doesn’t end here! After successfully escorting her to her destination he even serves, involuntarily though, to keep her luggage till the interview is over. Guess what, the help doesn’t end even here! It ends with our extremely helpful Avik shepherding our poor innocent Joyee to her aunt’s place. And for all his exemplary benevolence, Avik is treated with a ‘Gold Flake King’ by Joyee. Such novelty!

Now the second parallel story, the story of Nur (Soham) and Riya (Mimi). Nur works in a factory in Malda and earns six thousand bucks a month. He falls in love with Riya who lives a terrace away from his. He secretly admires her every morning as he brushes his teethuntil one day he finds her sitting inside his room. Surprised? There’s more! Riya without mincing her words puts Nur’s love to various tests that range from blood tests and conformation to posthumous donation of organs to age verification. She also sends Nur to meet her father who is a policemanand herself informs Nur’s parents about their blooming relationship. Quite an audacious girl!

Now, the two stories mentioned above have no connection whatsoever with the accident except that one lover from both the tales perish in the collision, Joyee from the former and Nur from the latter. As a matter of fact, one has no idea what Avik and Joyee are doing on the bus. The film undoubtedly arouses pathos, draws tears in your eyes, but what it fails to do is make sense. I mean why does one need to resort to a two hours and thirty minutes long love-drama to convey a simple message viz.“Drive safely”?

“Bojhena se Bojhena” is a film that excels in special effects and clichéd love affairs. It is a perfect juxtaposition of the transitoriness of human life and accidents caused by rash driving. It not only acquaints you with the carelessness of Indian bus-drivers but also highlights upon more important issues as the dilapidated condition of the Indian highways and the problems caused by the unavailability of proper mobile phone signal. Conclusively, it is a multi-starrer movie focusing on multifarious issues.

Dil Dhadakne Do: When Life Sails like a Cruise