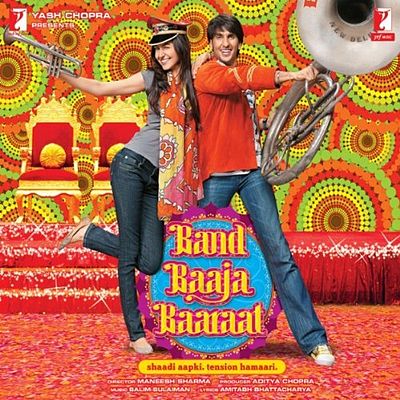 Cast: Dilli, Ranveer Singh and Anushka Sharma
Bread pakode, choco bar at India Gate, raaste ki chai in kaanch ki gilaas and the shor sharaaba of saddi dilli! The dillipan seems to be one of the lead characters of Maneesh Sharma’s Band Baaja Baaraat. It captures the dilli style zindagi which is a topic that has interested many filmmakers. People who are not familiar with it can understand it through such films which bridge the geographical gap and let you experience the khichdi of unrefined, urban Delhi environment. What happens when a Saharanpuri chichora with no lakshya meets a Janakpuri kudi with tarkeebein? Well, you don’t need to be an Einstein to figure that out. But the way the writer wants to show how Bittoo Sharma and Shruti Kakkar handle each and every situation in their own desi way is what is attractive in this film.

Shruti Kakkar firmly believes “Jiske saath vyapaar karo usse kabhi na pyaar karo”, until she meets Bittoo – bhukkad – Sharma. The guy with his earthy and tacky style tries to woo her and she avoids with him ease. But when the non-stop munching and yawning Bittoo is asked to come along with his ataichi (suitcase) to Saharanpur as the ganne ke khet are waiting to be cut, he decides he would rather settle for the binnuss (business) of wedding planning which his father terms as janaaniyon ka kaam (women’s job).

Bittoo with his raw charm and quick wit manages to convince Shruti to be his partner in the venture. After a lot of ups and downs, Bittoo and Shruti work together and manage to become famous in Janakpuri as ‘Shaadi Mubaarak’. They have their successful team of the phoolwaala, dhabewaala and the yo-dude band. But then pyaar comes in the way of vyapaar. The rest of the film is about how they figure out what they want in life and trying to pull-off the grandest shaadi they have ever handled.

This film acknowledges the fact that desi is cool and you don’t need to hi-fi to be successful or chaato some big shot ke talve to get ahead in life. The story is not new but the dialogues are like pataakaas. It’s like that lambi laal pataake ki ladi (long red strip of crackers) of witty dialogues that bursts one by one till it reaches the end. So, even if there’s a serious scene, apna hero Bittoo will not mope or give up, he’ll still continue doing his down-market harkatey and finally get what he wants. The personality of the characters is consistent in the second half too though it is the emotional-climax part but with the same mast and mazaakiya attitude as the first half.

Anushka Sharma doesn’t overdo the emotional scenes and shines in all the dance sequences. Ranveer Singh too manages to get that paagalpan of a vela gabru jawan in all the songs and scenes. Even his irritating gazing and constant chomping manages to not just get a smile on your face but also laugh out loud. His dialogue delivery is so dilli istyle that in some scenes girls might just wanna slap him when he flirts. But that’s how convincing he is. He may not be as good looking as his contemporaries but he has this SRK-like (not trying to compare) magnetic charm which definitely works. He supposedly has a 3-film contract with Yash Raj Films. With this film, he has made a confident debut and it seems like he’s here to stay. The other characters like the dhaabewaala, the phoolwaala, the yo-dude lead guitarist cum DJ, Anushka Sharma’s bauji with a huge waistline and even the baraatees seem so natural that you don’t feel like they are actors. So, there’s a good balance of natural acting and filmipan.

The music by Salim – Sulaiman has dilliwaalon ka flavour and beats but it also has a lot of youthfulness to it. Salim Merchant has sung the most popular song of the film – Ainvayi Ainvayi, which is very different from what he has sung before. But his sufiana cum western voice suits this full on paisa vasool song perfectly. The lyrics by Amitabh Bhattarcharya are fresh, funky and faadu. I mean seriously, chai mein dooba viskut ho gaya, main to ainvayi ainvayi lut gaya is truly delicious. Choreography by Vaibhavi Merchant just brings the music and lyrics to life. Her steps are so cool that you can’t stop yourself from trying them while watching the songs. In Tarkeebein, the scene where the leads walk in one direction and the rest in the opposite is executed really well. In Dum Dum, the lighting effects are mind blowing and it shows that a lot of effort has been put in to make the song look concert like. For that the credit goes to the Director of Photography Aseem Mishra. It seems like Maneesh Sharma was lucky to get this song for his film, which was originally to be a part of Rab Ne Bana Di Jodi in which he was the assistant director. And of course, Ainvayi Ainvayi is one of the catchiest songs of this year and the signature step is an instant hit. Director Maneesh Sharma, who has also written the story and Habib Faisal have made a film that captures the Delhi spirit with a new andaaz.

You will enjoy watching this film thoroughly especially if you have experienced the dilli mohalla atmosphere. But those who have not will learn more about Delhi, just like they have learnt about Mumbai all these years through Hindi films. Band Baaja Baaraat is a family entertainer (no no, please don’t think it’s like K3G) of the new generation and hassi is guaranteed, moder pomise (mother promise).

Turn on the music
Big cheers to small efforts!