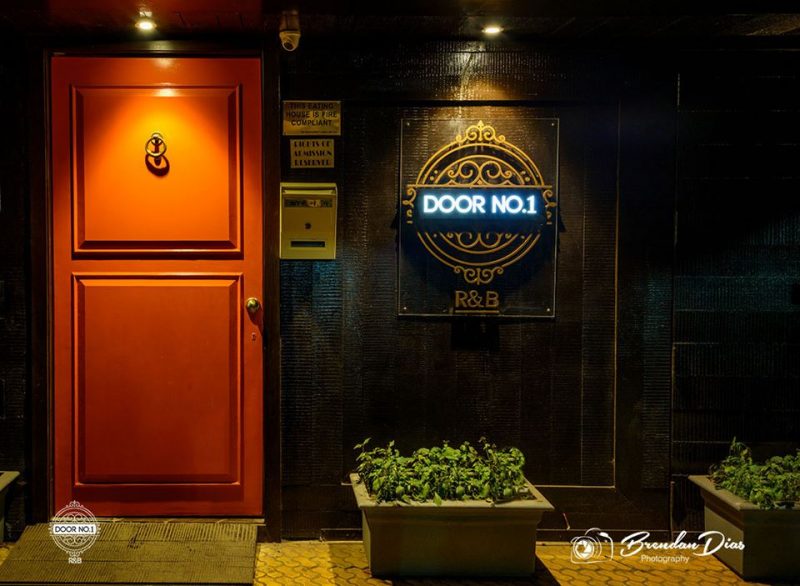 I came to know Mihir Bijur back in 2008 through twitter. A fellow blogger introduced me to shaadidotcom twitter handle saying, “She is very interesting”. It was through Shaadi.com that I came to know about Mihir Bijur. It took me more than 2 years to know that the same person was behind both the handles. Shaadi.com became the most engaging brand in social media under Mihir Bijur. It won several national and international awards. After having such a successful career, Mihir Bijur quit his job to follow his passion. Together with Vishesh Khanna, he started a venture Door No. 1, a retro bar in the posh locality of Bandra, Mumbai. This venture is a Retro Bar that claims to be your own Nostalgia House Party.
Fried Eye: You’re one of the first social media heads in the country. How did it all begin?
Mihir Bijur: It all started in 2008 when “Social Media” was just blogs, Orkut and text status updates on Facebook. The world was waking up to the power of the internet. I used to be in the field of Public Relations back then when I went for an interview at People Group. The visionary CEO Anupam Mittal hired me to be a part of People Group’s Corporate Communications team and gave me the responsibility of setting up Social Media for them, which back then was unheard of at a corporate/brand level.

Fried Eye: You built a special persona for Shaadidotcom Twitter handle and the consistency won you, admirers. My girlfriend even thought that I had a secret affair with the girl behind the handle. Tell us the story behind creating the persona.
Mihir Bijur: Well, Shaadi.com is a marriage portal and the toughest part was to change the perception of it being an “arranged marriage” website, to a cool brand which was about ‘Slice of life’, because Marriage truly is that. It isn’t a just the union of 2 people, but also of their families and friends. Every relationship in the bride and groom’s lives are at play. We started off with 3 #tags namely #ShaadiHumor #ShaadiTrivia and #ShaadiSurvey to express how we were full of humour, knowledge and cared about people’s opinions. Not so surprisingly we got a fabulous response from one and all on social media. We were also one of the first brands to start using images to express our text Facebook updates. Before that, (the few) brands who were embracing social media were only adhering to text updates. We were also the first to use hashtags on Facebook, much before Facebook itself introduced them on their platform.
Fried Eye: Your Angry Brides campaign won you many accolades. Tell us about Angry Brides. How did it all began and if that changed you as a person?

Mihir Bijur: Shaadi.com is a much cooler brand than perceived back then. One of the best way to show people how we really care as a team was to take up a taboo that was closely related to what we provided as a service. So at the risk of putting off many people, we decided to stand for what was right and decided to do so through a fun interactive way to get the message through.

We made this simple game which also helped people to receive their stress and do so for a good cause. The initiative went viral in over 28 countries around the world and won several Indian and international awards. This was also covered by most of the reputed publications, TV channels and radio stations around the world including the coveted Time Magazine. We won a lot of accolades, and more importantly millions of hearts around the world. Of course, this meant a lot of sleepless nights for me because I was the one-man-team at this point. This campaign put Shaadi.com on the international Social Media map. Post this we took up a lot of causes and the world media and global audience supported well. We wouldn’t just trend on Twitter but would do so for days together. That’s how strong and overwhelming, the response was for all our campaigns.

Fried Eye: How and why did you get into the restaurant business? And why this radical change?

Mihir Bijur: I’ve always been a music buff, to a point of obsession. You would always spot me with headphones on listening to music as my ideation worked best with music on. I’ve always believed in the science of music and how your mind is a jukebox with every important memory stacked up as a song. Which is why when you hear a song, it always takes you back to a memory. This is how you can use music to pull you up when you’re low, and ground you when you’re flying higher than you should be. Retro Music is empowering, which is why we dance so much at house parties. My partner Vishesh Khanna and I would often joke about how there is no bar for people in our age group. After many such parties, we realised that this was actually a great opportunity. 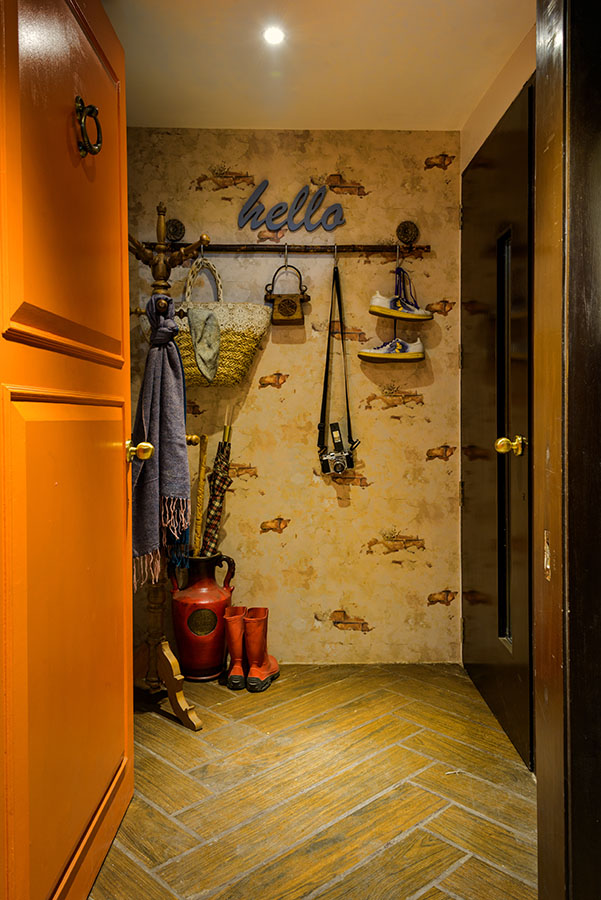 Fried Eye: What was the vision behind Door No. 1?

Mihir Bijur: Door No.1 began with the vision to bring retro back using great music, an amazing house-party vibe and delicious yet quirky food for an age-group which sadly doesn’t have too many places to go to. We wanted to create a community and not just a bar. one where like-minded people of a certain age group could connect regardless of whether they came alone or with company. That precisely what we see today. Everybody knows everybody at Door No.1

Fried Eye: Bandra is known for retro bars. You surely faced comparisons. How did you make Door No. 1 stand out?

Vishesh and I have both loved Hawaiian Shack all our lives and partied so much there. We wanted to take it one step ahead and create one BIG House-party for all. We literally have done so! We have a living room, a gaming den, a library and a private dining area (built like a basement) where the music is softer for conversations.

Fried Eye: What’s the biggest challenge in running a restaurant?
Mihir Bijur: There are a lot of challenges in running a restaurant. Right from pricing, to the food, but the most important challenges we faced at Door No.1 was getting the vibe right so people would feel like they’re at a house-party where they can let their hair down without any bother. Thankfully, the most common compliment we get at Door No.1 is “I just love the vibe”.  The second biggest challenge is constantly innovating. Each day the week is something different and we don’t hesitate in changing the entire look of the place to suit the night. We are not even a year old and we were already listed in the Top 20 Bars of Mumbai by Times of India. We must be doing something right.
Fried Eye: Door No 1 has been visited by celebrities. Any memorable celebrity encounters at your restaurants?
Mihir Bijur: We’ve had many celebrities who’ve come to have a good time at Door No.1 (many are repeat guests as well). It’s probably because our average audience starts from 35-38 years in age and goes right upto 65 years. People who’ve ‘been there, done that’ and just want to go back to their happy place in their minds.
One memorable incident we had was when the legendary Dalip Tahil came for our Retro Bollywood night where we start with the 90s and go right back to the 60s as the night progresses. We play everything from Junoon’s Sayonee to Humma Humma, to Tamma Tamma, right back to Shammi Kapoor’s Yahoo. As we reached the dance part we didn’t realise that most songs we were playing in that hour were from films that he had starred in. He came up to us and jokingly said: “These are all my songs, am I that old!” We all laughed together and continued dancing with him.
Fried Eye: Starting a restaurant and that also in a posh location like Bandra needs loads of investment. Not being from a food industry background, was it difficult for you to convince people.

Mihir Bijur: Yes, it was. We knew the potential of our concept and the belief that it would become of the best bars in the country, but conviction has no value till delivered. We had to invest our entire life’s savings to set this up. This also pushes us to do well, because not doing well isn’t an option for us.

Fried Eye: You are also a fitness driven person. Does it reflect in the kind of foods served in Door No. 1?
Mihir Bijur: Fitness does come into play in generous dozes at Door No.1. However, nostalgia comes into play very generously in our food. We have a section called ‘Single’s Day Faux Pas’ which hosts dishes that we have all cooked up using whatever was available in the kitchen whilst studying last night in school/college. Dishes like Maggie + pav bhaji (Maggi et al) Butter Chakli + chopped onions + sambhar (Mihir’s Faux Pas) and Chicken chilli bowl + broken roti topped with fried noodles and schezwan sauce. This section also happens to be the best-seller at the bar.
Fried Eye: We were being told that Door No. 1 keeps sanitary pads in women’s toilet. Tell us more about this wise decision.
Mihir Bijur: My partner and co-founder of Door No.1 Vishesh Khanna had noticed how this is an inconvenience to women we’ve gone out with, be it family or friends.  There is a serious lack of hygienic convenience because of the fact that menstruation is such a taboo even in modern India. That’s when we decided that we won’t let this become a taboo in our restaurant. India, on one hand, is progressing in industrial and technologic prospect, but a large section of society still considers something as natural as menstruation a taboo. We sadly live in a blue ink advertising society that is okay with all bloodshed in movies, but not a drop of it in an advertisement that’s about something so natural. Menstruation is a part of the cycle that involves procreation and deserves logical acceptance. At Door No.1 we decided to take it up to do exactly that with breaking the taboo.
Fried Eye: There is also a PlayStation area in Door No 1. This actually goes against the concept of retro. So, how did you guys decide to keep it?
Mihir Bijur: We have a gaming den at Door No.1 which hosts a lot of board games that we grew up to like brain vita, uno, scrabble, monopoly and many more. We also have a playstation to add a modern blend to the otherwise retro bar. 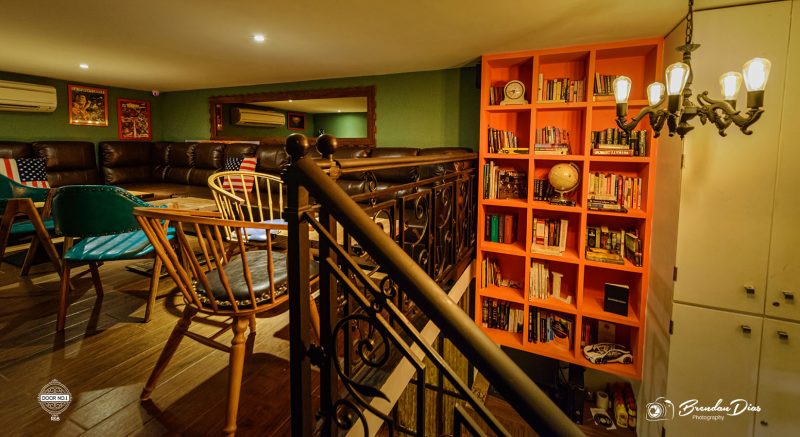 Mihir Bijur: DJ Russel is our resident DJ at Door No.1. He also happens to be one of the best retro DJ in the city with over 22 years of experience under his belt. He along with his wife Ayesha and our Sound-expert Nasan have been with us from Day 1 and been an integral part of the planning and execution of the idea. The brief for the team was simple; a belief to bring retro back to the country. Nostalgia has been our pivot and we’ve built everything around it. A lot of people said that we won’t do as well, but now we have a lot of other bars following our most popular nights. No complaints, we are happy that we are actually bringing retro back! 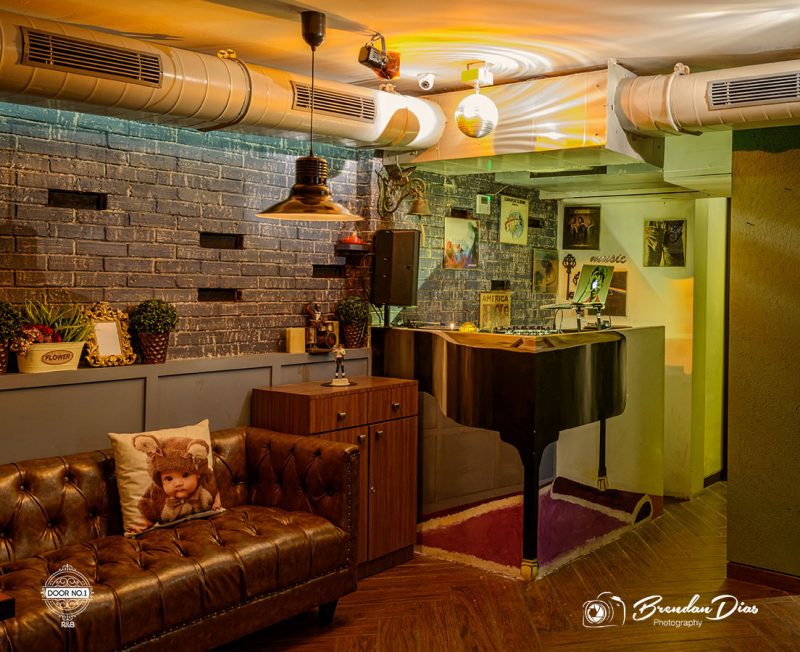 Fried Eye: Any future plans for expansion?
Mihir Bijur: We plan to take Door No.1 across India. Starting with another one in Mumbai, and then expanding to Pune, Delhi, and Bangalore. We will plan more cities in time to come.

Note: The images used in articles were provided by Mihir Bijur and used with his permission.