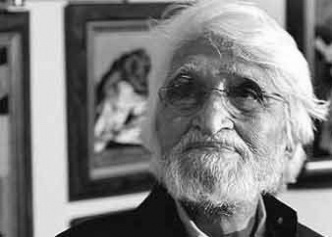 M.F. Hussain – A tribute to the great artist

“Lives of great men all remind us

We can make our lives sublime,

And, departing, leave behind us

Footprints on the sands of time;”

Perhaps the words aptly describe Maqbool Fida Hussain, a name that is synonymous with Indian Modern Art and Paintings. On June 9, he breathed his last at the Royal Brampton Hospital, London at the age of 95. He is survived by six children-four sons and two daughters. His paintings were influenced by European modernists like Cézanne and Matisse. His themes—usually treated in series—included topics as diverse as Mohandas K. Gandhi, Mother Teresa, the Ramayana, the Mahabharata, the British raj, and motifs of Indian urban and rural life. A prolific painter, he had produced over 60,000 paintings. When questioned about such prolificacy by Michael Peschardt of the BBC in one of the last interviews he gave on May 27th, 2011, he replied that “All this talk about inspiration and moment is nonsense. Excuse us”.

As a person he will be best remembered for his bohemian lifestyle- impeccably tailored suits, a long, customized brush that he used more as a sort of “baton” and his habit of walking barefoot. He was an iconoclast, a pioneer who was never afraid of breaking free from the mainstream. He had an eccentric and a bold persona that is reflected in his paintings. The same trait that gained him so much recognition in the early years was also the reason behind the controversies that dogged him in the later years and ultimately led him into self-exile.

M F Hussain was born in Pandharpur, Maharashtra on 17th September 1915.His father worked as an accountant. His mother, Zunaib died when he was just 18 months old. There weren’t any photographs of his mother, and when he grew up, he couldn’t recall her face. It was the reason behind why he never painted the face of the women in his depictions.

He left his home at 19 years of age to the city of dreams, Mumbai (earlier known as Bombay) in search of greener pastures. He slept in the pavements at night and by day he worked as a ‘graphics-wallah’ in the nascent Bollywood industry. He painted cinema hoardings for six annas per square feet.

The struggling artist got his first break when his work was showcased in the Bombay Art Society in 1947 and in the same year, he joined the Progressive Artists’ Group headed by Francis Newton Souza who broke free from the traditional old Bengal School Painting. This movement is regarded as an avant-garde in the Indian Art scenario as it infused Western Style to the mainstream Indian Art.

From then on there was no turning back from him. In 1952, he got his first International exposure with a solo exhibition in Zurich. This proved to be a turning point in his life as it established him world-wide. It wasn’t too long before he got catapulted to the top of Indian Art scene. The rich Indians invested in his paintings lavishly for it was considered to be a status symbol to own his paintings. Within a few years he turned into India’s most bankable artist with galleries across Europe and America opening its doors to his visual imaginations. The first state recognition came in 1955 when he was awarded the Padma Shri. In 1973, he was awarded the Padma Bhushan, and in 1991 the Padma Vibhushan. He was nominated to the Rajya Sabha in 1986.

Hussain’s foray into the world of cinema started with Through the Eyes of a Painter in 1967.It went on to win a Golden Bear at the prestigious Berlin Film Festival. Later on, he made two Hindi films, Gaja Gamini, with his muse Madhuri Dixit and Meenaxi:A Tale of Three Cities. In fact, Hussain association with the artist started when he saw her film Hum Aapke Hain Kaun. His obsession with her was an open-secret. He also did a series of paintings inspired by the glamourous Bollywood actor that he signed off as ‘Fida’, the Urdu equivalent for ‘devoted’. This earned him the moniker ‘Madhuri Fida Hussain’. In addition, he had spoken of his interest in doing a project with her titled 100 Years of Cinema, just a few months before his death.

But any radical thought has its fair share of controversies. MF Hussain’s life was no different. The demons of political dogmas finally caught up with him. Some of the artwork that angered the Hindu right had been around since the 1970s but came to their notice in the 1990s.

The most controversial painting shows a nude woman on her knees, creating the shape of India’s geographic borders. It caused an outcry among hard-line Hindu groups that said associating India with nudity was disrespectful. Several legal cases were brought against him. His depiction of Hindu goddesses in the nude also provoked anger among some Hindus, especially because Hussain is a Muslim.

On February 2006, he finally left India for foreign shores and continued to live in self-exile since then. He left in the face of a vicious campaign of harassment and intimidation, including death threats, by right-wing Hindutva groups, citing his artistic depiction of Hindu deities. His exhibitions were vandalised. A number of legal cases based on the charge of hurting religious sentiments were slapped on him. When he could not respond to a summons from a district court in Haridwar, his immovable properties in India were attached. An arrest warrant was also issued. The Supreme Court intervened, but it was too little, too late. It was evident that the Congress Government could do no better than the preceding BJP-led Union Government of India. He was made to suffer because his art was deemed ‘insensible’ in the eyes of a handful of narrow-minded individuals and organizations that used this issue for their own vested interests. The stark hypocrisy can’t be more prominent when all this happens in an India where we have the ancient Khajuraho temples, whose periphery is demarcated with erotic sculptures!

In his recent interviews, he expressed his desire to return to India. Last year, in a rare gesture, the patronizing Qatar’s royal family offered him Qatar’s citizenship that he humbly accepted. He said he was content to be a non-resident Indian and that he had no qualms about losing his nationality, as India does not allow dual citizenship.“What’s citizenship? It’s just a piece of paper,” he said. “Wherever I find love I will accept it. Ninety-nine per cent of Indian people loved me and they still love me. I’m an Indian-origin painter. I will remain so to my last breath,” he said.

His love for India was something that he took to his grave. He said in an interview: “For me, India means a celebration of life. You cannot find that same quality anywhere in the world. I never wanted to be clever, esoteric, and abstract. I wanted to make simple statements. I wanted my canvasses to have a story. I wanted my art to talk to people”.

On a concluding note, the words of his old friend and Editor of The Hindu are noteworthy:” Husain-saab, although sad, was never bitter against anyone in India, or for that matter anywhere else. His quiet and dignified passing in a London hospital brings to a close one of the sorriest chapters in independent India’s secular history. I know no one more genuinely and deeply committed to the composite, multi-religious, and secular values of Indian civilisation than M.F. Husain. He breathed the spirit of modernity, progress, and tolerance. The whole narrative of what forced him into exile, including the failure of the executive and the legal system to enable his safe return, revolves round the issues of freedom of expression and creativity and what secular nationhood is all about.

Let the people of India pay their respects to a great son who, rising from humble origins, used his prodigious talent and creativity to portray and celebrate all that is diverse and wonderful about this country and the historical civilisation it represents.” This can well be regarded as an appropriate epithet to that ever-glowing star in the horizons of Modern Indian Art-M.F. Hussain!