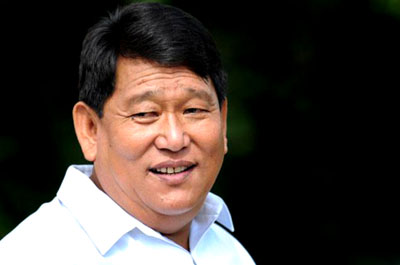 Lost among the clouds! The people of the North East were yet to recover from the reverberations of the lethal air crash on the 19th of April, 2011 at Tawang, Arunachal Pradesh that killed 17 people out of 23 on board the Mi– 172 Helicopter of the state-owned Pawan Hans Helicopters Limited; when another shocking news hit them hard. Barely 2 weeks after the accident in which the North East happened to lose an eminent musician, Mr. Rakesh Barua, the news about the missing chopper that carried Arunachal Pradesh Chief Minister Mr. Dorjee Khandu on the 30th of April set the air into a tensed mode once again all over the region.

The AS 350 B-3 Eurocopter carrying Mr. Khandu and four other people on board; including two crew members Captain J.S Babbar and Captain K.S Mallick, one of Khandu’s security officers Yeshi Choddak and Yeshi Lamu– the sister  of Tawang MLA Tsewang Dhondup; had taken off at 09:56 a.m on 30th April from Tawang Helipad. The chopper was scheduled to land at the State capital Itanagar at 11:30 a.m. However, hardly 20 minutes after its take-off, the chopper went missing and lost communication with the base. It was last known to fly over Sela Pass, a narrow pass in the mountainous regions of Arunachal Pradesh, at an elevation of 13700 feet above mean sea level.

Immediately after brushing off the false confirmations claimed by various sources including retired Army General Governor J.J Singh and C.M office that the chopper had landed safely in a place called Daporijo, a joint operation by the Army, Air Force and State Police along with groups of local people was initiated in search of the missing chopper and its 5 boarders. After 5 long days of rigorous search, Dorjee Khandu and his fellow-boarders were found dead in Luguthang, near China border, in the midst of the remnants of the blasted helicopter.

Mr. Dorjee Khandu was born on the 3rd of March, 1955 in the Monpa Buddhist Tribe in Gyangkhar village in Tawang district of Arunachal Pradesh to Leki Dorjee. He dropped out of school when he was in the 8th standard. He had started his career as early as in 1971, as a core member of the Indian Army Intelligence. He served there for more than 7 years. His commendable service was well acknowledged and had won him a gold medal for his intelligence service in the Bangladesh war. He got engaged in social activities for the village people of Tawang District and looked after their welfare up to the year 1980 bringing about great changes in the social and economic conditions of the people. In 1980, Khandu was elected uncontested as the first Anchal Samitee Member and continued in the same position till 1983.  In 1982 with his initiative, the Cultural and Co–operative societies were established in Tawang and he led the cultural troupe representing Arunachal Pradesh in Delhi for ASIAD (The Asian Games) which won a silver medal for its excellent performance.

Khandu began his political career as a grass-root level leader when he was elected unopposed as the District Vice-President of the West Kameng Zilla Parishad in 1983. Again, a major turning point came when he was elected uncontested to the First Legislative Assembly of the State of Arunachal Pradesh in March, 1990 from Thingbu – Mukto constituency. Thereafter, Khandu was unstoppable. From 1990 to 2009, he was elected to the Assembly five times, thrice unopposed. He also served as the Cabinet Minister for Animal Husbandry & Veterinary, Dairy Development from 21 September, 1996, as Minister for Mines, Relief & Rehabilitation from 2002 and again as Minister for Relief & Rehabilitation and Disaster Management from 2003.

Dorjee Khandu became the Chief Minister of Arunachal Pradesh on 9th April, 2007 replacing Gegong Apang, who had ruled the state for a total of 23 years. On 25 October 2009, he was again sworn in as the Chief Minister of the state. Khandu was the only Chief Minister of Arunachal Pradesh to have served more than 1 term in office as Chief Minister. His service to the community made him an immensely popular leader. His immediate success to secure a loan of Rs. 225 crores from PSU (Public sector Undertaking) power major NHPC (National Hydroelectric Power Corporation) and reopening the state-owned APEX Cooperative bank which had been lying defunct for two years after a major scam issue, brought great relief to many a depositors who were mostly poor locals. Khandu, during his rule, enthusiastically pursued developmental activities for the state, particularly for enhancing water supply, electricity, communication facility, agriculture, livestock development, setting up schools and hospitals at the remotest places of the state.

Sufi singer Kailash Kher also happened to be in Arunachal Pradesh on the 30th of April. Kailash Kher, along with his band had gone to perform in Arunachal Pradesh and was offered to capture the same chopper to travel back from Tawang; the same chopper that had vanished into thin air a few minutes later. Kailash said, “This was the first time our band had gone to perform to such a remote corner of the country. And we could feel that the people loved every bit of it. I think it is somewhere the good will of these people and our fans and God’s love that saved us from taking that fateful helicopter, which was then boarded by the late Chief Minister of Arunachal  Pradesh.” Though one of his band members Paresh Kamat had insisted to take the chopper so as to save time, Kailash Kher found his instincts telling him to take the longer route by road and enjoy the beautiful scenery of the region. “My instincts saved me. We could not believe our own fate.” He said while talking to the team of Fried Eye, after having heard about the missing chopper.

Dorjee Khandu’s untimely death was naturally a matter of great shock for his people who had idolized him so much as well as for the entire region. Khandu, also lovingly called the Laughing Buddha by his friends, had been a ray of hope for the people of the state. He played a key role in the development of Arunachal Pradesh that had been a small tucked away area of the North-East all these years and has now turned into a major tourist spot and a hub centre of business and trade. The day when his body was being brought in to the state capital, all the business community kept their shutters closed throughout the day to mourn his death. Among other Union and State Ministers, Prime Minister Manmohan Singh and Congress President Sonia Gandhi also visited Itanagar to pay their homage to the late Chief Minister. The last rituals of Mr. Khandu were observed according to the traditions of the Monpa tribe along with State honors on the 10th of May, 2011 in his native villages in the presence of about 10000 people including his family of four wives and six children. Mr. Jarbom Gamlin, the newly sworn in Chief Minister of Arunachal Pradesh along with other cabinet ministers, legislators and senior officers attended the cremation to pay their last tributes to Mr. Khandu. In the words of Gamlin, “It is the saddest day of our state as we gather here today to pay our respectful adieu to our beloved leader. He was an ocean of compassion, pure, virtuous, a visionary and a pioneer of modern Arunachal Pradesh. It is very hard to believe that a man of his stature, who had been widely loved by the people in the state as well as the entire nation, is no more among us.”

Needless to say, Mr. Dorjee Khandu was a good politician and a man who kept his promises.  He was without doubt a very good politician, who put his words into action and transformed the political and economic scenario of Arunachal Pradesh during his reign as Chief Minister, thus doing full justice to his position and indeed, was a very good human being. His death is a terrible loss to the region as well as to the entire country. He, who had during his lifetime transformed the fortune of a State and its people, had to succumb to his own destiny at the end, disappearing into the clouds on that fateful day.

COME AS YOU ARE