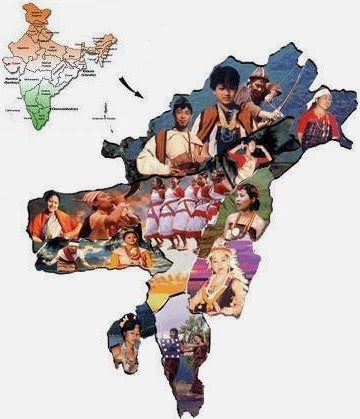 Letter to the Editor: We too are Indians

[The recent Nido Tania incident has created quite a stir in the country, especially among the people of the North East. This letter to the editor is the reflection of one such person’s honest feelings when people from the North East fall victim to such cases in mainland India. While, we understand that generalization is not the best way to look at this matter, this letter also provides enough food for thought to us, as well as to every citizen of India.]

A few days back a senior friend of my mine whom I befriended during my Internship with Indian Express at Pune dropped me a message on Facebook. The message read “How long will it take to travel all the seven states of North-East? Or should it be one state at a time?”

Since I had always been telling my friend to visit this beautiful corner of India, the enquiry actually made me happy and I tried my best to answer all her queries to the best of my ability.

However from her query one thing was very clear that like most other fellow Indians outside North East she too did not have even the slightest knowledge about this part of her own country, apart from maybe extremists, tea and the one-horned Rhino. Now after I read the message what I was wondering was that whether I am lucky to be born in this unknown part of India where we at least know  that there are 28 states in India, Chattisgarh and Jharkhand  are two different states formed out of Bihar and Madhya Pradesh , Kathakali is the dance form of Kerela and not Tamil Nadu , Garba is the traditional dance of Gujrat and Dhokla, is their staple food, we don’t need any Ekta Kapoor serial to let was know it  or are my fellow Indians outside the region  are unlucky to have not known that these  seven states cover an area of 255,511 km2,  which is about 7 percent of India’s total area or they have a population of more than  44.98 million, which is about  3.7 percent of India’s total population or  one brother State Sikkim is also being added to these seven sisters state or  Paresh Baruah and Parag Das are two different persons, or the  Principal Scientist of the Chandrayan Mission  Dr. Jatindra Nath Goswami, is from Assam or Imphal is the Capital of Manipur and not Nagaland. ????

At a time when the incident of Nido Tania, a young student from Arunachal being killed in Delhi by miscreants is hitting the headlines, such inquiries from my friend once again is making me rethink the fact that what is that sets us apart from the rest of India, in spite of being born in this country and that too to parents who are also very much citizens of this country.  Don’t we cheer when India wins the Cricket world cup in spite of the fact that the selectors have never tried to look in to this part of the region or don’t we celebrate Independence Day in spite of still being dependent on the mercy of Delhi?  Is it our fault that all the top notch IIT’s, IIM’s , and other institute of higher learning are being established outside the North-East and we have to move miles away to fulfill our aims and dreams only to be treated as an outside in our own country? Don’t we celebrate holi; what if my brothers at Arunachal Pradesh celebrate it as Sangken and instead of colour they celebrate it with only water? Many foreigners come and stay at Majuli-the largest river island in the world but sadly how many of my fellows Indians outside North-East atleast know about these priced possessions of their own country? Or for that matter how many of the so called Indians outside North east know that Asia’s cleanest village “Mawlynnong” situated in the picturesque state of Meghalaya, is also in their own country India? They talk about North-East being the land of terrorism, but didn’t incidents like 26/11 happen in Mumbai? You might treat us as foreigners but we have helped a fellow Indian to become the Prime Minister by letting him contest the Elections from the so called foreign land of Assam; and let’s not talk about the other Singh!!!.

They question about our looks and make fun of our food habits but we know our history and geography well and that’s why we never question a Punjabi brother why they keep long hair or wear turban or why a south Indian friend relishes the food made of coconut oil instead of Mustard oil or for that matter why is their skin color dark.?  They might have not studied about North-East in their text books but we have very well read about India. We very well know about Shivaji as much as we know about Sankardev. They might not know about Ranghar or Karenghar or Kangla Fort or Ujjayanta Palace but we very well know about Golkonda Fort in Andhra Pradesh or Dabhoi in Gujrat. They might not know what an Assamese Til Pitha is but we very well know about Pulan Pori or Dal Bati. They might have their own misconception regarding Bihu but we know very well what Lavani is. They might have not heard of The Li-Haroba Festival of Manipur but we are very much aware of Onam and Pongal.  We know all this and much more about India because we are Indians. So, before questioning us about our nationality, about our Identity, it’s them who should question their own knowledge about their own country, its people and places.