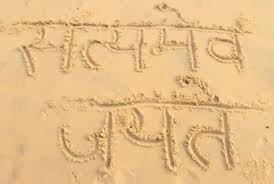 It’s 15th Feb today. There’s love in the air and young and old alike are in probability of having a massive hangover of excessive romance of the previous week, but Satyameva Jayate ! Yes truth alone prevails.

Now what kind of opening was that? Was it the leftover heady mix of romance and cocktails speaking, you must be wondering. But no, I am perfectly sane and sober by my standards and was just pursuing a chain of thought that goes somewhat like this –

Because it suddenly, yeah suddenly hit me that it is not true. The concept of Satya Meva Jayate doesn’t prevail, because it simply cannot prevail, as the concept of truth itself is doubtful.

Before I go into a spiritual plane regarding that concept, I would like to state though it seems very inspirational, educational and a mantra for a …spiritual elevation, it really could not find a strong foothold in society as it was not a very practical concept. The concept remained what it was – just a theological or spiritual concept and could not evolve into a practice.

The primary reason that humans could not adhere to the teaching is the fear of repercussion of saying the truth. – the fear of punishment! Everybody fears punishment. Not everyone is lucky enough to have a father as that of MK Gandhi to judge you and forgive you.  Satyameva Jayate’s principle hits the first road block because of another noble concept of crime and punishment. Only one of them can prevail at a time. To err is human. Humans will err by chance, be default, by mistake but owning up, confessing becomes difficult as the retributions are strong. Not everybody can afford a punishment even if it was minimal, especially if it was just circumstantial or on the spur of the moment, mindless whim. Neither is forgiveness easy. A wife may forgive a husband for a crime of adultery , a  father may forgive theft, but how can one forgive hit and run cases, how can a school forgive extreme indiscipline, and I could go on with worse instances.  Punishment is necessary for justice to prevail, for the truth to prevail, for a healthy society but again that same punishment and justice does not allow the truth to prevail.

Now if that was about the confession part of the truth, we have another more serious aspect of the truth to deal with and that is the perspective.

Yes, the perspective is the most difficult part as perspectives differ among countries, sections and even individuals. Perspectives are what wars are all about and it is then where you lose the notion of truth. Amish Tripathi has projected it beautifully in his trilogy, The Shiva series. In a war every side thinks it to be the right side, the truth and both have their justifications which almost make it seem that both sides maybe right and true in their own way… And so the truth becomes distorted. Which of the two ‘truths’ will triumph then? It is power that prevails in a conflict of ideology and less often the truth or probably we never know what triumphs in the end.

In either case, one cannot convincingly state that the Truth prevailed! Because as I have stated before that the concept of truth itself is doubtful.

As an idealist I did try to practice ‘truth’ very much but after some dreadful results I gave up. Not without any reason is Diplomacy a popular and an important practice. I broke many hearts and earned very less accolades for my truthful approaches. A man maybe bold enough to face consequences of his actions; he might have a transparent and clear view of life , but can such a man again speak the whole truth and hurt many men? I guess not! And so we slowly learn to veil the truth or dress it up. The truth becomes a blur. And so a child learns to veil a truth when he or she smiles innocently and says that it loves both its parents equally… We lie to a guest whom we don’t want to come over that we are out of station and so it goes… These are still minor lies, but what about those major ones where we lie to friends and partners about their capabilities, just so as to not hurt them? Aren’t we making them live a life of lie? Can you tell me which would be more sinful – to break their heart or make them live a lie? Difficult choice, right? And so the absolute Truth never prevails!

Letter to the Editor: We too are Indians