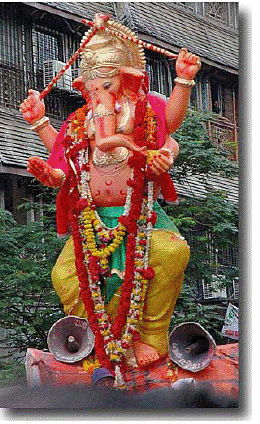 Come August and visitors to Mumbai will notice a very conspicuous change. The usually mechanical city suddenly transforms into a lady being decked up for an occasion. There’s talk about holidays and “modak”s and preparations for the biggest festival of the year, The Ganesh Chaturthi. The celebration that brings together every single person residing in the city, bowing in reverence to the Elephant God, celebrating his presence over the city. The city has just started coming to life. Celebrated as the birthday of the great son of Shiva and Parvati, the God is believed to bestow prosperity, wisdom and good fortune on his devotees during the festival. Ganapati, who is known to have twelve names in all, is considered to be one of the brightest Gods with a penchant for knowledge and as faith would have it, praying to the God during this festival will see the fulfilment of devotee’s wishes.

Lokmanya Tilak, the great freedom fighter, has been accredited with the transformation of the Ganesh Festival into a public event. Realizing that as long as the people would be caught up in internal differences, there would be no unity; Tilak started organizing public celebrations which brought together people from all religions, castes and strata of society. It was in this fertile atmosphere that the seeds of the great freedom struggle would eventually be sown.

Celebrated for 10 days starting on Shukla Chaturthi to Anant Chaturdashi, according to the Hindu calendar, the festival sees idols ranging from a few inches to over 25 feet. Local Ganapati committees pool in funds and build themes around the idol. Popular themes include current affairs or movie scenes built around machinery, gears and paper and cardboard with breath taking lighting effects. The themes attract visitors not only from across the city but from across the entire nation.

And to add to the festivities, Ganapati Bappa, as he is known lovingly to his devotees brings to the table fantastic sweets. How can the festivities be complete without a taste of the famous “Modak”, Ganapati’s favourite? Available in a whole lot of flavours, from the modern chocolate to the traditional coconut, the mouth watering delicacies flood the sweet shops and the households.

After enjoying a daily puja and abundant love and sweets, Ganapati Bappa is finally ready to leave for his heavenly abode. Depending upon the size of the idols and the love of the devotees, the idols are immersed after, 1 day, 5 days or 10 days. The festivities on the streets have to be seen to be believed as the beloved Elephant God marches to his abode in the Kailash.

As September approaches and the world economy continues to be unpredictable, this is the right time for one and all to fall in line and pray to the cleverest and the wisest of all Gods to help us humans tide over our issues in life. The joyous welcome for Ganapati can already be heard on the streets:

Of Rooms and Starry Nights by Lasya Shashimohan