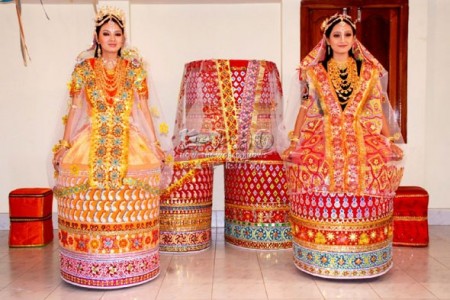 Wedding is a special day for all. It is the day when it is required of you to look your best. It is the day when you are supposed to feel the best. You will be the cynosure of all eyes and naturally you would want everything to be perfect or just like you had always dreamt of- the décor, the food, invites and of course the bridal wear.

To add some colours this winter and on the new year, we are bringing before you Fried Eye’s favourite five picks in bridal wear, chosen from all over the world.

Though it was seen that the evergreen white wedding gown, the reds from the orient and India were the most popular colours, but we did find some unique ones based on their traditional wear and this scored high as a criteria when we were looking around for our article

So coming up first not in any particular order

Yemen has both muslim and jewish population and their individual influencs can be seen in their traditional practices. 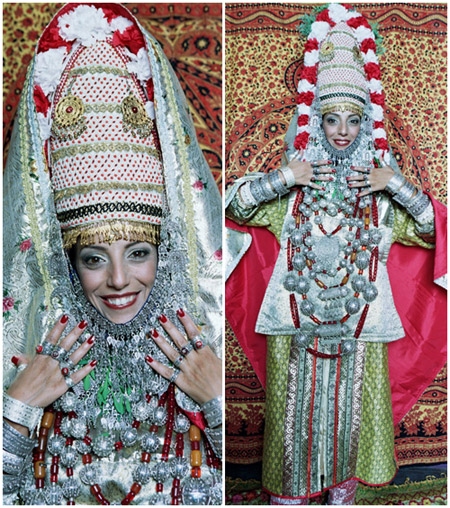 The Bridal outfit is almost similar for both Jewish and Muslim brides, however there are telltale  differences which a practised eye can easily detect. Though the golden outer coat is common for both of them, the pant legs however have a star motif made out of silver and red silk in case of the jewish bride.

The head gear is tall and triangular in shape and adorned with fresh flowers. In the sides, branches of basil  are placed to protect them from evil eye.

The bride is completely covered with elaborate jewellery which are examples of some fine silver work and that which announces that it indeed is her day. 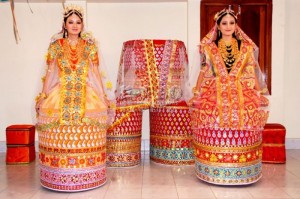 Potloi is the name of the manipuri bridal wear and has a unique puffed up appearance. It is bright red in colour adorned with fine embroidery and is quite unlike the other regional wedding dresses of India

This is also the dress worn for the famous manipuri raslila dance. However there is slight variation between the bridal and the dance costume.

The white wedding gown , the trademark of a traditional christian bride has captivated the imagination of almost all the females of the world and it has been incorporated in their own customs and traditions. We picked the Irish wedding gown because of its ethereal and exceeding beautiful quality 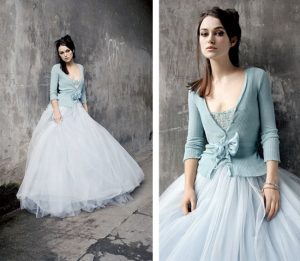 The Irish bride wears a blue wedding dress rather than white as per traditions. This color was a symbol of purity in ancient times hence was preferred before white came to be known as the  universal symbol for virginity. Not only did their gowns symbolise innocence and purity, but even their hair worn in braids interlaced and woven with pretty ribbons and lace lend them a virginal air.

Braided hair is said to be an ancient Irish symbol of feminine power and luck.

Instead of the veils, Irish brides usually prefer a wreath of wildflowers in their hair 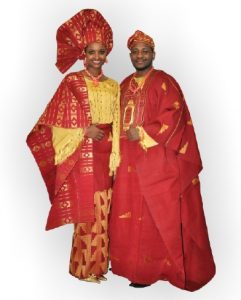 Next in line is the bridal dress from Africa. The african bubba or  the wedding dress is known.as, is a four piece attire with a top , skirt , shawl and headdress. The colours and symbols in the attire usually points towards the region from where they belong. 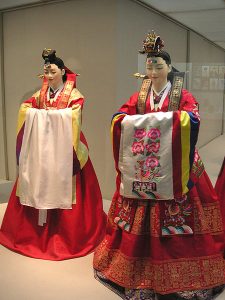 The Hwarok or the bridal dress of the Korean bride is a bright colouful attire  with simple lines and huge adorned sleeves , the vibrant colours differentiating it from their normal traditional dress hanbok. The crowns known as jokduri and hwagon compliment the gown to make it an imposing and grand costume.

Well these were our five wedding gowns that we chose as among the most unique and striking though we do not in any way demean the other dresses . A bridal attire is always special and be it from  Spain or from Armenia,  maybe a low priced or costing the moon, but there is something really inexplicable about it that makes it always eyecatchingly pretty.

A technology and A magic for your marriage