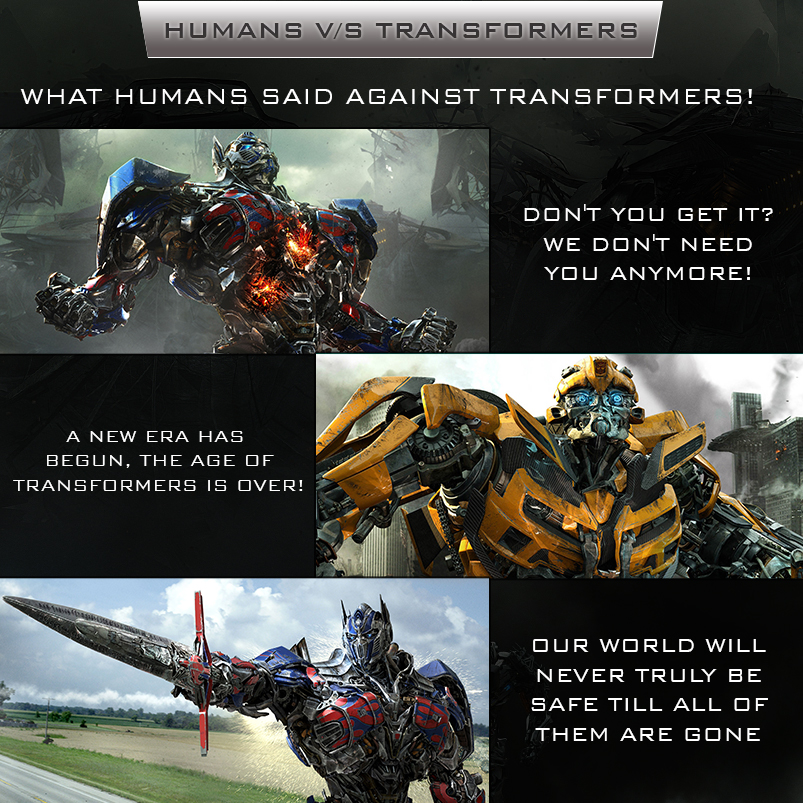 This is what some humans have to say. What is your take?

They’re causing way too much destruction – How many human lives will be lost in the senseless war between the Autobots and the Decepticons? Who is going to pay for all the damage to property and people?

Tech – They’ve got the best weapons around, our guns don’t even seem to scratch them. We need better tech! Or a kill switch, no really! We do.

They’re watching us. All the time. You could have a tiny decepticon in your pocket and you wouldn’t even know it. That’s the problem. They can see and hear everything! Imagine being unable to have any privacy!

They haven’t told us everything. There’s always another reason for the world to end. Every single time we think, we’re safe and nothing worse is out there we find a reason to have to defend ourselves again.

They haven’t they gotten rid of Justin Bieber. Think about it, a world without Bieber! Oh! and One Direction. I believe half of the reason why the Decepticons are always angry is they have Bieber on loop all the time at their base. They could take them and their war to some other planet, preferably desolate and without oxygen. With all their power it shouldn’t be that hard.

They’ve taken the fun out of driving/riding. You’re in your car driving down the road when suddenly *metallic clinking noise* the car morphs into a transformer and you’re sitting on a field by the side of the road with a steering wheel in your hand wondering what just happened. You’re also a hundred miles from the nearest town and it’s the middle of the day. This has to stop!

Your cat decides to pee on the home theater system. It transforms and goes berserk killing everything and everyone in the city. The transformers just don’t understand pets. What if it decides to place your poor cat on the moon for kicks? That’s not funny for a few folk! Transformers OUT!

They have a penchant for exploding. Imagine this, your toaster is a decepticon in hiding. Optimus Prime rips the roof off your house to blast him into the sky. You lose a toaster and a roof at the same damn time! Also, the toast gets burnt.

They don’t help us when we need it. The search for the Malaysia Airlines plane is still on, the mystery of the Bermuda Triangle remains and we don’t know how the bag of Cheetos always disappears from the kitchen if we have friends over. I’d want my toaster transformer to keep an eye on my stuff.