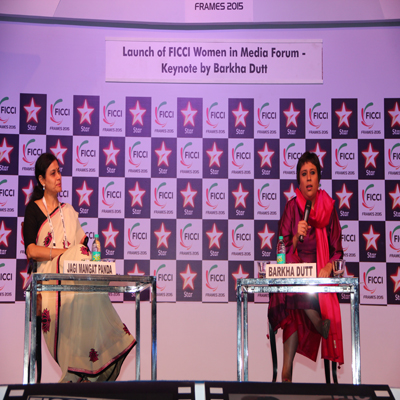 If you do well as a woman, be prepared to be hated: Barkha Dutt at FICCI 2015

The ‘FICCI Women in Media Forum’ was launched here today during FICCI FRAMES 2015. Keynote speaker Barkha Dutt, Consulting Editor, NDTV, held the audience spellbound as she described her journey as a successful media executive, now about to embark on her own entrepreneurial venture.

She began with an acknowledgement of her mother’s role as a media person three decades ago, in shaping her. She recounted how her mother, as a 19 year old, was refused a job as a reporter at the Hindustan Times. She was told there was no space for women, and when she insisted, was asked to report on flower shows in Delhi. But her mother persisted and went on to head the Investigative Bureau of the Hindustan Times. “When I reported on the Kargil war, many people thought I was the first woman, but that role belonged to my mother,” Barkha clarified. During the 1965 Indo-Pak war, when the senior Ms Dutt was denied an opportunity to go to the front, she took leave and reached there on her own. She sent her despatches to her paper, and the paper had no choice but to publish them. “Such strong role models make a difference in your life,” said Barkha. Barkha spoke of her own experience during the Kargil war. She too was denied permission initially but finally allowed after repeated pleading. But her travails did not end there. She had to deal with the Army. The Army tried to dissuade her from entering the “all male domain”, saying that there would be “complications” since there were no toilets for women. “This is war. I will do what the men do,” was her simple response. But she disclosed that today, at 43, she is not as uncomfortable with the gender tag as she was at 26, although she worked hard to resist it. She recalled how during the Kargil war, the journalists got close to a group of soldiers who saved them. When the soldiers left for battle, not knowing whether they would return, her male counterparts had no problem shedding tears during their goodbyes; but she was petrified of being called ‘girly’. “I would not even cry off camera. That was my first realisation that those who shrug off gender grapple with it in subliminal ways.”

“But we can’t hide from gender anymore.” What Anushka Sharma shared with her a few days ago was a case in point. The actor informed her that even today, a young man is paid much more in the film industry than established women. This is ironic during a year in cinema that was the year of women. “We also have ourselves to blame, we are uncomfortable to ask for more,” felt Barkha. Citing a recent UN study on depiction of women in the film industry, she informed the house that India did very well in sexualising women on screen. “How can it be that a woman can only be either a Tulsi with sindoor in her maang or an item number?” she argued.

Today, only nine per cent of film directors are women, and 15 per cent are producers. “If you do well as a woman, be prepared to be hated. You will be scrutinised for every word that comes out of your mouth, even for your weight.” She ended by voicing dismay over how even trained, brilliant women like Indira Nooyi are expected to fulfil the conventional role of a wife and mother at home. “Unless we push men into equal parenting, equal householding, we will not be able to rise.”

Earlier, Ms Jagi Mangat Panda of FICCI welcomed the gathering and described the ‘FICCI Women in Media Forum’ as another milestone for FICCI FRAMES. “Media is the most progressive business, a tool for gender sensitisation.”  However, she felt that media today is still as gender insensitive as any other sector. She called for close examination of the depiction of women in TV. The Forum will be a platform for exchange of knowledge and ideas between women in media both nationally and internationally. It will aim to represent women to relevant policy makers on issues pertaining to employment terms and practices in the media and entertainment sector.