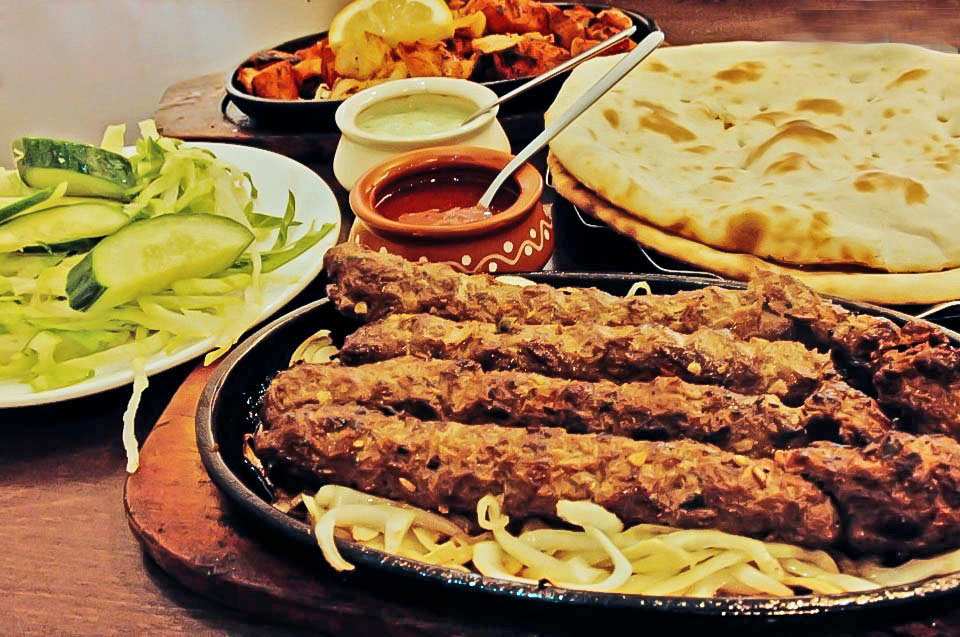 Kebabs and an Ode to Chacha Jaan

Ever since I was young, the passage to adult hood was baptism by meat cooked on wooden logs, popularly called Nyama Choma inKenya. Nyama means 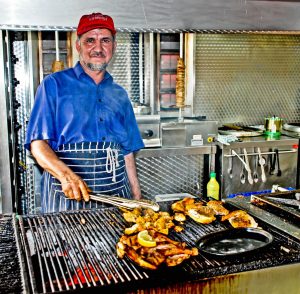 meat and Choma – charbroiled. This carnivorous trait has always led me to find best of places that sell barbequed meat. As it happened, Saturday mornings, I go to town for spot of street photography. On my rounds I discovered a new Kebab joint called Kebabish had opened in Town. I walked in and discovered it was owned by Punjabi Muslim and he had a chef who hailed fromKashmir. I enjoyed the Kebabs and the chef came over several times to ask me whether I had enjoyed his fare. We had cursory chit chat and I found him to be very nice gentleman.

Thereafter, this became my regular saturday mid-morning snack favourite joint. The chef was an older gentleman and naturally with due deference to his age, all the waiters addressed him endearingly as “ Chacha Jaan” – dearest uncle. I too started addressing him with this salutation. I found out that he was a ship’s cook and jumped the ship when the liner had docked at Liverpool. From there he made his way to Birmingham working in restaurants until he was head hunted by the owner in my town. On Saturday mid mornings there are not many customers in the Café. So he would come over and site with me. At outset, he told me that though we belonged to different religious persuasions, both of us emanated from the same stock. It was the politicians who had kept us apart and will continue to do so. Basically, he hailed from a poor family, earned reasonable salary but very rich at heart.

He had left his family back in Kashmir and their dependence was on his remittance. He worked hard from 10.00 am in the morning until well past midnight. Pubs close around 1 am in UK, and most people fortified by alcohol come out from pubs and head straight to Kebab joints. One busy night he worked quite late. If I missed any Saturday, he would remonstrate with me for not bothering to come over to see his chacha jaan. 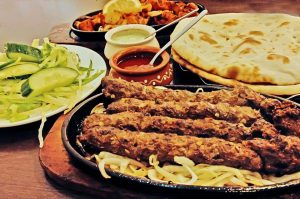 Once I complained that the Kebabs were too thin and he vowed that in future only he alone will make Kebabs for me. Thereafter, I got best Kebabs, nice thick and juicy on bed of fried onions. He showed me how to make Kebabs, use best of lamb mince meat, kneed it with finely chopped onions, garlic, ginger and spices. Let the kneaded meat stand for half an hour for it to self marinate. Putting the meat on skewers is an art in itself. Skewers must stand in ice cold water, fat in the meat freezes and clings to metal. Make a meat ball and pierce it with skewer, genteelly start pressing the meet around the metal spike in Kebab shape. Next rub hands in oil and run over the Shish Kebab. When the skewer is placed on fire, the oil seals the meat. Quick rotation ensures that Shish Kebab is sealed evenly. It must not be over cooked as it dries out and is not edible. A good kebab should retain its stock protected by outer sealed cooking. He would sometimes let me have a go at cooking my own Kebabs. He would taste it and provide a constructive critique.

Unlike other customers, I did not bother to give my order to waiters. I would pop my head around the café door – shout out – Chacha Jaan prepare the usual for me. I would pop over to the Chinese supermarket to do shopping. I discovered they sold tamarind boxed pods. I would buy one for myself and one for Chacha jaan.

Kebabish soon became very popular and was also frequented by Eastern European Migrants. Erstwhile entrepreneur owner also hired one Albanian waitress who brought in lot of clients. It was always fun to watch her explain the menu to Indians and Pakistanis. One the scene arrived, an attractive mother of two daughters as a waitress. She was called Gulnar and spoke beautiful Urdu. She was from Mumbai. Her husband also worked at Kebabish. She was employed to cater for increased clientele.

One day, I called at the café and was in bit of despondent mood. It was Rakhi day, an auspicious day when sisters tie a band round brothers wrists as a token of love. My twin sister was miles away from me in Kenya and I remembered this day of family celebration and missed her. Gulnar, sensed my mood and came joined me at the table accompanied by Chacha Jaan. To my surprise, both knew about the Rakhi day. Chacha jaan said to me why you are so despondent when your sister Gulanar is here. She produced a ribbon from some where and tied to my right hand wrist. We were all very emotional and from now onwards she was my surrogate sister. We celebrated with a big feast of Mixed platter consisting of Kebabs, Chicken Tikka, Massala Lamb chops and mutton pieces. All was downed with Mango lassi.

Now I was part of family – I looked forward to meeting them on Saturdays and enjoy a plate of Kebabs. During Ramadan, I was invited to opening of fast 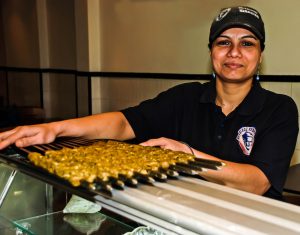 feast in the evenings at the café. As both had to work during the fast period. Evening meal was sumptuous and consisted of many dishes, fruits, dry fruits and assortment of nuts. Mondays, Chacha Jaan had a day off and he would invite me to his “adda” a sort of bachelor pad where other migrants living in the house would cook a meal. Gulnar also invited me to her house and I took the family for outings and drives. This relationship continued for seven years. Gulnar returned to Mumbai and I went to drop her and the kids now my surrogate nephews and nieces at Heathrow airport, London. Parting was very emotional and we remain in touch. She said – keep the apples and plums for me until I return. I have two apple trees and plum trees in my back garden. During the harvest season, I would collect large bags for both Chacha Jaan and Gulnar. Often give them bags full of vegetables harvested from my small holding.

Both came to accept my penchant for food photography. I always took pictures of Kebabs, mixed grills and dishes on offer at this café. Chacha jaan asked me to take his photograph. He was really chuffed when he saw his portrait. I had made several copies for him which he sent toKashmir. It gives me great satisfaction that a photograph taken by me is viewed by someone in Kashmir. I always took lot of photos of Gulnar.

On three occasions, I invited my work colleagues for Kebab nights. Once we had a reunion with my students who I used to teach about six years ago. I introduced Chacha Jaan as my uncle to them. They found it hard to comprehend that we Indians attach importance and emotion to perfect strangers who we adopt as uncles. He used to make sure that the food was extra nice so that I don’t lose face amongst my colleagues.

Chacha jaan had started complaining of aches and pains which were not only age related but also due to the fact that he spent daily long hours standing on his feet. In May this year, I went to Belgium and Hollandto photograph Floariade and Keukenhof tulip and flower festivals. I was away for three weeks and during my absence Chacha jaans joints were steadily deteriorating. He had thrown in the towel and decided to return to Kashmir to retire. I understand that he desperately tried to contact me.  On my return, my first port of call was Kebabish – I was absolutely gutted that Chacha Jaan was no longer there and had gone back to Kashmir. It was emotionally devastating that I did not chance to say good bye to him. He came into my life for seven years and went out of my life without goodbye.

I do not have his contact address though the waiters promised to get it for me.  Kebabish will never be the same again who made Kebabs for me with such tender loving care. I would walk in, Chacha Jaan would come out from behind the hot griddle, shake hands and give a hug. Gulnar would come running over to me to greet me as a brother. Now both were out of my life though I remain in touch with her.

I miss him most – Chacha Jaan over seven years became my real uncle and many a time we would have long chats about families, politics and share jokes and laughter. Maybe one day I will meet him again. Meanwhile he left a big vacuum in my heart. I still visit Kebabish with fervent hope that someone has found out his address for me. All waiters know me well and try and emulate the types of Kebabs and Mixed grill Chacha jaan made for me.

Music, Food and the Rain