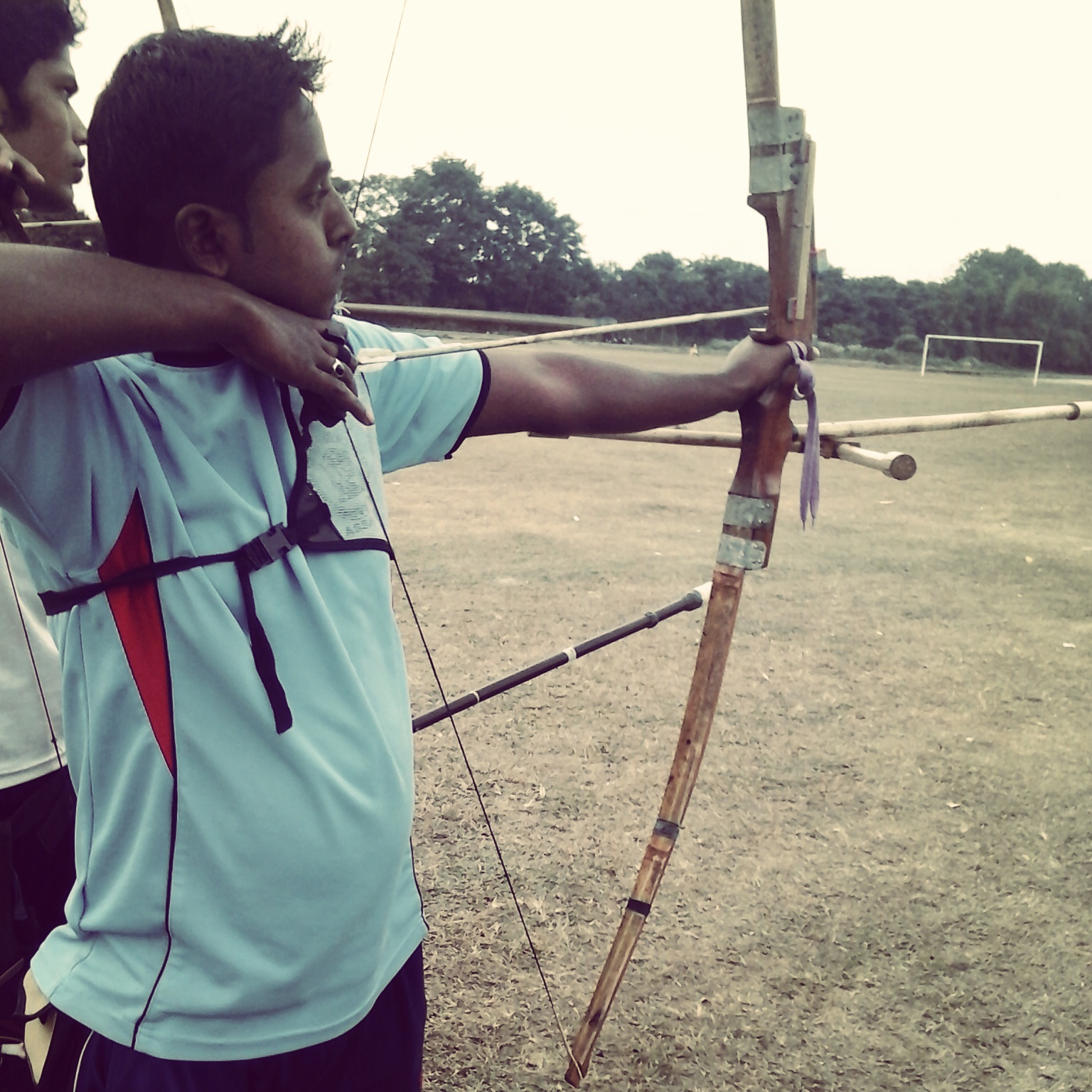 The current scenario of Archery in Tezpur

February 1, 2015 Off By Prasanta Mahanta

“Nothing clears a troubled mind better than shooting a bow”

The history of archery can be traced back to the ancient civilization, when bows and arrows were used as a weapon to hunt wild animals and used for warfare. The heroic efforts of the archers at the battlefield helped them gain triumph over several kingdoms. Studies suggest that pines served as the arrows in the ancient times, because they consisted of a long fore shaft and a flint point. According to the history of archery, bows were first developed in either early years of the Mesolithic age or the late Paleolithic age. The oldest bow used by archers was native to Denmark. Archeologists have discovered arrow shafts in many countries where archery was prevalent, which includes Egypt, Sweden and Denmark. Archery was also developed in Asia and other Islamic kingdoms. India’s tryst with modern day archery started in 1975, three years after the game was chosen as part of the Olympic discipline in the 1972 Munich Games. In 1973, the Archery Association of India (AAI) was established, which proved to be a milestone in the history of archery. The organization helped uplift the standard of archery from just being a primitive game to a sport with national and international recognition. The Archery Association of India has played a leading role in promoting archery in Asia, apart from its homeland.

This very indigenous game of our country, first established its roots in Tezpur with the inception of the Sonitpur Archery Club in 1994 and in its twenty years of illustrious service it has given us fifteen national players to boast of with six of them even clinching various medals. In an interview with the current secretary of the club Mr. Surojit Deka we were briefed on various aspects of the game and how they have managed to produce some amazing players with the least facilities for practice. The training sessions are carried out every Sunday evening from 3:30 to 5:30 at the Hazarapar Stadium. Mr. Deka says that the bows that they provide to the students for practicing cost from three lakh to fifteen lakh rupees and the organization doesn’t charge any fee from them. Moreover, when the students are sent to participate in the state and national level competitions, all their expenses are born by the club itself. However, what grieves Mr. Deka is the fact that not many youngsters show interest in this game: there are at present only forty students training under them. Secondly, another disheartening aspect to the scenario of archery in Tezpur is that most of the students who come to seek training belong to deprived families and as such they can’t afford to buy even the minimum requisite equipment for the game. Such barriers, however, are never allowed to deter the players’ ambitions and it is the result of such undaunted efforts by the association that players like Priyanka Sarmah,(daughter of a carpenter), Bacchenam Sarmah (son of a juice seller), Sikandar Rai (son of a sugarcane juice seller) and Plassey Das (daughter of a meat seller) have gone on to win medals even at the national level. Another venture that has been contributing towards uplifting the scenario of archery in Tezpur is the Archery Club of Tezpur University. It was formed on 11th June, 2014 as an autonomous organization within the university campus by Mr. Raju R. Singh, a national level archery player and also the former coach of the Indian archery team, with the intention of promoting the game among the students of the pioneer educational institution. There are at present fifteen students seeking training under Mr. Singh and four of them were sent to participate in the inter-institutional archery competition held at Kurukshetra University on the 3rd and 4th of November, 2014. In the course of a tête-à-tête with one of the novices of the club Sujit Muktan, he told me how within a span of seven months Mr. Singh has succeeded in incorporating the club as a part of the university’s ‘Games and Sports Section’. Sujit is all praise for his coach’s dedication towards his students; he says that it’s solely because of Mr. Singh’s efforts that the game of archery has found rejoinder among the students of the university.  However, this noble undertaking is yet to secure financial aids from the university, let alone from the government. Analogous to the plight of the Sonitpur Archery Club, the students seeking training under this club has to buy the necessary equipment on their own and this, according to Sujit, is one of the main reasons behind the low number of players in the institution. Nevertheless, Mr. Singh’s indomitable enthusiasm is sure to provide a much needed impetus to the game of archery in Tezpur in the coming days. Mr. Surojit Deka is of the opinion that Tezpur harbors a number of “talented” archery players but it is the lack of favorable practicing amenities and resources that has prevented them from making a mark in the international archery scenario. He seems to entertain prejudices against the Ministry of Sports for being completely indifferent to this magnificent game and appeals to the authorities concerned to help promote the game among the masses. Mr. Deka’s grievances appear completely justified considering the availability of poor facilities: there isn’t even any provision for artificial lighting to continue the practice after sunset. Furthermore, there are hardly three to four bows available with the club which makes it difficult for all the students to practice together and as a result of which they are not allotted equal practicing time. The scenario is evidently somewhat better in Tezpur University for the availability of convenient set-up and equipment helps the players to practice the game with more adequacy and perfection. However, on balance it seems the game of archery in Tezpur definitely needs more assistance and cognizance lest we don’t want the game to cease being played at all.