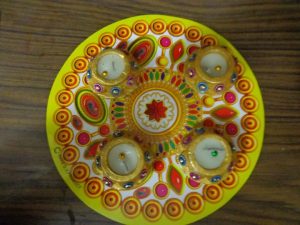 Oh common I know this for a fact that these ladies today are fearless. They are not scared anymore. They beat men bugging them with their purses and karate kicks they learn from the movies. The fight off abusing husbands in courts and take out much money from them. They go out during the nights and wear all kinds of clothes you can think of. Be it shorts and skirts to skin hugging strapless tops. They are not afraid of anyone. They have broken all social limitations you can think of.
You over hear one of your uncles saying this to other men, with much confidence and evidence. But what we see every year sometime in August is quite the opposite. These same ladies tie rakhis to their brothers just like your uncle and ask for their protection. They ensure that this brother- sister relationship never ends. They ensure that their brother is still around for them and also protects them.

I will invite ten kanyaas in my house this time during Navratras. I will seek blessings from them all. Why should I not, are they not divine. It will bring peace, joy and money in my house. I have also decided to give them a feast and gifts. They will all feel very happy.
You hear your neighbor aunt saying that she believes that these small cute girls represent our Hindu goddesses- Maa Saraswati, Maa Durga, Maa Laxmi and what not. But when you read the morning newspaper, instead of finding new government policies, we see how many of these little girls were raped at night or tortured during the day. How they were sold in the market for mere thousand rupees. How they are deprived from their right to go to school. And the worst, how they were killed in their mother’s womb.

My wife doesn’t need me. She makes her own money, and spends her own money in her own ways. She is financially independent. She handles the whole house and even the kids with so much ease and grace. Even my mother wasn’t that good. She knows how to drive and has her own credit cards, so I don’t even have to go with her for her shopping. I know for sure that even if I am not at home for a week, she will manage everything. She is a superwoman.
One man is discussing with others over a beer. But they don’t realize that the same woman eats nothing for hours and prays for the eternal lives of their husbands every year during karva chauth. This ensures that their husbands will be with them until they die, i.e. the wife will die before the husband does. The same woman seeks permission from her husband to go and meet her family or just hang around with her friends.

I love my parents. They are always telling stories of fairies and Santa Claus to my children at night. Their experiences and mistakes are so much of value to me. I learn so much from them. They are so wise and loving and caring. I wish they always remain with me and help me forever.
These same kids throw out these same parents to streets. They are forced to leave from the home, they built themselves with their own money and dreams, by their own children .Then they live their remaining lives (if they are able to) in a cranky old age home full of guilt and remorse.

Nothing can ever happen of India. It will remain the land of snake charmers and mystics. The difference is that earlier it was the British and now there are corrupt politicians and their duplicity. India will never become anything. It will forever stay like this.
The not-so-proud Indians who say these words out of derision, fail to recognize the very fact that now days India is on top of everything. Be it the production of wheat and rice or the most educated young population who can be hired by MNCs. We have got our music maestro A.R. Rehman, with two Oscars; our master blaster Sachin Tendulkar, with hundred hundreds; our evergreen actor Amitabh Bachan, with over 175 films to his credit; I can go on but I am afraid I will run out of time. yes, it has its fault but then which country doesn’t? I don’t know when we will be able to overcome them but what i do know is that if we only sit and complain then nothing is going to change.
I wonder when these cultural paradoxes will come to an end, and we, the people, will be able to live our lives in peace.

Begin to be now what you want to be in the future. (smirk!)
An evening with Jahnu Baruah