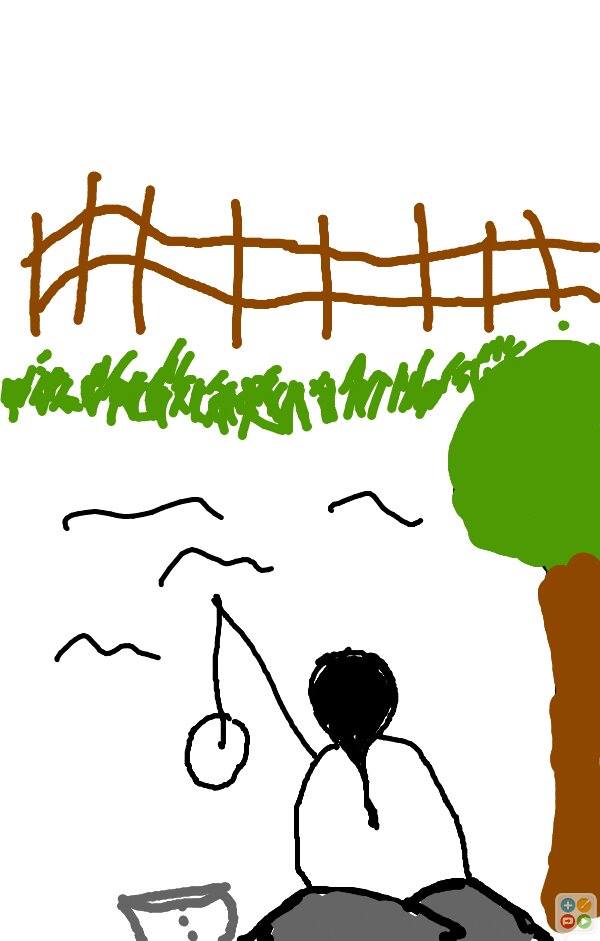 Ours is the oldest house on the lane. My grandfather built it when there were no roads but dirt paths and only fields of paddy where there are big houses now. When it rains very hard, our plot of land gets submerged under knee deep water. He built this house when he was rich, my grandfather, but for the past thirty years nobody has made any repairs to it. The house has sunk so low into the ground that the windows reach down to the floor. We are not rich anymore.

It’s difficult to stay inside the house when it rains heavily. Unless you want to spend all your time on top of a bed or a table. I used to like that once, when Maini still lived with us. We used to lie with our stomachs on the bed, watching our paper boats make their way across the room. Sometimes, we put insects into them, pretending they were sailors, making stories about their fate. But Maini left. So, I have a new pastime. I fish. I don’t have to go far. Just across the lane is an empty plot of land that gets flooded like ours. I have a tin can and a fishing rod that grandfather made for me before he lost use of his fingers. On days such as these, you’ll find me squatting, sometimes standing by the edge of the road waiting for a fish to bite, sometimes all day long. It’s easier because nobody cares what I do when it rains. My mother and my aunts are usually too busy piling things up high on tables and beds and chairs, wading through the greenish brown water with their mekhlas hitched up, trying to cook without everything floating away.

My grandfather gives me company when I’m fishing. He’s the one who gave me ten rupees to buy fish hooks. He can’t talk much. But we understand each other quite well. So, what I usually do before I start is I bring a table close to the window that faces the road and lift him onto it so he can see and hear me clearly. When I feel a tug on the line, I give him a thumbs up. He waits as breathlessly as I do. And if it’s a fish, I yell to let him know and he grins and claps his hands. If it isn’t, well, he smiles and nods his head as if to say next time..next time.. 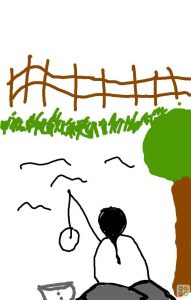 I am 7 years old. “Only,” ma adds whenever she needs to tell me I’m too young to understand ‘things’. Ma resembles a broken twig. It hurts to sleep in her arms at night because of her bones. I remember a time when she felt soft and comfortable, like a pillow, and I remember when she smelt nice. Like Pond’s powder. She still smells a little like that. But now there’s a stronger smell..especially at night. A smell that I cannot get used to. It makes me turn away from her in my sleep.

There are three rooms in our house and a kitchen. My parents and I sleep in one, my aunts, who are my father’s sisters, sleep in another. Maini and her family used to sleep in the third one. But now it’s empty. There’s a shed outside with a bed for my grandfather. Our toilet is outside too. My father used to tell us he’d build a new toilet attached to the house. But he never managed to save up money for it and he doesn’t mention it anymore.

My father drives a truck and many nights, he doesn’t come home. On nights such as these, my aunt Bina dresses up in clothes she never wears on other days. Shiny clothes. Clothes that show patches of skin. When Maini was here, we used to watch her as she coloured her lips and cheeks. We used to marvel at how different she looked with her powdered face. Beautiful, even. Ma would send us off to accompany her to the end of the lane where it’s very dark. Then a car would come and she would get in. We always stood a little away. She didn’t like whoever was in the car to think that she knew us or we, her.

One night, ma opened the door when she heard a rasping sound and found Bina sprawled outside. Ma and I lifted her in. It had felt strange to hold her. Her skin felt cold and wet. She looked like a doll whose clothes had been angrily ripped away, whose arms had been twisted out of shape. A doll that had been painted red to look like blood.

The police came the next afternoon and took Bina, her hands bound with rope. Ma said, “Be careful. She is hurt.” to the police women. But I don’t think they heard her. Her voice was too small. They didn’t even stop when Bina’s slipper fell away. When they had gone, I went back and brought the slipper home because she might want it when she came back. Ma said she wasn’t coming back. I asked her why. She said I wouldn’t understand.

I have another aunt, Bonti, who lives with us too. She is the one who looks after my grandfather, puts ointment on the abscesses on his scalp, cleans his blood coloured vomit off the floor. She rushes around the house doing one thing after the other. She is the only one among the adults who does not nap in the afternoon. She makes flower patterns on cloth or knits woollens then. She is never still. I like Bonti. She never smiles and talks very less. But she never gets angry either. Except for when Maini or I happen to stand where she wants to sweep and other times when we slow down her work. Once, Maini came from school and dribbled melted ice candy onto the floor that Bonti had just finished cleaning. She flew into a rage and threw a candle-stand at her. It barely touched her body, but Maini screamed anyway and her mother came rushing in from the other room, shrieking at Bonti, calling her a flat-chested, pockmarked dwarf whose husband couldn’t stand her beyond a night. I hated Maini then for causing her mother to say such things. Still, Maini’s mother wasn’t wrong. Bonti was ugly. But I didn’t know that she had had a husband. I asked ma if it was true, if Bonti had a husband who left because she was ugly. Ma didn’t answer but gave me money to buy some coloured embroidery thread for her. A gift, she said, smiling.

They took Maini away a year ago, her parents. The trouble started when uncle took up a job as a night watchman and my father decided to drive an auto instead of trucks. One night, when I went out to go to the toilet, I saw my father and Maini’s mother pressed against the wall of the shed, their backs to me. I went back inside and lay down again, trying hard to go back to sleep and ignore my throbbing bladder. A week later, Maini and I came back from school and saw ma, her hair open, her chador on the floor, brandishing a dau at Maini’s mother who was cowering in a corner, begging ma to listen to her, to not kill her. Bonti was trying to hold ma back and grandfather was crouched on the floor, whimpering, with his head in his hands. The dau fell from her hands when ma saw us. And she wailed. She held on to me and wailed. They left that night, Maini, her mother and her father. I have not seen her since.

This time the rains were heavy. Days of rain and very little sun. My grandfather caught a chill when his door came undone and the rain lashed his bed all night. He lay like that, wet and shivering, until my aunt found him in the morning. He passed away two days later. Those were good days for fishing. I caught lots of small fish and two big ones, almost the size of my palm. But I had to let them go because ma says we cannot eat fish for a year. I am going to ask my father when he comes back. He hasn’t been home in a while now. It doesn’t matter, ma says, as she gets ready to go out like aunt Bina used to. We can live without him. I don’t have to accompany ma to the end of the lane though. There’s a streetlight there now.