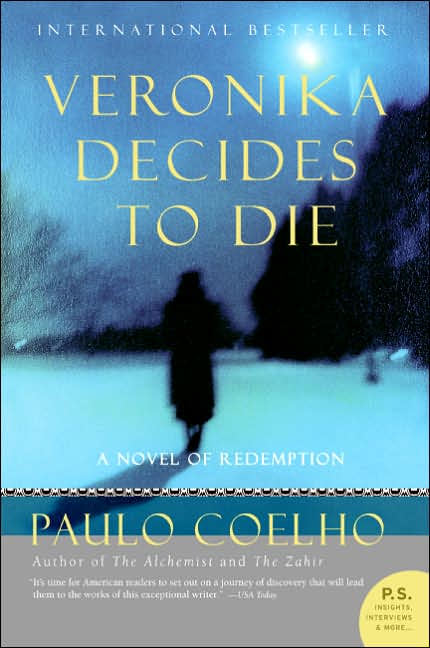 Veronika Decides To Die- A book review by Dhritishna Kalita

In Veronika decides to Die, the extremely masterful Paulo Coelho does what he is best at:  forcing us to ponder upon things we all know, and making us see them in a whole new light. 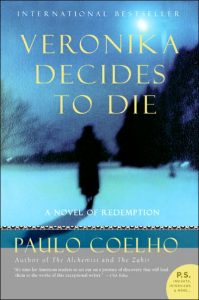 The fundamental question that Coelho puts forth is on what madness actually is. We all seem to have perverted ideas on what madness is, but Coelho’s book provides the simple answer: Madness is creating our own world and choosing to live in it, without concern about other things that do not matter. Madness is living in a separate world that you create yourself, a world others consider ‘different’. That, of course, puts Einstein, Columbus, even Edmund Hillary and the Beetles on the list of madmen. To put it bluntly, in the words of one of the characters, ‘And all of us, in one way or another, are mad.’

The narrative begins with Veronika, an attractive 24-year old Slovene musing on her life just after she swallows sleeping pills in an attempt to commit suicide. The reasoning she gives herself for this drastic act was life was the same for her every day; lack of major emotional upheavals had become mundane for her. The reasoning she leaves behind for others is that it was extremely saddening for her that an ignorant French journalist had begun an article with the rather disconcerting words: ‘Where is Slovenia?’

Veronika ends up in the Villete, the infamous Slovenian mental asylum. She meets fellow patients Zedka, who is suffering from chronic depression, Eduard the schizophrenic, and Mari, a lawyer plagued by panic attacks. She soon learns that the intake of a very heavy dosage of sleeping tablets had irreparably damaged her heart – and death is inevitable. Veronika ingests this information with no particular emotion and begins counting moments when she would finally die. In the course of her stay, she develops a relationship with Zedka – not friendship, as the author notes – and concludes that her words have deep philosophy embedded within them. She also bonds with Eduard; her piano-playing skills deeply pleasure the young schizophrenic. What suddenly stabs at Veronika is the realization that she has fallen in love with Eduard: primarily because once she is gone, he would be one who would not miss her. Love, hate, curiosity, sexual desires and the wish to live start clouding her. She finds her time at the Villete to be an emotionally enriching one.

Dr Igor- the doctor in charge of the asylum- has been portrayed as an ambitious psychiatrist, who works hard on his thesis which, he believes, will revolutionise the psychiatric world. He considers ‘Vitriol’ or Bitterness to be the poison responsible for madness. Bitterness, he believes, poisons a man in a way that he ceases to have the will to either live or to die. He gets a much-awaited chance to test his cure for ‘detoxification’ when Veronika arrives at the Villete. As the story unfolds, it is revealed at the end that Veronika has actually been cured of all damages to her physical being, and she is healthy as anyone could be. This fact had been hidden from her purposely by the doctor.  By means of a drug, he continued to induce in her the symptoms of heart damage in an attempt to eliminate Vitriol. The flushing away of the toxin was carried out thus: by flooding Veronika with the desire to live at the expense of the fear of imminent death. He achieves this seemingly impossible task by employing his belief (and the title of his thesis) ‘an awareness of death encourages us to live more intensely’. The twist in the tale comes when Veronika escapes the asylum with Eduard, without the knowledge that she is healthy and has long to live. Dr Igor finds out about her escape on the very morning when he plans to notify her about her health; yet he relishes the fact that Veronika, unaware that she is fine again, would live each day as a miracle.

In addition to the extremely thought-provoking narrative, we learn about mystical Sufi wisdom, the inhuman yet thriving practice of ‘Insulin shock’ treatment, comparisons between heroes and madmen, sexual preferences, and of course, the prevalence of mental diseases across countries. The book, in essence, questions the stereotypic ideas that we seem to have about psychiatric illnesses.

The book makes for an absorbing read. Anyone who wishes to delve deeper into his own being and is, at the same time, willing to let his thoughts run free would find this book to be an enriching experience. An international bestseller authored by the famed Paulo Coelho and translated from the Portuguese by Margaret Jull Costa, the book is just another feather in Coelho’s cap. The writer weaves a tale seemingly ordinary tale, but tells the story in a way that only Coelho can; he questions seemingly ordinary ideas in the way that only Coelho can. In a way, he forces the reader to look at things from another point of view, and the experience is definitely worthwhile.

And yes – I can confidently argue that the book has done its bit in making me consider ‘madness’ in a very different way. The ideas may seem too fantastic to be real at times, but a bit deeper reflection discards the very thought as narrow-minded. I’m sure that this book has affected many in the way it has made an impact on me: the next time someone rebukes me as ‘mad’, I won’t be flared up as I usually am – on the contrary, I’ll grin inwardly, realizing that there’s something I know that they do not.  The book got me thinking that to write about such things, the writer has to be, in the precise word, mad.

The Key- a book review