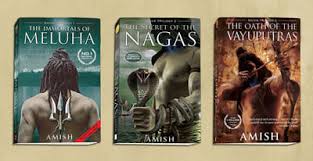 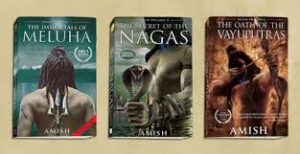 Shiva- The man whom legend turned into a God! -The concept was interesting!

The idea of a mythology being converted to a tale, enhanced and beautified for a mass appeal was interesting!

“Shit, what am I saying” (a sample of a dialogue from the first of the trilogy )-the language seemed interesting too , to many. It seemed to be a refreshing change from the archaic “thou cometh my Lord” , but personally I just could not digest a God, alright a legend , saying that, but that’s just a minor point in a sea of disputes.

Amish Tripathi, the author of the Shiva trilogy, namely The Immortals of Meluha, The Secret of the Nagas and The Oath of the Vayuputras  needs to be applauded for three things –

One- a brave attempt at mythology with descriptions of epic proportions, ahem! figuratively speaking.

Second, characterizations and research- He is completely in sync with what and how the readers would want their heroes and antiheroes to be and has amplified the heroic in each of the characters, including even the mundane ones. So we have Nandi , Veerbhadra, Ganesh, who seems like a well sketched combo of Clark Kent- Superman all rolled into one, visible as such at the same moment too . The research is extensive and barring aside a few minor jarring notes in the backdrop in the first, seems pretty much possible and precise in the latter two on first look.

Though the contemporary scientific terms interspersed here and there seems to stick out like a sore thumb, but still can be overlooked, though it’s anybody’s guess why a kingdom discussing telepathic signals, thermodynamics and nuclear fission is still depending on the slowest mode of transportations.

Thirdly – His farsightedness as far as the calculations of the far reaching effects and impact of the book. The trilogy is a success and has already bagged a movie deal and has been touted as India’s answer to LOTR. Not a surprise considering the vivid imagery that he has woven around the India of yore which I consider the best point in the trilogy as a matter of fact.

These were really laudable in terms of innovative attempts and creativity, but the originality ends there.

The story is set on the same Sati-Shiva legend with the backdrop of ‘somras’ and Meluha to heighten the curiosity or rather complicate things. We have theo- philosophical theories about the Nagas, Mahadevas and Vasudevas thrown in for added attraction and the never failing  ‘good versus evil war’ as the objective, the only notable and unique highpoint being the point when the author seems to debate on  what evil is but even that fizzles out by the third novel.

Impact wise, the first did a lovely job of piquing readers’ interest with its simple colloquial style and grand historical (though not flawless) descriptions and superb characterizations.

By the time, the third of the series was due; a huge hype had been created that reminded me of the Deathly Hallows days.

A cold bloodedly calculated massacre of an entire helpless ‘resigned to one’s fate’ city, (of which ninety percent of the population were innocent)  are not stuffs of which legends of God  are made, but rather they are stuffs which remind you of Hitler’s genocidal ambitions.

Egyptian Assassins; Vayuputras which has western links- any farfetched imaginary ideas could have been forgiven, but this? The God whom Amish’s legend turn into a man with petty notions of right and wrong is totally, wholly, absolutely unacceptable and this is where he fails miserably in my eyes.

So in the end, I end up back in square one, where I would rather believe in the God Shiva himself rather than an interesting cock and bull legend turning an exceptional man into a God who certainly did not behave like one, when it needed to !