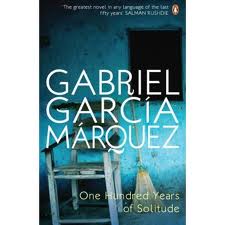 After a long time, I came across a book that was interesting and made me spend sleepless nights reading it and making me think over and over, the complexities involved while being told in a gracefully simple manner.

One Hundred Years of Solitude is a story of a small village Macondo founded by José Arcadio Buendía. It is the story of how Macondo grew from a small village of 20 adobe houses to a prosperous town until a windstorm wiped it away from the pages of history. It is the story of Buendías who prospered and perished along with the town. Although, the stories are independent of each other yet it is intermingled by their fate. There is no single protagonist. The family is the protagonist-the family, and the town.

It is unlike other stories where the story is clear cut and has a definite start or end, albeit it starts like any other story and as it moves forward, you notice that it moves in vicious circles repeating the events until it finds an end. Perhaps, that is where the genesis of the Gabriel García Márquez lies in. The story moves in a constant pace and keeps the reader constantly anticipating the future of the Buendía family. The names of the characters are repetitive and as characters repeat, time and again, the experiences of earlier generations repeat,representing the circular sense of time. Even a name a person is given at birth predetermines his or her life and manner of death, e.g., “the Aurelianos were all lucid, solitary figures, while the Jose Arcadios were energetic and enterprising, albeit tragic.”

It is one of the finest example of magical realism, and the author convincingly makes us believe in it. Macondo was a town full of magic and they were used as a metaphor to certain events. For example- the child that was born with a pig’s tail, the flying carpet, the divine aura of Remedios the Beauty, the miracle banana plantations…

Two of the most important events shaping the story of Macondo were the long civil war between the Liberals and Conservative government and the economic and political takeover of  Macondo by the banana firm. Had the war not happened, Macondo would live peacefully ever unware from the outside world.

The strike by field workers, and the military repression and massacre that García Márquez covers makes a bold statement about how history can be manipulated by people in power.The six lawyers in the novel argue that “the banana company did not have, never had had, and never would have any workers in its service,” and the court establishes “in solemn decrees that the workers did not exist.” Indeed, they truly did not.

Being the founder family of Macondo, the Buendías were very powerful but as we see them get helpless and powerless in front of outside cultures, we feel for the family. The author depicts the brutal truth with utmost grace and beauty.

The male characters are highly ambitious and sexually passionate, while the female characters are more practical and they run the family. However, both have a common flaw,they lack the ability to relate to the world outside of Macondo. They fall victim to their own constructions, plunging them into a harsh and long-lasting solitude.

Macondo is fated to end the moment one of its inhabitants deciphers Melquíades the Gypsy’s manuscripts regarding the town’s history. In a sense, however, Macondo does survive. One of the few who take the advice of the Catalan bookseller and leave the town before its destruction is Gabriel GarcíaMárquez, himself, who escapes with the complete works of Rabelais.

This self-referential ending, pointing to the world beyond Macondo from which Gabriel GarcíaMárquez is telling the story tells us that whatever life is to be lived in Latin America should not be the magical self-defeating experience of the Buendías, but rather an ever-widening life of learning and moving on; the development of an awareness of doing what each situation requires.

To end with, I would say that the story of the novel is multi layered and needs deeper understanding and hence it will make you keep coming back to read it again and again and ending with a different perspective of the story.