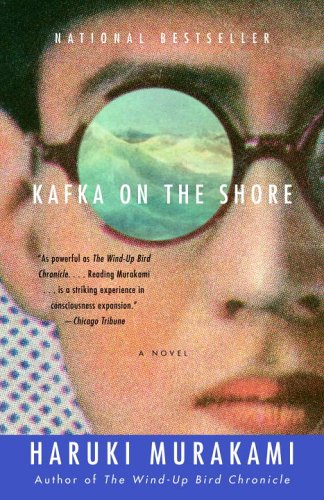 Kafka on the Shore – A book review !

This is very different kind of book, different in the sense that you don’t hate the book while you can’t actually like it for many reasons. In either case, you cannot put the book down as you want to know what the author is trying to say. For a Murakami fan, it is a disappointment while if you are a first time reader, you will like the beauty of the book.

However, I found that Murakami had messed up in this book. There are many loose ends in the story. The book starts with excerpts from FBI files during World War II about a possible UFO but that is all and there is no explanation regarding that leaving the readers to guess. It is simply told that a group of school kids who went to a neighbouring mountain to collect mushrooms suddenly go unconscious.

Kafka Tamura (not his real name, neither it is revealed in the book) who is a runaway and his father who is well known sculptor who makes flutes out of souls of cats by chopping their heads with clinical precision. Nakata who is now 60 was one of the kids and very sharp before the UFO incident is now dumb after the incident and leaves with a Governor’s stipend. However, he can talk with cats and he also works part-time as a tracker of lost cats. The story is how the lives of these two person intersect. However, there are few questions unanswered – Was Kafka really cursed by his father? If yes, then what was the reason? Was Miss Saeki, really Kafka’s mother? Miss Saeki replies to the question as “You already know the answer” which is a very suggestive and diplomatic reply which can go either way. Did Kafka actually murder his father through dream using Nakata’s body as a medium? Why was the character of Sakura introduced? Was she really Kafka’s sister and he actually rape her through dream? Was the strange object in Hoshino’s room a reincarnation of Kafka’s father? There are many such questions which are left unanswered in the book and totally left to the imagination of the reader.

There were other moments also where Murakami was weak as for example when he introduced characters like Johny Walker and Colonel Sanders which was very funny and could be avoided as it diluted the story. The characters in this book are also over mature. The characters Kafka (15) and Oshima (19) seemed to be middle aged man trapped in young bodies.

Despite all the flaws, there is something in the book which plays with imagination of the readers making them dream while reading and perhaps that was Murakami was trying to do. Considering his reputation, he could have been better. If you have read his previous works, you would find many similarities of his earlier works.