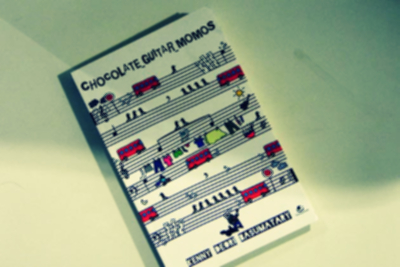 I started Chocolate, Guitar, Momos with a little apprehension in my mind. Thought, it would be like any other writer trying to be Chetan Bhagat. But to my utter disbelief, the book not only provided me with a sense of  good read but has also left me spellbound . A book so simple and yet so compelling. Its not a thriller,  but as you read , it takes you to a different world.

The best part of this book is not the writing style or the story. In fact  it is about the two undiluted character who are so true to their emotions.  While every guy reading this book would fall for Astha, the female protagonist right away, I however liked Joseph more. Infact any girl would instantly fall for him too. He wanted to be with his love, he lusted for her, yet his love was so pure.

Joseph is not naive.  He may sound foolish at times or throughout but he believes in doing everything to see his beloved happy, something actually rare in today’s times.  In this material world, when every girl wishes to be with rich man and the boy to be with someone pretty as angel, Joseph happily goes around helping his girlfriend fulfill her wishes. He is someone who believes in miracles and nothing discourages him away from that.

Astha is the most matured of all the characters. At times,selfish but she is still perfect. I would give the character special marks for the reason that she goes hunting for a wife for her father. That’s not something you could come across in real life. Not often at least! Astha  is the modern girl. A girl who is perfect to the edges. At times, she makes me feel  as if she has a mother’s heart. She understands her loved ones just like a mother does. She is the strongest for she holds herself strictly throughout.  She knew that she could never go weak. She lives with dignity and commands respect. Fate could have never frightened her.

The other characters like Utpal , Nadia, Tonmoy also stay with you. Utpal is the friend each of us have or should have in our life. Someone who would hang around and not judge you. Nadia and Tonmoy has smaller parts but they too have distinct flavours of their own. The result is you are left with a feeling of having met these characters at least somewhere at some part of your life.

The characters are urban and at all point of read you relate with them.  If you ever had a break-up then you surely must have behaved the way Jospeh  did. The solitary confinements, desire to listen to only sad songs,not willing to take care of one self  to mention a few. Every boy too must have once in his life smiled at a random girl in the bus stop or in a public bus with varied intentions but yes,  no one would have ever gone looking for  the “bus –stop” girl, at least not after 8 long years.

The book leaves you with a sense of willingness to meet someone like Astha ,someone like Joesph. The book is primarily about Astha. Joseph is just helping us understand how difficult it is for the family and friends to lose someone dear. I would recommend this book just for the characters, Astha and Joseph.

A music video made by the writer for the book –