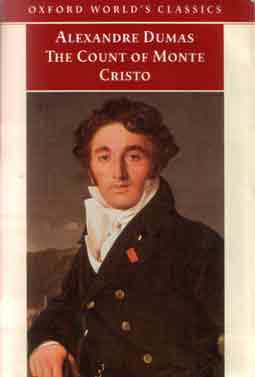 Love can be a very dangerous thing, but the lust for revenge is by far the most dangerous thing in this deceitful world.That is the adage that the classic book “The Count of Monte Cristo” by the master story teller, “Alexandre Dumas”, tells us. Described by many as an adventure novel, this book since its publication in the mid 19th century has enjoyed a status that is the envy of all writers. Made into a brilliant Hollywood movie, this novel by Dumas stands out as a very well crafted human document, alongside his more famous work, “The Three Musketeers”.

The book tells us the story of the tragedy and then the triumph of its protagonist, Edmond Dantes. Dantes, a captain of a ship was trashed into brutality by his jealous shipmate and the lover of his fiancée with the false accusation of being guilty of treason. Without as much as a fair trial, when Dantes is thrown into a desolate French prison, he breaks down and sees life as a drag with nothing to do. Fortunately for him, he meets in jail an elderly man who teaches him all that he knows, and at last when he dies, leaves behind with Dantes the secret to an enormous treasure. Dantes seeing it as a God sent gift manages to escape from prison and finds the treasure. He then assumes the title of “Count of Monte Cristo” and goes about plotting revenge against those who stole away everything that he cared about in life.

The narrative of the novel is at times gripping to such an extent that you may not want to part with it, even if lightening strikes you. But at times it’s such a drag that you may wonder why on earth you are reading it. But as they say, “Read the masters, not the pupils.” you are sure to find a gem in each and every chapter. Some characters that appear to hinder the plot at the beginning appear later to be an integral of the fold of events. Dumas shows in his exquisite style what a master story teller can really do.

The book is as much about romancing life as it is about cutting away your enemies. It is an adventure story primarily concerned with themes of hope, justice, vengeance, mercy and forgiveness. The Count of Monte Cristo is a true literary classic, and also a ripping yarn that will engage the most reluctant reader. It also has a number of lessons for us today, as we consider the nature of crime, and punishment, and wonder whether our justice systems should be involved in retributive justice at all, or whether it should confine its efforts to rehabilitation.