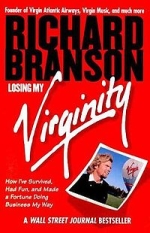 I am usually very fond of biographies and autobiographies, especially involving scientific or mathematical people. However, when, at of the spur of the moment, I decided to buy “Losing My Virginity”, the autobiography of Sir Richard Branson, the founder of the Virgin Group; I was not sure whether I would like it or not. Even at the Airport when I was sitting and waiting for my delayed flight, I thought perhaps it would be a waste of my money and time. But how wrong I was! When I started reading the book, I found I liked it a lot. Quite unexpectedly, that book has left me with a new sense of direction in my life. I am more resolute about a few things which I had never ever felt so deeply before. It truly is a remarkable document showing the path of a man driven by passion.
The first thing that catches anyone about the book is its title. Why would any sane man write a book on how he lost his virginity? But for all intents and purposes Branson is not a sane man, he just lives on a thin border of genius and insanity. And to tell the cautious reader, he doesn’t describe that in his book. The book begins with a view of his childhood and how he had a close knit family. It gradually moves on to his school life, where his teacher remarked that he would either go to prison or become a millionaire, on the day he left school. Later we see that Branson did manage to do both of these things.
Branson like all top entrepreneurs of the world has had times when he could not be sure if he would wake up the next morning to see his company go bust. As a 15 year old boy, when he started Student, a magazine for the youth, he had already set sights on his later to be formed vast empire. From a dingy record shop in the 1970s to owning one of the most respectable brands in the world has been a long and tough journey. And Branson bares it all in this gem of a book. We also get a glimpse of his extremely competitive nature and his love for adventure in this classic piece of work.
We get to see what makes one of the most brilliant businessmen of the world tick. Perhaps it’s his philosophy of having ‘fun’ in business or perhaps it’s his out of the world free spirit with a great sense of adventure. This man, who owns a billion dollar aviation industry, decides to travel round the world in a hot air balloon to set a record, and almost does it. He is a man who doesn’t dither when people come to him with all sorts of crazy ideas. He puts them in a little notebook of his, and sorts them out, and always supports a just cause.
Like many entrepreneurs of the modern world, Branson has stood for so many critical issues that they are virtually countless like the different things with which we associate Virgin with. Branson is a man with a vision of the future that is beautiful and he leaves no stone unturned to achieve his dream. This is what sets him apart from other visionaries and that is what I respect about him. Branson is not shy to admit that he was wrong and perhaps things could have been better, but then he finds what his faults were and goes on immediately to correct them. He is a man who feels as strongly about a young girl in Africa suffering from fistula as he is about his daughter clearing through medical school.
Branson is truly a man of many endearing qualities and having read the book, I have come to admire and respect him for what he is, how he did what he has done and how he has sustained himself in this era of cut throat competition. Branson must be toasted for his luminous efforts at world peace, climate control and all sorts of sensitive issues. The book written in a lucid style with very few difficult to understand phrases or words and is a wholly entertaining piece. It feels like reading a novel, only this time the protagonist is as real as you and me.

Architecture of the Novel – a writer’s handbook

Review: Tarun Gogoi – the inside story of a blunt politician