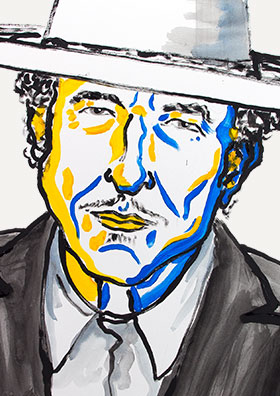 Since yesterday, the name of Bob Dylan was taken as a possible recipient of Nobel Prize in Literature. Of course, very few actually believed it could be true as he was a songwriter. Being a songwriter, the poetic expressions of Bob Dylan needed the support of other artists, like good singer, good music composer and good musicians for the best effect. However, the Swedish Academy has been more flexible in the last few years and playwrights and non-fiction writers are also awarded the Nobel Prize.

He is the first American to win since the novelist Toni Morrison, in 1993. The announcement, in Stockholm, came as something of a surprise.

Mr. Dylan was born on May 24, 1941, in Duluth, Minn., and grew up in Hibbing. He played in bands as a teenager, influenced by the folk musician Woody Guthrie, the authors of the Beat Generation and modernist poets.

“Dylan has recorded a large number of albums revolving around topics like the social conditions of man, religion, politics and love,” the Swedish Academy said in a biographical note accompanying the announcement. “The lyrics have continuously been published in new editions, under the title ‘Lyrics.’ As an artist, he is strikingly versatile; he has been active as painter, actor and scriptwriter.”

The academy added: “Since the late 1980s, Bob Dylan has toured persistently, an undertaking called the ‘Never-Ending Tour.’ Dylan has the status of an icon. His influence on contemporary music is profound, and he is the object of a steady stream of secondary literature.”

In the weeks before the announcement, speculation about potential winners swirled in the literary world and even in betting markets. Some familiar names were bandied about, including the American novelist Don DeLillo, the Japanese novelist Haruki Murakami, the Kenyan playwright Ngugi wa Thiong’o, and the Syrian poet known as Adonis. Very few observers, including bookmakers, had given Mr. Dylan much of a shot.