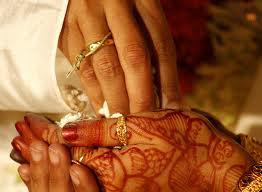 Fancy lights, multi ethnic cuisines, bright colours, gorgeous people and a mood to celebrate sure does sound like festival. And the thought is justified, considering the fact that the big fat Indian wedding is no less than a festival. In India, wedding is more than just a function. It unites two persons as well as two families. As Chetan Bhagat says in Two States “Love marriages around the world are simple: Boy loves girl. Girl loves boy. They get married. In India, there are a few more steps: Boy loves Girl. Girl loves Boy. Girl’s family has to love boy. Boy’s family has to love girl. Girl’s Family has to love Boy’s Family. Boy’s family has to love girl’s family. Girl and Boy still love each other. They get married.”  India is a country that believes in unity in diversity. Being a multilingual country, it is no surprise that there is diversity in wedding types as well. But every wedding in India shares two basic similarities i.e. society and religion. According to mythology , there are eight types of Hindu weddings but India witnesses multi-religion weddings such as Islam, Christianity, Sikhism, Buddhism , Jainism etc.  Not only that; weddings vary according to religions and regions in India.

The essence of a wedding is always the union between two souls but the way of celebration is different.  Western wedding celebrations as compared to Indian ones are poles apart.  Media has evolved as a prominent source which enables access into myriad information related to various cultures. At the outset, be it in popular movies like Mere Yaar ki Shaadi hain, Band Bajaa Baraat, Monsoon Wedding   or reality shows like Band Baja Bride, they give an idea that an Indian wedding is all about “saath phere” along with tradition, families, glitz and glitters, Mehendi so on while in movies like Father of the Bride, a western wedding is about the Bridal Shower, the gorgeous white dress, veil, kissing the bride, wedding cake and of course the immediate honeymoon. An insight will provide that the difference is more than what is portrayed. To begin with, Indian marriage begins with the search of the groom or the bride as arranged marriage is still a prevalent form of marriage in almost every Indian Community. On the other hand, in western countries, arranged marriages are vague. White is the colour of the wedding gown of the bride in western wedding, whereas in Indian, white is more accepted in funerals or ceremonies that mark death. Exchange of vows unites the wedding couple in west whereas in India, the vows are incomplete without the worshipping of the sacred fire. Harpunet Kaur, who stayed in Kansas, United States for a year, sharing her experience regarding weddings she attended in that country, said “The Wedding I attended was very simple. The decoration in the reception hall was done by family members and the bride and groom were there as well, helping in everything”.

he Juroon, where the groom’s mother along with other relatives visits the bride’s house and applies vermillion to the bride along with showering other gifts. Pani tula is another important ritual where the groom’s mother and other female relatives go to a river, pond or a lake to fetch water for the ceremonial bath of the groom. The wedding takes place as per Hindu norms, where a priest carries on the ritual in front of the sacred fire. The post wedding rituals includes Khuba Khubi where a priest narrates the story of the two goddess Khuba and Khubi. The last ritual is the Aath Mangala which takes place on the eight day of the marriage. 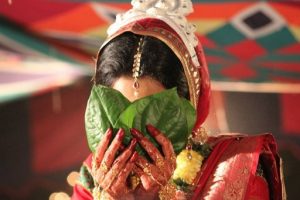 In the eastern part of our country, Bengali weddings in West Bengal indulge in a series of colourful and pompous rituals. Pre wedding ritual includes Holud Kota, where few women of the household grind turmeric and apply to the bride. Then there is the Dodhi Mongol ritual which takes place on dawn of the wedding day, where bride’s hand is adorned with the traditional bangles, Paula and Shakha and the bride is fed rice and curd, the only meal of the day. The main wedding rituals includes Potto Bostro, where the groom is seated on the chadnatolla ; saat pak, where the bride is seated on a piri, lifted by her brothers and carried around the groom in seven complete circles, Mala Badal, where the bride and groom exchange garlands thrice, Sampradan, ehen the bride is given away by an elderly member of the family and finally the Samtadi rituals. After the Bidai ceremony, the first ritual at the groom’s house is Bou Bhat and Bodhu Boron where the newly wed bride cooks for the first time.

In West India, in Maharashtra, morning is the auspicious time for wedding. Before the wedding, Wang Nischay takes place, which is a formal engagement ceremony where kuldevta-pujan is performed in both the houses. One day before the wedding, Haldi Chadawat which is a haldi ceremony, takes place. On the day of wedding, firstly puja is offered to lord Ganesh then a Seeman Puja is performed followed by the Gowrihar Puja. The groom and bride are not supposed to look at each other during the Antarpat ceremony and a silk partition is placed between them. Then the kanyadan and saptadi ritual takes place, similar to those of any other Hindu marriage.

Turning South, In Tamil Nadu, after the wedding is finalised, the bride’s family perform the Paalikali Thalippu/Karappu which involves the decoration of seven clay pots with sandalwood paste and kumkum which is filled with curd and nine types of grains which is watered by married women from both the sides and next day, the pots are thrown into a pond. The bathing ceremony is known as Kalyanaponnu/Kalyanappillai. Prior to the wedding Nandi Devata Pooja, Navgraha Pooja and also Ganesh Puja is performed. On the day of wedding, the groom pretends to leave for kasha; the bride’s father intervenes and requests to accept his daughter as life partner. Bride and groom exchange garlands thrice after which they are seated on a swing and the women throw coloured rice in all the four directions to cast away evil spirit. After the kanyadan,saptadi and mangalsutra ceremony, the couple go out to spot the pole star and star of Arundhati. After those certain rituals take place the groom puts a ring on the bride’s toe. Tamil weddings are held over two days. After the wedding, there is the grihapravesha of the bride; Valeyadal where the sister-in-law present gifts to the bride and the couple indulges in wedding games. The final ritual is Maruvidu Varudal which marks the visit of newlyweds to the bride’s parents.

So, it is seen that Kanyadaan, Panigrahana, and Saptapadi, which are respectively, gifting away of daughter by the father, voluntarily holding hand near the fire to signify union, and taking seven steps with each step includes a vows to each other before fire are the common keys in all the wedding forms. Be it Bengali wedding or Tamil wedding, in spite of diverse rituals certain similarity is apparent in them. The inevitable connection between them is religion. In India, religion is the significant base. In case of both the wedding form, puja is performed prior wedding as well as during wedding.

Music is another connecting tie in the rituals. In a Tamil wedding, the Naathaswaram and the Melam are the two musical instruments that play an important role. The blowing of the conch shell and ululation by the women gathered at the wedding venue are most characteristic of a Bengali marriage. Ululation also adorns Assamese wedding. Fire is worshipped in all these wedding forms. And all the four wedding forms are more than a one day affair.

21st century India has witnessed ample change in the weddings. While people try to cling on to tradition when it comes to performing the rituals, the celebration and receptions has embraced western culture.  “Mix and match” style seems to influence weddings as well.  Prominent poet, Harekrishna Deka says “while tradition has been maintained in Indian weddings, the celebrations have become more opulent among the middle and upper class. It used to be at best a two day affair earlier but is spread to several days concluded by entertainment of guests, food is Indian, but laid out in western buffet style. Honeymoon has been borrowed from the west. In the west it is a sober celebration. But in India, the urbanites make a show of it.” 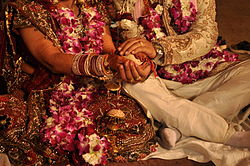 Today, agreeing on the perfect menu is also equally important in weddings. Food buffets have a wide array of sumptuous food ranging from International Cuisines to golgappas. Even theme weddings have become quite popular in India and professional wedding planners are in high demand. Designers put up their best effort to blend in traditional and contemporary attires. Well, in simple words, the west has influenced Indian Weddings to some extent. And there is no denying to that. Syed Yasin, a medical student says that “We have picked up customs that correspond to our city centric lives, like outsourcing the party venue and bachelors parties with drinks and all. But when it comes to the serenity of a small gathering enjoying modestly the institution of wedding, we Indians are blind by our blood. We love pomp and show, cannot live away from it. In fact, I feel it is the west which has embraced more and more Indian elements into their weddings.”

Change is a part of life. But the good news is that, today’s generation has not let down their tradition. On one hand, they try to do justice to tradition and on the other hand, they modify experiment and blend in with other cultures to pump up the celebration. And that is justified as well. Irrespective of any forms, Wedding is just the beginning of a lifelong adventure called marriage .As John Berger says “All weddings are similar, but every marriage is different”.

Hailing from Jorhat, Simona is currently a student of English Literature at Tezpur University. Simona is also one of the best debaters of the University and has represented the university in several debating events.