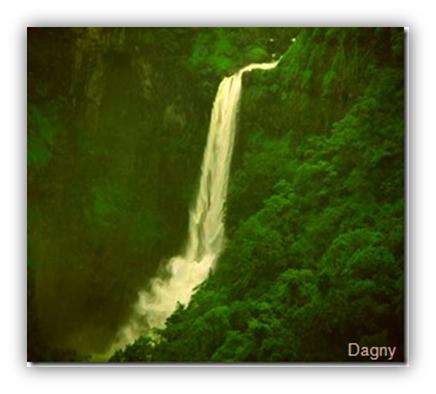 Fried Eye says- Dagny Sol weaves a magic with her words and enthralls us as she recreates beautifully a monsoon afternoon. It is a welcome change from the reality and serious discussions that we were having till now. Here’s A Monsoon Afternoon for you.

She wrapped her arms around her body and shivered delicately. The spray from the waterfall wafted over her in a thin mist, enveloping her intimately. She ran her palms over her arms, rubbing away the goose bumps. A fresh waft and another set of goose bumps began their journey down her body. She could even feel her scalp prickling up. A set and bizarre coincidences had led her to an abandoned Government Rest House deep in a forgotten nook of the Shayadri Mountains. A relic of the Raj, the rest house boasted one VERY old caretaker and his equally ancient wife. They had fallen over themselves when she had expressed a tentative desire to stay there for a day. That day had already stretched to a week and was likely to stretch even more.  She had no idea when she’d be able to drag herself away from the deep tranquility that laid its cool hand upon her scorched soul. It didn’t look like it would be soon. She shrugged her fragile shoulders in impatient dismissal.

Rohit will have to wait until she was good and ready to go back to work and start work on the new project. As for his advances on her person, she will deal with them. In her tawny brown eyes, grey appeared like the spokes of a wheel as they smoldered in annoyed remembrance. Her naturally red fluid lips curled in derision as she polished some of the phrases she intended to say to him. The pearly fair cheeks glowed with indignant color. In another instant, like a flash of lightening, her eyes lost their brooding look and glinted in glee. Yes, she will let him have it across his wind-pipe. He had clung to her like a limpet and needed to be stepped on and ground to pulp.

Last week when she had reached here, the landscape had been dry, gasping with a deep summer thirst.  From the very first walk she had wandered off on, she felt a strange resonance with the land. The trail was dusty and the leaves rustled, recording their protest in hoarse whispers. The mountains were dry, bereft and depleted. They looked as if their capacity for flaunting their green had been burned away in the crucible of the valley. The vegetation had looked scorched in the pitiless summer heat. The ground exhaled putrid warm breath that crept up her legs beneath her saree all the way up her nose. She felt as if she sat in a sauna containing a barrel of rotting leaves.

The lofty mountains had silently taken her in their arms and she had slumped in relief, glad to let go. She had never belonged in the city that was her home. Her small flat had never felt like a place to stay and grow roots. It was a temporary perch from which to take flight. From her first solitary ramble, she had belonged here, in this new and unfamiliar wilderness. The fact had ceased to surprise her.

There had been no waterfall a week ago, just a pool of scummy green water at the base of what had become a waterfall now. She had seen water marks on the dry rocks and knew there was a season in the life of those mountains when water flowed with prodigal abundance. But now, that season was not yet come. The landscape waited, thirsting for rain and life.

Three days after her arrival, monsoon had burst upon the valley in all its glorious and frightening majesty. She had never, EVER felt the rain as she felt it here. The experience defied description. In the city the rain was always a bother. It overran gutters and the filth of an over-crowded city choked the lungs of her residence in malevolent revenge. The rain was an unwelcome intruder, resentfully dealt with. The unspoken message to rain was, “You don’t belong here; we do. Remember your place and don’t fancy that we’ll let you disrupt our life.” In these ancient mountains, rain was a succor. It was eagerly anticipated, longingly desired. When it came, it was gulped in with appreciation to quench a parched thirst which had become all but unbearable through the long months of summer. The valley swayed and danced with delight. The joy of a prodigal’s return was accorded to the truant rain swollen clouds. Nature was primed for growth, pregnant with the seed of unborn greatness in her. She was geared up to let new life burst forth from her.

The woman stood looking at the waterfall fed by the turbid reddish-brown rain. Her right arm was raised to grasp a low branch of the tree above her. In the half an hour she had stood there, dark clouds had gathered overhead blocking out the mid-day sun. It was barely four in the afternoon but it looked as if dusk had already fallen. She knew she should go, it was going to rain heavily and she was almost two kilometers away from the rest house. Once the clouds burst, she would find it very difficult to find footholds on paths slippery with mud and flowing with impromptu rivulets.

She knew she should leave, but she stood rooted to the spot. Her limbs refused to budge. She stood there mesmerized, the tree above her glistening with the promise of rain. One drop condensed on the leaves above her and dropped on her head. Just one drop! She should have been unaware of it. But she felt it running down the parting of her hair, like benediction. it emerged out of her hairline and ran down her forehead and her nose. It stopped there, at the end of her nose, trembling. Then it dropped off, having made its point. She was suddenly overwhelmed with an emotion too poignant to name in words, even in the breathless silence of her own heart. Her tawny brown eyes filled up with an unspoken longing. They overflowed, spilling what could not be contained. In unerring sympathetic tandem, it began to rain.

She was drenched. The flood welled up from deep within her, adding to the rain without. Yes, she was soaked.

Her face buried in the crook of her arm holding the branch above, hanging on to it for support, shoulders shaking violently, she let herself drown in the wild tempest. There were no words in her mind, no discernible sorrow in her heart. Her dry, depleted heart filled up and ran over. It seemed as if the long years of pitiless summer were finally over for her. Her soul drank deeply of the floods released within her. The mountains stood in respectful, aloof empathy silently bearing witness to her cleansing. She surrendered her unnamed sorrows to their stoic keeping. She was freed of her burdens at last.

As the tempest within her subsided having vent its force, the rain too slackened to a thin icy drizzle. In a few minutes, the rain water ran impetuously off the mountain slope. She turned to return to the rest house. She looked up at the path she had to climb. There, a few meters away from where she was, stood a man under another tree. He stood silently, in an attitude of patient waiting, looking directly at her. She had never seen him before. In the instant of her silent inner gasp, the moment was completed for her. It was like a part of her expected him to be there, standing exactly as he was standing, looking at her exactly as he was looking. She held his glance and began to move towards him.

She had never really believed in coincidences- bizarre or otherwise.

I am a corporate trainer. Growth and transformation are not just words for me- they are my passion and calling. I am the student that loves to share the wisdom and insights I come across as I walk my life-path.

I write to help create a moment of still upheaval that accompanies a shift in paradigm and completes the process of transformation.

I have three children who try to keep me in line in matters of behavior and apparel.

I can be read some more at www.serenelyrapt.wordpress.com