A journey that never ends- our life 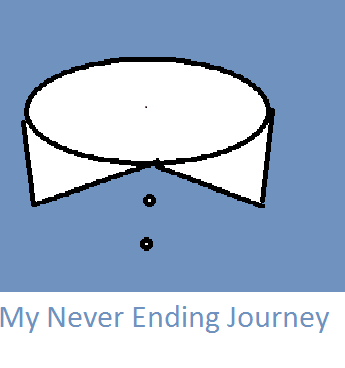 When exactly do we really start planning for our future? As in, setting our aim in life, planning and deciding what career we want to pursue in future. Some might say they do it right from the beginning, as little children, dreaming of becoming a doctor or an engineer, without having the slightest idea what it means to be a doctor or an engineer. And there are some who start thinking about their future when they are matured enough to take those decisions. And there is yet another lot who do not do the thinking, dreaming or deciding at all… it is all done by their parents or guardians. And they are the silent followers of the dreams dreamt by their parents.

Well, for me, the dreaming part had begun right from my childhood. And I used to live my dreams by playing out those roles on my own. I played being a lawyer, a singer and even a teacher. In fact, whenever I had trouble in learning my lessons, I would pretend to be a teacher and explain the whole chapter to the wall, which would make it easier for me to remember the lesson. On the other hand, inspired by reality shows like Indian Idol and Sa Re Ga Ma Pa which had just emerged during that time, I even had plans to take my interest in music seriously and take up singing as a profession. But well, that was never to be. Dreams remained dreams.

And then the real thing happened. I was in the 8th Standard when my sister was doing her M.A in Mass Communication and Journalism in Tezpur University. And having noticed that her work seemed liked fun and seeing her enjoying what she did in those two years, I subconsciously made up my mind to follow her footsteps. I decided that I too want to be involved in writing for the media, or learn how to make television documentaries and radio dramas. I wanted to make television advertisements too. Well, that was all I knew about Mass Communications and Journalism back then.

After that, my plans to make music my life took a backseat and it remained just a hobby. Instead another hobby which had been in the backseat for long came up to the forefront. My love for writing fuelled my desire to study journalism. And that was a decision I stuck with and stood by right till the moment I did it. And boy! What a journey it has been, once I started living my dream!

A year before joining the course at Tezpur University, another blessing by the name of Fried Eye came to my life. I joined Fried Eye, and for the first time, found enough confidence to call myself a writer. And from being a writer, I became a member of the Fried Eye family for good. And a year’s worth of experiences of working in an online magazine did wonders for me when I came to study Mass Communication and Journalism.

Though it was not easy to cope up with the stress of work, I felt this is how it is going to be as a media professional no matter which branch of it we choose as a specialization. Be it Advertising, Public Relations, Reporting, Editing, Photography, Television production, Radio production or Online Journalism, it is no child’s play. But then, is there any profession in this world which is easy enough? If one wishes to make one’s presence felt in the society, one has to go through every kind of difficulty, big or small. And for me, the biggest challenge was to manage time. And needless to say, in our field, Time is of utmost importance. “Deadline” is something we have to meet every other day.

In the beginning, I had to struggle to do all those things which sounds to any layman as “fun”. Be it designing an advertisement copy, or thinking of an advertisement concept, taking photographs for an exhibition or shooting for a news story, writing a news report or editing reports written by others, preparing countless PowerPoint presentations, recording for a radio talk and editing it or designing a website, everything has been like a huge mountain that I just climbed. It might sound crazy, but even watching a movie has started becoming an assignment for me where instead of enjoying the story and the songs and dances, I end up analyzing various aspects of the movie. But at the same time, in the last one year, I have learnt more stuff than I ever have in my entire life.

And now, I have another year to learn it all and soon it will be time for me to actually be a part of the “media” which we all happily criticize or praise every single day. Maybe I will end up as a reporter, as a journalist, work for a newspaper or magazine, or a television production house or even end up as a teacher. But no matter what lies in the future, the fact remains that I have followed my heart, and will be living my dream, when it comes to living my life.