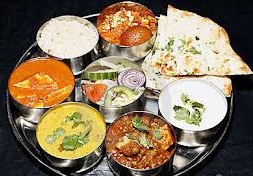 January 15, 2013 Off By Fried Guest
by Bhookhhad Zombies
Fried Eye note :- Sometime during September 2012, a few food enthusiasts, some really enthusiastic food enthusiasts started with a venture called The Eat-ventures of the Bhookhhad Zombies (see how enthusiastic they are) which will endeavor to bring before you food haunts in their own bhookhhad style, – a style that is definitely not zombie like. Here is one of their lively and colorful review of the  Dara’s Dhaba, Dahisar, Mumbai
In Mumbai, Western Expressway is one of the best roads to drive on. One fine day, the zombies decided to go on a drive towards Ghodbunder, which is the northern part of Mumbai, frankly it is in the Thane district and can safely be termed as outskirts. As they didnt have breakfast, they thought, they would eat on a roadside dhaba ( Not having breakfast was the part of the plan as they really wanted to go for the kill)

They were actually looking for this place called ‘The Haveli’, they kept on driving and driving but  couldnt find the place. At the same time their zombie instincts were rising and hunger was about to strike. While Amylicious was the first one to get hunger attack, SweDelight also was getting the pangs seating beside her. Viking decided to take a u turn and go to one of the dhabas nearby. And after five minutes of taking the turn they reach this huge place call Dara’s Dhaba. (I doubt Dara Singhji had anything to do with the dhaba). And once they reach the Dhaba, they just couldnt wait to pounce on the menu 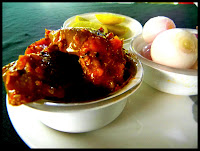 As you expect in a dhaba, the menu has both North Indian and Chinese dishes (One thing I don’t understand about Indian restaurants that, every restaurant has to have a Chinese menu, why this fascination for Chinese food? I would like some comments please). Coming back to our zombies, they ordered for A special punjabi chhas ( butter milk), Bhindi kurmura ( Crunchy ladies finger), Chicken Aftab ( Shredded chicken with capsicum; no connection with Mr. Shivdasani), and Butter naan’s made from wheat ( Sometimes it’s really funny how the zombies act so stupid; they order wheat nan because its healthy, and at the same time they order for butter. Grow up kiddos). 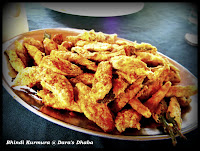 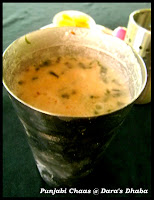 The chhas came in a 500 ml heavy steel glass, with full of ginger, jeera (cumin), dhaniya (coriander), chillies and some other masala. One sip and Viking realised, on other part of the town, this chhaas could have been easliy passed off as Raita. Though it was tasty, but the dahi (curd) was not battered properly so he couldn’t have it for long. And then in comes the bhindi kurmura. Though it looked like mirchi cutlet, but it is actually bhindi dipped in a besan (gram flour) batter, deep fried and lemon chilly powder sprinkled on it. they thought it was damn good. 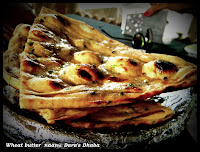 The chicken aftab came soon followed by the confused naan, and Amylicious got pissed with the capsicum strips in it. The food went out damn fast and its time for desserts so they called for the usual suspects, jalebi and rabdi. Surprisingly the sweetness in both the dishes were perfect and all of them were quite happy by the end of it. Swedelight was thinking of wasting one jalebi ( By the way she already had wasted half naan), but Amylicious came to the rescue and finished it off.

So the zombies got saved once again by the food that they got in Dara’s Dhaba. And since they feel the responsibility as good zombies to spread the hunger, lets hear from them what they feel about this experience.

Mealtime Musings- A Rambling Rumination on Food and I