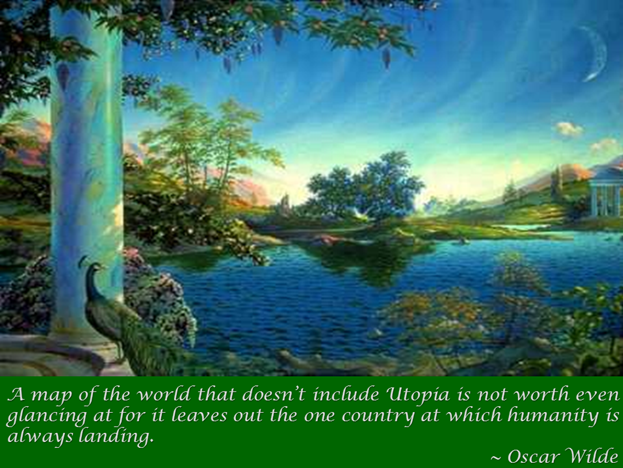 The word was first used in the book Utopia (1516) by Sir Thomas More.

It refers to an imagined place or state of things where everything is perfect. When you are utopic, you are defining your highest vision of your life. You are describing the best that you think the world can be. You are diving deep into your consciousness and returning with the most lustrous pearls in your depth. It isn’t a definition of the state without; it is an unveiling of the state within.

Definitions of utopia have included a range of visions as diverse and vast as human imagination. But there are some (almost) mandatory features in almost every one’s concept of utopia.

It has lush lands resplendent with rivers of milk and honey. Chocolates and delectable desserts grow on bushes. No one needs to work hard. They have mildly strenuous jobs for about twenty minutes a day leaving them to gambol about singing and languidly eating chocolate (also other, less exotic confectionery) by the tons.

Despite an exclusive diet of sweets and savories, there is no illness. People never gain weight. They gad about with plastic pink cheeks and enormous blue eyes wearing prim garments. As befits the place, there is no meanness in the place. In fact everyone is so good they wouldn’t know meanness if it kicked their shins and stuck a four inch blade between their ribs.

Putting the skids under the seven deadly sins wouldn’t be a bad thing at all, truth be told. It’ll get rid of the pesky sins all at once and leave the field a lot more conducive for those not of a utopia indulging/ abuse frame of mind. Was that an undignified (read juvenile) whoop I heard there? Tsk tsk…!

There is no suffering. People don’t fall down the stairs and break their silly bones. When they take a toss from their pretty red bicycles, they land in the softest hay. When a shiny red Jaguar (there are only the highest end cars in Utopia. They all run on water- thus producing no smoky smog to choke the life out of you) rolls over you, some kindly soul just scrapes you off the tarmac  with a handy spoon and you are as good as new. If not better.

No one dies in Utopia. They live on and on forever. Happily ever after was a phrase coined in a utopic moment, in case you ever wondered. There is always a balmy sunshine abroad. Birds are a-twitter and exotic, colorful butterflies a-flitter (poetry!). The green is the greenest green, the blue its bluest blue. All other colors trying desperately to catch up with the leaders- and nearly making it. Pleasant, I am sure you will agree.

With nothing to do all day and everyone to do it with, the state would be idyllic. With no fear of gaining poundage, you would stuff your face with goodies like there’s no tomorrow. On and on. Sometimes you’d stuff yourself to the gills all by your ownsome, sometimes you’d visit people (or they would visit you) and you’ll stuff together. Did I hear a soft sigh there? Ummm… I know, right?

Since no one would be in pain, people who get their kicks from being kindly to those less fortunate than themselves will have nobody needing their cloying ministrations. We’d clean up the language of useless adages like no pain no gain. In the first place, they’d be Not Applicable. In the second, when there is already unlimited chocolate, what are you going to do with more? It’s like saying you want to multiply infinity by two so you’d have two infinities instead of one. Yes, it’s that silly. Very silly.

Which is all very well. But what about me?

I hate chocolate. Sweet things make me feel ill. I am very fine with Jaguars running on water and the whole sunshine and birds-n- bees scenario. And don’t you dare accuse me of kindliness! I haven’t a kind bone in my body! In short, the utopia described above is anything but- for me. In the colloquial, it sucks! I want OUT!

My utopia is a lot simpler. As I said, I dig the cars. Those, we will keep and wipe out the rest of the gawdawful stuff. As for sweetness- of any kind- you don’t want to get me started on that, do you?

I’ll take the pain (and the gain). I’ll take suffering and back breaking labor. I’m very fine with death and loss. I can take human fickleness and am willing to be betrayed. I can deal with having my heart broken and my love spurned. Disappointment and hurt don’t scare me anymore and I can impudently cock an irreverent snook at them.

Just give me a world where I don’t have to compromise my integrity.

That’s the Utopia I want.