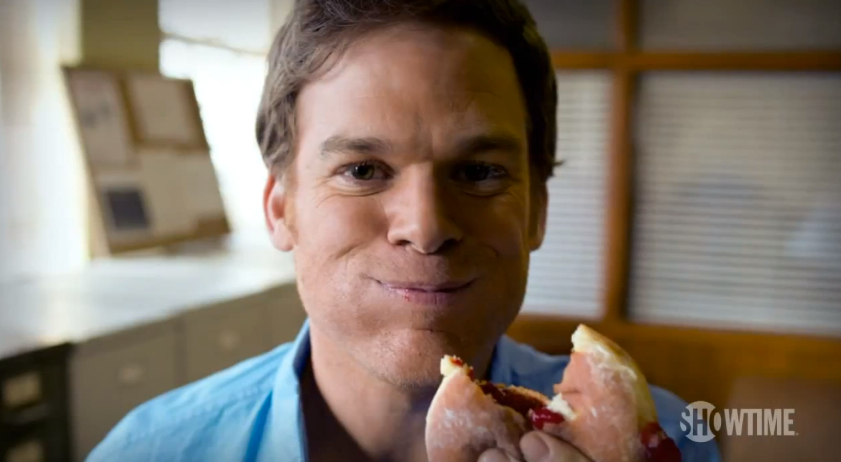 Dexter, arguably the best series on earth has come to an end and I’ve been thinking a lot about it. About how it affected us over the last six years, about how it became a part of my life in this time, about how I refer to Dexter at every small thing that happens in my cereal killer life…

Thousands of people across the globe have been affected and influenced by Dexter in many different ways. Some became serial killers, some started having conversations with their own selves, some even started believing that they don’t have emotional connect with people after the first season and the same people returned to normalcy with Dexter connecting to different people in different seasons. But for me, Dexter influenced me into generating some weird eating habits over the years.

I never liked having coffee in a takeaway cup, it always spills. But after seeing Dexter having coffee like that in the morning, I had started doing that for some months and then one day it spilled really bad on my new pant. That went out of the window since then.

In one season Dexter ate a sandwich while driving his Ford. I drive a ford, and for the next few months, every morning I would pick up a sandwich from ‘Birdy’ and eat it while driving. Man… it was damn tough concentrating on both.

I hated French-fries. But have you seen Dex and Deb munching on the delicious French-fries on the double date in the first season? Gawd, I am still addicted to French-fries since!

Have I already mentioned Lundy’s Ham and cucumber sandwich which I made a few times at home afterwards, always got fascinated by the different shaped donuts, the big-ass cheeseburgers that he hogs on at each date, the tomato spaghetti Dex makes, the Mexican fast food Deb eats from the food truck, makes me hungry each time I watch the show

But nothing beats the beef steak that Dexter makes. It looks succulent, soft, juicy, well done and whenever he eats it, I feel that it is melting inside my mouth. Like Deb says, ‘it must be worth living for’.

So with the end of this show, I feel that some part of my life would go missing from now on. Well being a foodie, it’s normal for me. And why wouldn’t it be? Dexter makes me more hungry than Gordon Ramsey does…

[The writer is the Director of Mango People Media and has been associated with the TV Industry for close to seven years. When he is not working, he is writing songs and poems or just cooking delicious food for anyone who drops in by his house]