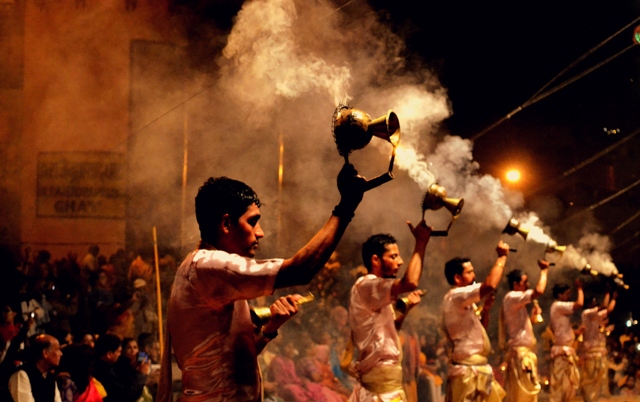 Varanasi- the beating heart of the Hindu universe

“The place God calls you to, is the place where your deep gladness and the world’s deep hunger meet.”

Varanasi -The place-where the most intimate rituals of life and death takes place in public. Situated amidst the Ganges valley in Uttar Pradesh, Varanasi is an epitome of spiritual majesty. The sights, sounds and smells in and around the ghats can be overwhelming at times but the charm of Varanasi will always impress you. Varanasi, a perfect blend of myth, legend and religion has 84 Ghats along the river. Some of the known ghats which are used for cremation are Dashashwamedh, Manikarnika, and Panchganga. 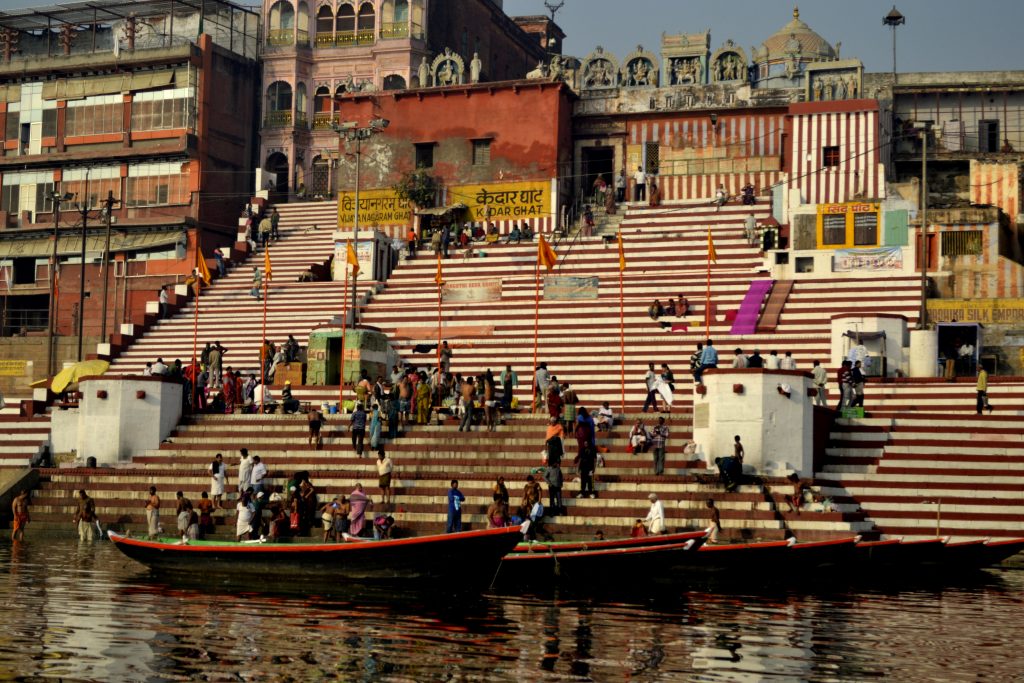 Varanasi offers a spiritually enriching experience that is absolutely breathtaking. Mystical aura, miraculous waters and ethnically sculpted temples define this sacred land. This place is always known at various times in history as Kashi and Benares. It is the most blindingly colourful, unrelentingly chaotic and unapologetically indiscreet places on earth. If you’re ready for it, this city of light may turn out to be your favourite terminus ever. Pilgrims comes to the ghats lining the River Ganges to wash away a lifetime of sins in the sacred waters.

This old city is situated along the western bank of the Ganges and extends back from the riverbank ghats which are too narrow for traffic. Even though the narrow lanes are disorienting, the popular hotels and restaurants are usually signposted for easier access. One of the greatest things about this place is, however lost you become; you will sooner or later end up at a ghat. A walk all the way along the ghats and labyrinth of alleys will surely be a memorable plug-in in your travel dairy. It is not suggested to travel to Varanasi during immediate monsoon, as the river level remains too high.

One of the most famous rituals, performed every evening in Varanasi is Ganga Aarti. During this the city gets ignited with lamps, accompanied with poignant chats… (Photo by Mukund Prabhakar)

One of the most famous rituals, performed every evening in Varanasi is Ganga Aarti. During this the city gets ignited with lamps, accompanied with poignant chats along with fragrance of incense filling the air. The sight of deeply worshipped Maa Ganga looks absolutely spectacular. It attracts millions of devotees who seek spiritual peace and deliverance from the inescapable bondages of the world.

Varanasi is not famous only for it divine repute but also esteemed for its rich contribution in the fields of music, art, dance and education. Beneras Hindu University mostly popularly called BHU is the famous icon of Varanasi. A visit to sprawling campus of BHU is must to witness the blend of culture and education. 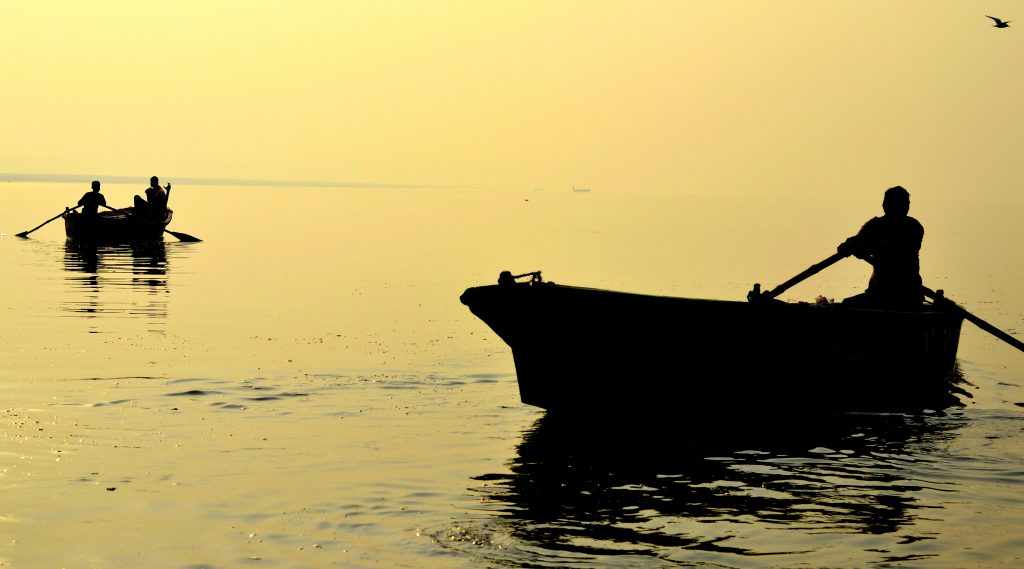 An essential Varanasi experience is a dawn rowing boat ride along the Ganges. (Photo by Mukund Prabhakar)

An essential Varanasi experience is a dawn rowing boat ride along the Ganges. The river is sadly one of the heavily polluted rivers in the world but its surroundings leave a lot to expect. Perhaps you will still be amazed to see how the river draws you towards it. You may take a boat ride to take you from one ghat to another – each ghat is with its own history and myth.

Graffiti on the walls

The narrow crowded lanes are a fantastic experience and the culture and religion come alive in these picturesque alleys. The walls of Banaras will surely catch your eyes and glancing at them you will feel every wall is saying you a unique story. The numerous Graffiti on the walls of Varanasi Ghats are thought provoking. If you look closely, there are so many interesting graffiti ornamenting the walls. Few graffiti are out of place, yet gorgeous.  Few graffiti are mythology based; you will find Ganapati, Shiva in several avatars, in shocking colours yet captivating. Also you will find graffiti which are abstract ones, painted with random words and letters scribbled as a challenge for a passerby to understand.

Random chat with the Sadhu & Sanyasi 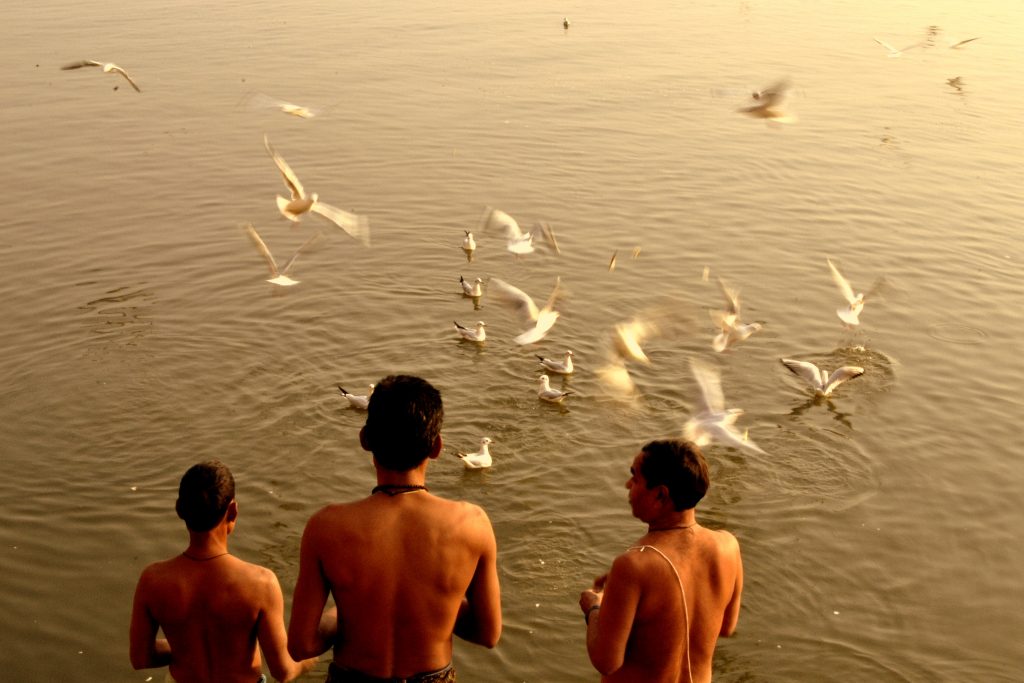 Sadhu & Sanyasi – As the galis run towards or parallel to the ghats, you will see many Sadhus and Sanyasis who are in isolation from anything worldly (Photo by Mukund Prabhakar)

As the galis run towards or parallel to the ghats, you will see many Sadhus and Sanyasis who are in isolation from anything worldly. They are popular for the most extraordinary attires with colorful beads and ash spots on their forehead. In Varanasi sadhus and sanyasis are highly respected and valued and they will always have numerous stories to share from about the heavens, Shiva’s city, and other supernatural phenomenon. You can always catch up a chat with them as most of them are very friendly and will allow you to click pictures of them or with them.

Varanasi is magical place, full of history, meanings, symbols, culture and religion. It is always known for various things including the MahaKumbh, held every 12 years is one the largest gathering of worshippers from round the globe. Associated with encouraging the culture of Sanskrit, Yoga and Hindi language, it is renowned for Banarasi Silk Sarees as well.  Reaching Varanasi is not a difficult task as the places is connected well. The distance from Delhi to Varanasi is approximately 800 kms. There are a number of good and cheap hotels in Varanasi catering to a very large tourist every year.

People visit Varanasi for all different reasons. Personified with India’s enduring cultural traditions and spiritual values, a stay in Varanasi is a journey towards discovering eternal bliss of mind and soul.

How to experience the best of Manipur, Assam, and Meghalaya in 2 weeks and a bit (Part I)