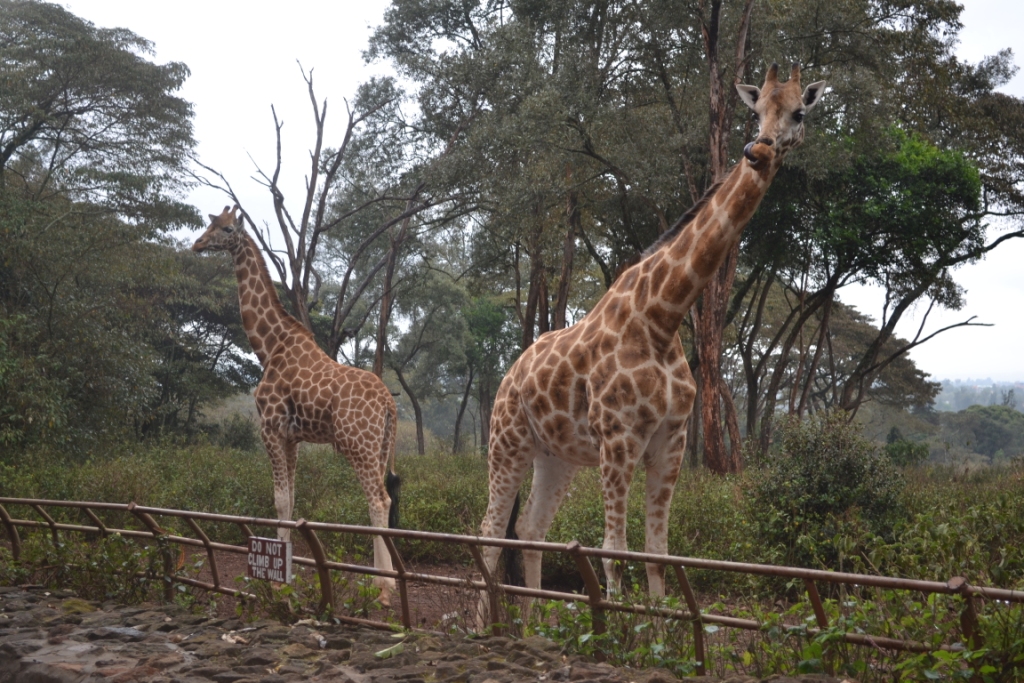 “We are astonished by the long necks of the Giraffes but never look at their short legs.  Rothschild Giraffes have black patches inside brown buttons all over the body. But there is no spot below knees. As if they are wearing a pair of white stockings. With this feature, Rothschild Giraffes are differentiated from other nine sub species of Giraffes viz. Massai Giraffe, Reticulated Giraffe etc. In fact, Giraffes of various sub species are identified by the their typical pattern or design of brown and/or black spots over the coats.”

These were the words of the young nature educator at the small Nature Education Centre of Giraffe Centre at Nairobi, the capital town of 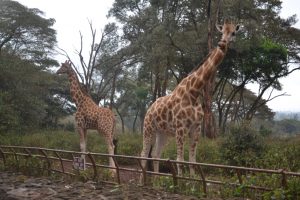 Kenya, Africa. Inside the education centre, a small group of curious visitors had converged at a very small auditorium which looked like a well shaped performance stage. A few were sitting on the small wooden steps and rest were standing around the semicircular gallery. But everyone was glued to the pictures of three varieties of Giraffes hanging on the wall. On the wall, enlarged photographs were there of Rothschild Giraffe, Maasai Giraffe and Reticulated Giraffe. Massai Giraffes are characterised by the irregular starry pattern over white and chocolate brown coats whereas Reticulated Giraffes have very distinctive white lines running through the reddish brown patches all over the body.

Walls of the gallery were decorated with the award winning drawings / paintings of wild life done by the visiting school children. Centre do conduct painting competition on wild life for the school children who visit on a school trip. Those paintings by budding artists are sold to visitors to raise the fund for running the organization.

The Giraffe Centre, located at Langata of Nairobi, opens at sharp 9 o’ clock in the morning and remains open till 5 pm. The entry fees has two different structures – one for the residents and another non-residents. Resident adult pays 200 Kenyan Shilling per head and 50 Shilling is per child. Whereas an adult non-resident visitor is levied 1000 Shilling as entry fees and 500 Shilling for children.  There was rain in the early morning in this month of November (2013) which was normal for Nairobi. Though the rain had stopped, the sky was cloudy and ground was wet and slippery. In spite of odds of nature, several visitors had flocked at the gate of Giraffe Centre to experience the nature’s one of the best show cases. Giraffe Centre is run by the Kenyan wing of African Fund for Endangered Wildlife (A.F.E.W).

It dates back 1979, when A.F.E.W, Kenya was established by Jock Leslie Melvile, a Kenyan citizen (British origin) and his wife Betty. A.F.E.W , USA was later started by Betty. Nature lover Betty was pained to note that over the years, the population of Rothschild Giraffe had come down drastically and they were on the verge of extinction. According to the available statistics, by 1970, number further reduced to below 170 and it was declared endangered. It will not be out of point to mention here that once upon a time there was Asian Giraffe too. But sadly they’ve met complete extinction. To rescue Rothschild Giraffe from being extinct, a few of them were relocated at Ruma Game Reserve and some at Lake Nakuru area. Betty brought two young Rothschild Giraffes (one male – Marlon who passed away at later year and another female – Daisy) from there to Langata area of Nairobi. That was the beginning of a new chapter of nature care.

Though the program started in 1979, the centre was opened by Jock and Betty, particularly for the children, to visit and experience, in 1983. The main activity of this centre is breeding of Rothschild Giraffes and releasing them in the wild environment. At the same time, it plays a significant role of educating the mass, specially the younger generation, about the importance of nature in our lives. It also introduces school children of Nairobi and surrounding areas with the rich heritage and abundance of nature and its flora and fauna. We understand that during 2011 – 2012 alone more than 60,000 students have visited the centre which is quite an impressive number in this era of Face Book and mobile phones. It also creates awareness among people about the ongoing human-wild life conflict because of ever growing demand of land both for urban as well as agricultural purpose.

The guides of the centre takes people for a walk through the forest to enjoy the close feeling of nature. One can hear chirping of birds above the trees. It is said that the sanctuary forest of Giraffe Centre is home of about 178 varieties of birds. Warthogs with two curvy white teeth disappear  in the bushes as suddenly as they appear. Giraffes are off course visible either at the centre or within the forest. The area of the protected sanctuary is going to increase from 60 acres to 100 acres, much to the relief of living creatures. 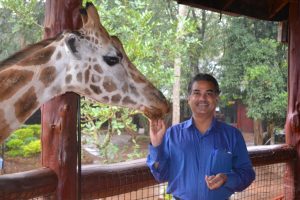 Though Stacy and Lynne came closer to us for the feed, others preferred to maintain distance. Not because they do not like us or the feed, but they opted for fresh leaves from the trees in the sanctuary. From the circular shaped balcony we could see that Helen, Kelly and Betty (identified by our guide) were busy in chewing the green leaves from the trees at a reasonable distance. At present there are total 10 Giraffes at the sanctuary. Others are Jock V, Salma II, Edd and Ibrahim etc. We were told that Ibrahim was born on 03.10.2011 and thus has attained the age of 2 years. He is getting ready to leave the centre and move into wilderness. A Giraffe at sanctuary once reaches the age of two years, it is normally released in the wild, unless is required at the centre for breeding. Pregnancy period for Giraffe is 15 months. From this sanctuary, Giraffes are periodically sent to different parks. Sandy II was sent to Soi Sambu region during Oct 2003. During Dec 2007, Mac was released to Mwea Park. Since inception in a span of 34 years, nearly 50 Giraffes have been released to different reserves or parks. Today Rothschild Giraffes are found only in Uganda and Kenya.

Feeding the Giraffes at the Giraffe Centre with our own hands was an out the world experience. Giraffe is the tallest creature in the world. A mature male Giraffe is about 16 – 20 feet in height. Out of which, the length of the neck alone is 6 – 6.5 feet. So for feeding this tallest creature we had to climb the stairs to reach the semi-circular balcony and was amazed at by being face to face of Lynne and Stacy. They are so adorable and lovable that we immediately fell in love with them. There was a bucketful of nuggets which looked like broken coloured chalk sticks of classroom. We took those nuggets in packets and started feeding them. Our guide advised that to offer one piece at a time. Feeding process was simple –  hold out one piece of nugget with fingers and they will stick out their 20 inches long tongue and will lap it. Some dared to hold the nugget piece between their lips like cigarette. Giraffe brought her face close by and took it in a snap, as if she kissed the visitor.  A kiss to remember forever, after all it is a kiss by a Giraffe!