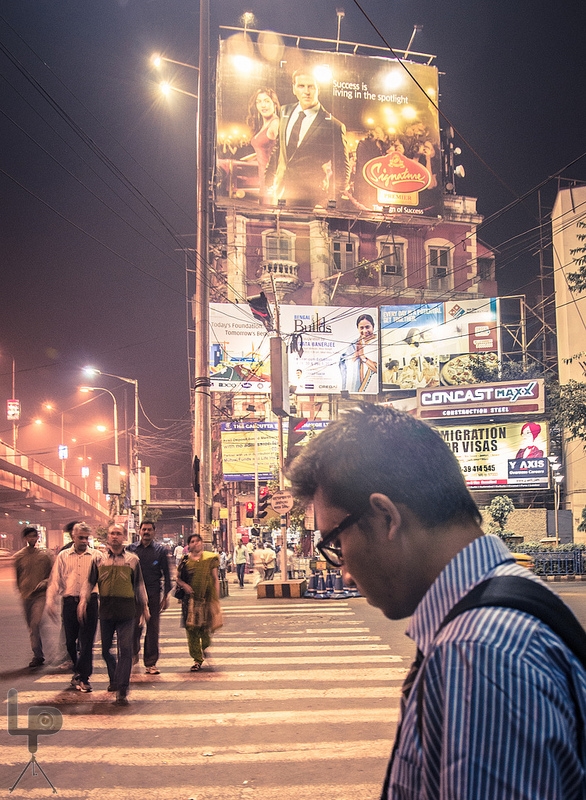 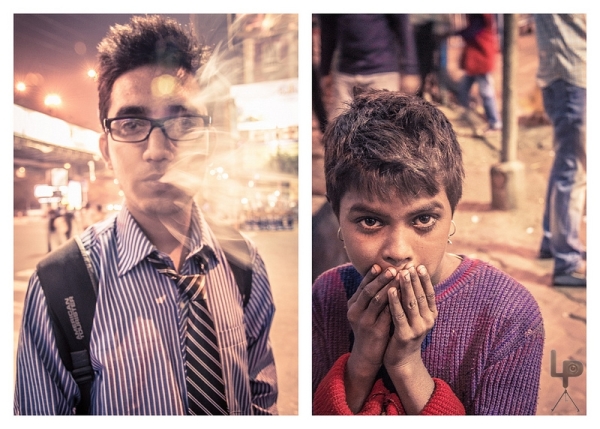 It has been a hard day’s work. All those who are right now employed to a desk job would agree with me that someday it so happens that suddenly you have so much work pressure that you cannot even look up from your desk to take a breath, and someday you seem to have no work, and you sit there, and rattle your brains with thoughts varying from the number of aliens in our universe to the number of legs of a centipede. Today, for me has been a day when I had to crane my neck over the numerous files that piled up on my table pushing me to do a good amount of overtime. When I looked up, hardly anybody was there in the office, except for the septuagenarian Bhushan lal, who was now dozing off sitting on his chair near the main entrance.

When I came out of the office and into the street of the bustling Kyd Street, I decided to walk a bit till my mind gets freshened up. I lit a cigarette and decided to walk down upto the Exide crossing where I’ll board any bus plying towards the south. Having walked this stretch several times before I was very much pleased to have been poised with an option of a chance encounter with some of my old friends while crossing Nandan. I stopped mid way at the Park street metro station just to find myself carrying a plate of puri ( or as we bongs would say, ‘kochuri). I realised, I was hungry when the first few kochuris disappeared in my mouth within minutes. There’s a small isolated seating behind the puri stall. I lit a cigarette, took a long puff, and sat there looking at the huge amount of people bustling by. I was actually looking into nothing. It might have happened with everybody when u keep staring at one direction, your eyes get transfixed and the people moving in front of you become a blur as if you have shifted your focus of your eyes to some distant land ignoring the people of things that are in front of you. There was cool breeze from the Maidan, which ruffled my hair. I took another puff of smoke. And then there was a sudden tug on my trousers.

“Ek ta taka dena”, a boy ,bare chested, of hardly 8 years of age with an over sized pant tightly fastened to the rickety body with cotton ropes and a face smeared with dust and false hope stood in front of me itching his ear asking for some alms. I also noticed his brother, probably a year or two younger than him, looking at me and leaning onto the footpath railing from which the coconut rope hung, burning slowly, which the ongoing cigarette smokers use for lighting their cigarettes.

“Khaini ajke dada de na kichu “, he kept on pestering for some money as he tried hard to convince me with sad faces that he hasn’t had any food today.

The boy was now pulling my hand. I tried to look at the impeccably beautiful girl standing on the opposite side of the kochuri shop waiting for her unknown visitor, and thought how embarrassing I might be looking to have to encounter this nagging child beggar.

“Hobe na ekhon jah”, I denied any money and waved him off as he was leaning on me. I could well notice that his brother who was leaning on the railing with his eyes transfixed on me was now quite disinterested and now squatting on his haunches and patting a stray dog lying by his side.

“Eh ! biri khachche poisa nei”,
the boy shouted with utter disgust. He pinched my arm. I looked at
the girl. She wasn’t looking at me.

I exhaled a whole puff of smoke onto
his face –

I was not sure if my actions were
justified. But all I wanted was to sit there alone and think nothing
to clear my mind off.

“Abbey”’ the boy screeched
and made a face which showed his utmost hatred for me. He then
rounded up his fist as if to hit me, made a tough face and went back
to his brother who was still sitting there and now was pulling the
ears of the dog and hugging it. I could tell the dog was enjoying it.
They were calling him ‘Lali’.

A strange choice she made
It seems, to be with him
Stranger still, I chose
These lesser God’s children
Over the rose! 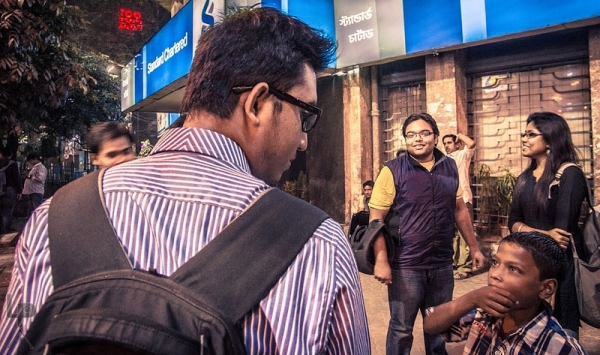 I heaved a sigh of relief and took a puff of smoke, exhaled it and looked into the direction where the girl was standing. She was there with a guy with huge muscular built and strange beard. They were holding arms and laughing amicably. With a strange feeling of disgust I threw away the cigarette. The two brothers were now lying on the footpath with the dog lying between them. Once of them have put his leg around the belly of Lali. Lali was panting with his tongue out. Lali’s eyes fixated on mine.

“Hain tui, edike ay”, I called the elder brother who has been pulling my arm just few seconds before.

“Poisa debe”, he said to his brother and ran towards me.

No man can love,
These kids like he,
A dirty mongrel
They call him: Lali 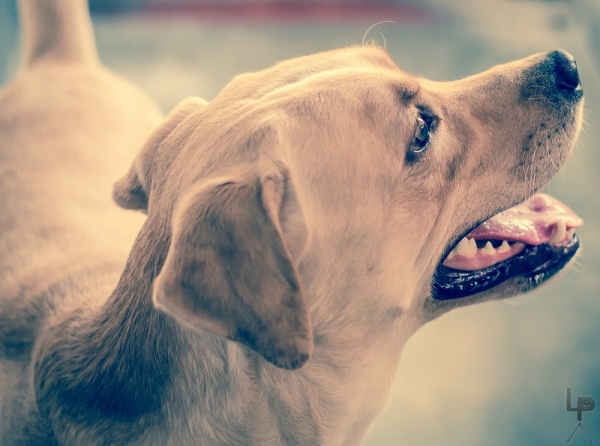 “Lali ki tor posha?” I asked him if he knew the dog.

“Yes he lives here with us on this foot path dada”, he said but he wasn’t looking at me. I noticed him looking at the kochuri shop while he kept on saying, “Ei khanei ghumaye”( even sleeps here with us).

He started itching his head. I picked up a 10 rs note from my pocket and gave it to him. 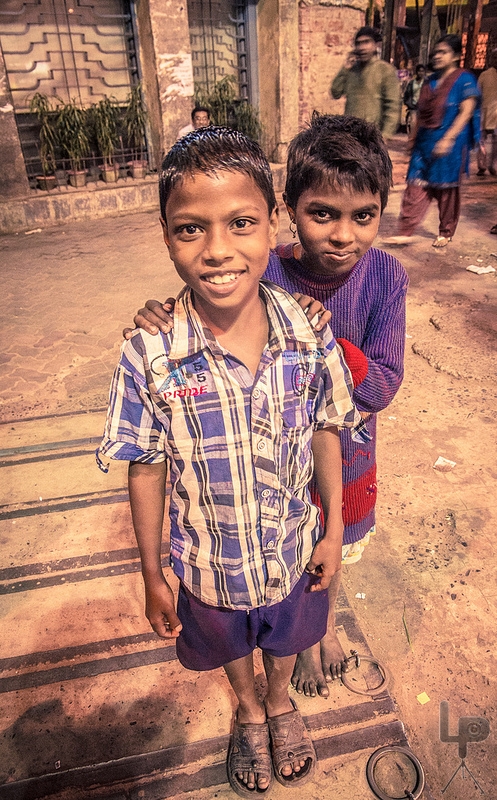 I had to call his brother again. I took him to the kochuri stall and bought him a plate of kochuri.

And then he told their woes
and what they daily undergo 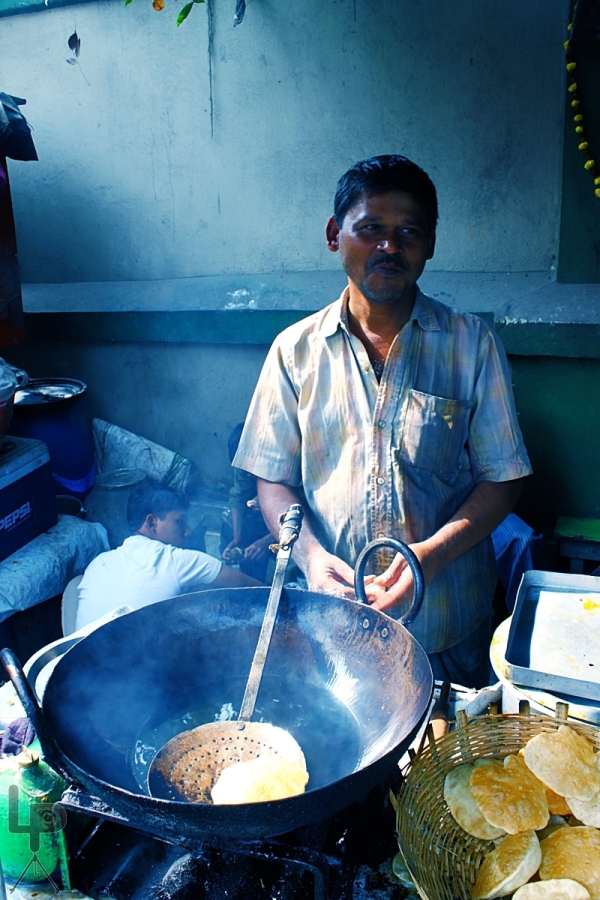 The brothers, the dog,
Their story, their strife
Their home, the pavement
Their way,… this life

I was paying my bill and before walking towards Exide I glanced back at them. I could see the mother less brothers trying to feed Lali with the kochuri. They were taking a bite and putting some into Lali’s mouth. Lali seemed happy and so were the brothers. They were laughing loudly.

All I remembered was Lali and the dust smeared children of god. I felt happy.

NB : CIGARETTE SMOKING IS INJURIOUS TO HEALTH AND ARGUABLY CAN CAUSE CANCER . ALTHOUGH IT IS EXTREMELY PLEASING TO HAVE ONE.  PITY HOW THE BEAUTIFUL THINGS IN LIFE COMES WITH ITS OWN DEMERITS.