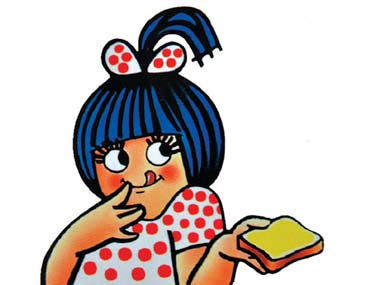 Almost all of us have grown up and even old with “Utterly Butterly Delicious”, the quintessential tagline of one of India’s most loved brands, Amul. And if the tagline is quintessential, then the figure that goes with the tagline is memorable. The chubby cheeked girl with the big naughty eyes has not only been a brand ambassador for the biggest milk producer of the world.  What began as a simple adverting campaign ended up being one of the most popular icons in the world.

Conceptualized in 1967, the Amul girl has been a symbol of everything occurring in the everyday world. From sports to science, from literature to music, the Amul girl covers every topic in her own funny way. Amul has grown from being a small village initiative to being one of the largest milk producers in the world. Amul showed the world the power of collaboration and the “Utterly” wonderful mascot has been an inspiration and a symbol of Amul’s rise. As Amul’s popularity has risen, so has the little girl’s.

Starting with billboards, the Amul girl went on to rule every medium of mass media from newspapers to the internet. And even after 50 years of ruling the air, the Amul girl still does not have a name. Conceptualized in 1966 by Sylvester Da Cunha and created by Eustace Fernandes, the moppet was created to grab the attention of essentially the homemakers.  Amul was a growing brand then and what better way to grow business than to be a part of every household. And the mischievous cute little girl has done just that for Amul-made it a household name.

The Amul girl is not just creative but also adaptable. The round face, the large naughty eyes can be adapted to any person or personality and that is how the popularity has skyrocketed. Bringing satire instantly out of any situation has been the trademark of this moppet. But with popularity also comes controversy and this little girl has had her fair share of it.

Even with new mediums of communication, this little girl has been a face the billboards have loved. And with every New Year she grows only more popular. Here’s to another fifty years for the Amul girl!!

The cult of Old Monk

The knives of love