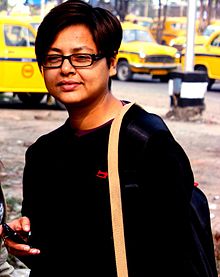 From Rooh to a near Roohani love story , Simple Gogoi has simply come a long way and with her movie Tumi Jodi Kuwa releasing on June 14th, she is all set to rule with her debut. The lovely lady from Jorhat was formally trained in advertising, editing and direction from Moscow state university of culture and arts. She started her career in show business with Rooh the Zee TV production and assisting in many other projects.

She made her foray into the Assamese movie industry in 2004 and after that there has been no looking back with some mega serials like Aaakakh, Priyanka and Anurag tumar babe. A female in a predominantly male industry is slight rare to see, but to see her climbing the ladders of success is indeed inspiring for up coming movie makers of the region.

We had the good fortune to catch hold of her who readily agreed to share some sound bytes with Pramathesh Borkotoky , the Chief Ed of Fried Eye, about her first directorial venture in a candid manner. With the release hovering around less than a month,we had expected her to be a bundle of nerves, but surprisingly completely at ease, confident and totally Chilled.

PB-What were the challenges you faced during the making of the movie?

SG- We had to avoid a few scenes like a helicopter shot due to financial constraints. There were date problems as one of our cast had to go for theatre. And one the most unexpected was fixing the date for releasing the movie as many movies are releasing at this time. We were unaware that many Assamese movies are also coming up during the same time

I have completed a 2 years diploma in film making in Moscow state union of culture and arts. After that I assisted Manas Adhikari for two years in Guwahati.

PB-What is the story of the movie about?

SG- It is about friendship, trust, love, pain, ambition, music. It is about the regular problems of the young generation.

PB-You also worked in Mumbai. How was the experience?

SG-I did work in 2-3 projects but I came back to Assam.

PB-How much time did it take to complete the movie?

SG-The mahurat was done on 28th may’12. The shooting was completed in June. We have completed the post production. Now the only hitch is getting the dates of release. We want to give it an all Assam release.

PB-Are there any plans of releasing the movie outside Assam where there are Assamese pockets.

SG-No. We have not yet thought about it.

SG-There is another movie in the pipeline with the same producers. Hope Tumi Jodi Kuwa gets good response. We have learned a lot from it and we will apply that in our next movie.